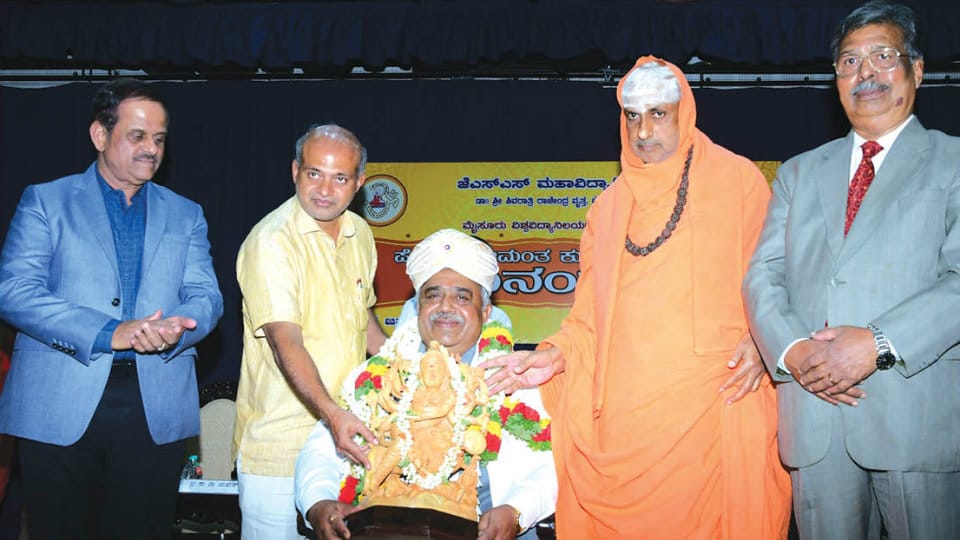 Mysuru: Apprehending that certain groups may target the University of Mysore (UoM) Vice-Chancellor on administrative and academic fronts as part of a larger conspiracy, Tourism and Sericulture Minister S.R. Mahesh advised VC Prof. G. Hemantha Kumar to be wary of such groups.

He was speaking after felicitating VC Prof. G. Hemantha Kumar at the felicitation programme by JSS Mahavidyapeetha at JSS Women’s College at Saraswathipuram here on Sunday.

Maintaining that the Government appointed Prof. Hemantha Kumar as the VC after considering his credentials, Mahesh said that past Vice-Chancellors of UoM have contributed in their own way for the growth of the University.

Recalling Prof. Hemantha Kumar’s journey from being a guest lecturer to the University Vice-Chancellor, the Minister said the VC should consider regularisation of part-time employees who have been working for years without job security.

Mahesh also advised the VC  not to bow to the pressure exerted from groups who are  demanding of contract employees.

Former Vice-Chancellor Prof. S.N. Hegde in his address, expressed concern about politics entering academic activities of Universities. Noting that it is not easy for a Vice-Chancellor to become successful by overcoming the pulls and pressures, Prof. Hegde opined that the Government must ensure an interference – free atmosphere in the running of Universities.

Prof. G. Hemantha Kumar who spoke after receiving felicitation, said that he was carefully studying every aspect of University administration.

Stating that University is planning to make appointments to 300 vacant teaching and non-teaching posts, he sought support from the Government through grant of necessary funds.