Home » News » Wedding in the times of social distancing 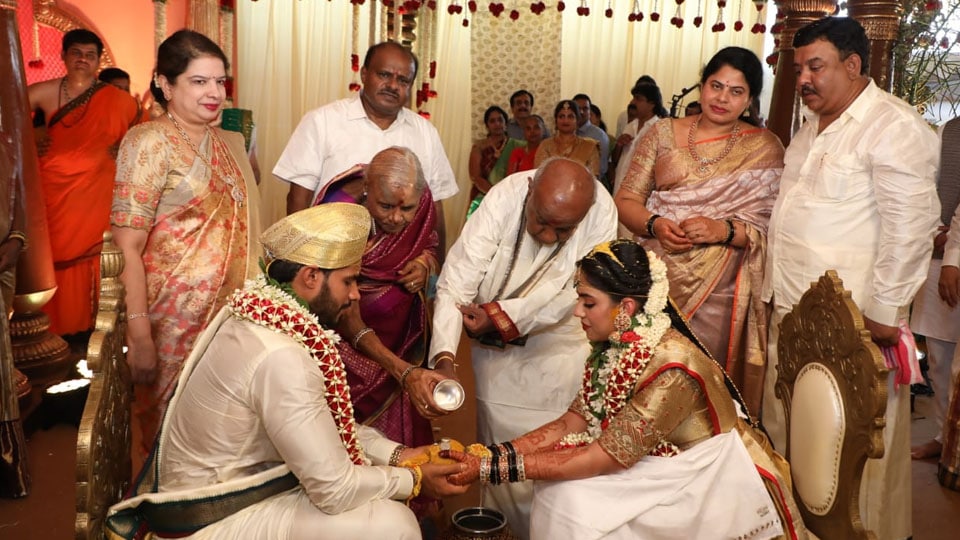 Wedding in the times of social distancing

Bengaluru: While many weddings and funerals have been be cancelled across the country due to the lockdown, political heavyweights of Karnataka, the Gowda family headed by former Prime Minister H.D. Deve Gowda, still managed to get their grandson married this morning at a farm house in Ramanagara.

Wedding photos showed no social distancing, masks or any precaution in the rituals. The media was banned from entering Ramanagara district while around 30-40 cars were seen headed towards the location from Bengaluru.

When asked, Police officials said the family had provided them with the registration numbers of the cars that had to be allowed. Any such mass movement and public gatherings, weddings that are attended by a large number of people have been banned by the government due to the lockdown and over the fear of the deadly coronavirus spreading.

Kumaraswamy had claimed “only around 60 to 70 people of the family” would attend the wedding. According to the Karnataka Police, passes for 42 vehicles and 120 people were given.

It was no big, fat wedding by any standards, it seemed in visuals from a drone, but everyone stood close together.

Nikhil, an actor-turned-politician, last came in the media glare when he contested the national election last year from his family stronghold Mandya and lost.

The families had earlier organised the wedding in Bengaluru. Despite the lockdown, Kumaraswamy refused to defer the big day but he did shift the venue. In a video message on Thursday, the JD(S) leader said the wedding had been moved from Bengaluru, a “red zone” for COVID-19, to Ramanagara, his assembly constituency.

He appealed to supporters to stay away from the venue, promising a bigger event when the situation returned to normal.

“It would be difficult to maintain social distancing if the event was organised at home. That’s the reason we are organising the event at our farmhouse in Bidadi. I request my workers and well-wishers to avoid attending the event,” Kumaraswamy said, adding that the decision to go ahead with the wedding was taken in consultation with doctors, including those in his family.

Action will be taken: Dy.CM

Karnataka Deputy Chief Minister Ashwath Narayan has said action will be taken against the former Chief Minister “without a second thought” if guidelines were not followed during the wedding.

“If this is the way we are handling the issue, it will send a very wrong message. I request my colleagues not to misuse position of power. We need to abide by rules otherwise it will send a wrong signal. Whoever is the violator, definitely we will take action. There were no instructions to police not to allow media. I will speak to (the police, district collector). They should not allow this kind of violation. We need to take action otherwise it will be a mockery of the system,” said Ashwath Narayan, pointing out that Kumaraswamy had been in public life too long to ignore government guidelines.