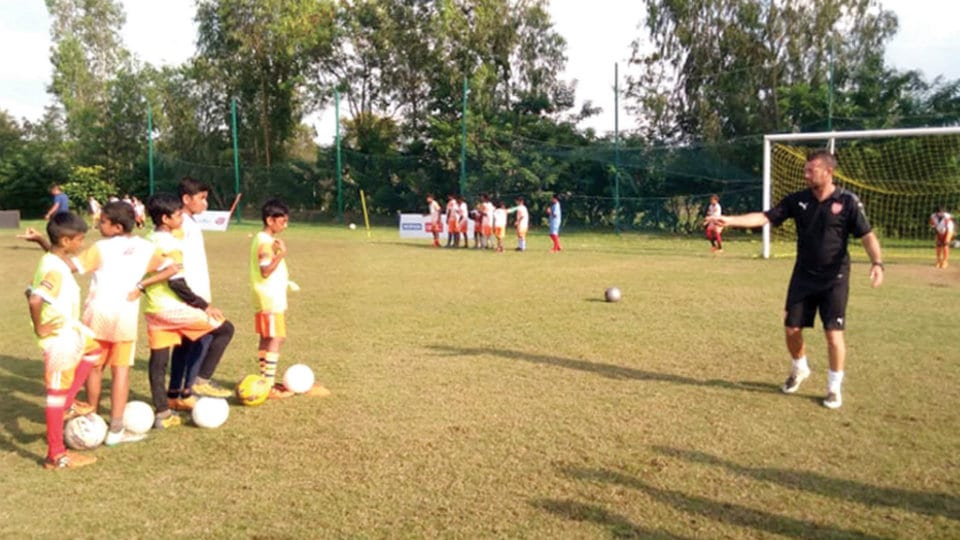 Kodagu is synonymous with hockey and the annual Kodava Hockey Festival is quite popular and a huge crowd-puller, providing a platform to budding players. In recent years, young sports enthusiasts from the district have also been showing interest in football too. As a result, many clubs have come up and have been organising tournaments to boost their interest in the game.

The INS (Ichettira Naren Subbaiah) Sports Centre at Kushalnagar that has now taken up the ambitious task of training young talents from the district, had recently organised a one-week coaching session with UK’s Arsenal football team coach and former England player Ian Selley.

Over 50 young football players from all over the district including Kushalnagar, Maragod, Suntikoppa, Murnad and Ammathi participated in the training session held at INS Centre at Guddehosur.

Even as the training session was conducted by Ian Selley, coaching classes too were provided free of cost to all students. INS Trustee Ponnappa said that Ian Selly’s remuneration and other expenses were incurred by the sponsors. The training, which was conducted up to 5 pm for six days, included special skill training and rules of the game.

British footballer Ian Selley is an ex-player of Arsenal Football Club and has served as the head coach at the Arsenal Soccer School, Dubai. Ian was the youngest player to make it to the Arsenal senior team that won the FA Cup (Football Association Challenge Cup) and UEFA Cup (Union of European Football Associations Cup). He had just turned 18 years when he made it to the senior team.

This was Ian Selley’s first visit to India. The idea of bringing him here opened up opportunities for European clubs and also has given an indication to the European scouts about the potential available here. His visit also opens up avenues of invitation into prestigious youth football tournaments in Europe and football scholarship programmes for talented kids.

The INS Sports Centre is also working on identifying and grooming those players to be sent to UK. Organisers hope that such coaching programmes open up new avenues for young footballers. The entire camp was sponsored by INS Sports Centre, in association with sponsors.

Youngsters, who attended the training, appreciated the coaching style and discipline of Ian Selley. Ian’s eyes welled up before he left after he witnessed his life-size image on the walls of INS Sports Centre displayed as a thanksgiving gesture. He promised to visit Kodagu again and help train footballers of this province as it holds a special place in his heart.

In memory of their late son

Naren, son of Ichettira Subbaiah, was a good footballer and his parents had many dreams about their son’s future. But their dreams were shattered as Naren was killed in an accident a few years ago.

To keep his memory alive, his parents decided to take up some meaningful project in their hometown and thus INS Sports Centre was born. Subbaiah, along with their other son, Ponnappa started shuttle badminton, cricket and football coaching at the INS Centre.

No difference between players: Ian Selley

Sharing his experience in Kodagu, Ian Selley said that there is no difference between Indian and foreign players. “Except for language barrier as a few students struggled to understand English, the training session was fruitful and all youngsters seemed to have learnt a lot,” he said. For April next year, Ian has invited five talented children to UK to participate in matches along with young European football counterparts.