Home » Columns » When the best among us falter 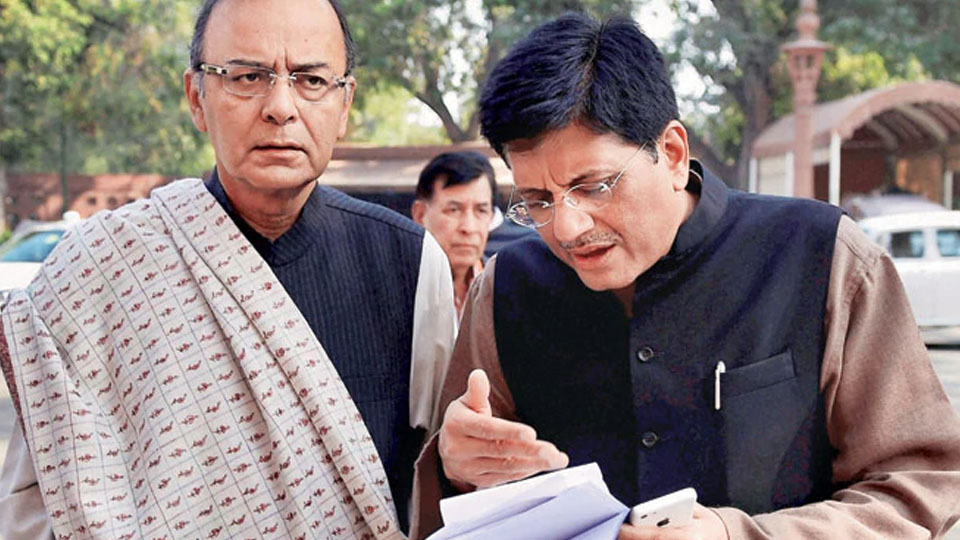 When the best among us falter

Arun Jaitley and Piyush Goyal are the two most qualified — shall we say civilised — men in the Narendra Modi Cabinet. Both have distinguished educational background and are recognised as well-informed intellectuals. Their public careers have been impeccable. They fit naturally into refined social circles and are respected for that. Under the influence of politics, however, even such mature minds sometimes get carried away — and that is disturbing.

Was it necessary for Arun Jaitley, for example, to go to the extent he did in comparing Indira Gandhi with Hitler? Indians need no new messiah to convince them about the tyranny of the Emergency, about the unacceptability of the dynastic system that Indira imposed on the country, about her bid to destroy the judiciary. The people are still punishing her for the evils that she did. This is clear from the Congress becoming a mere also-ran in virtually every State, and Rahul Gandhi, despite his best efforts, being unable to free himself of the dynastic tag.

A nation so unambiguous about Indira’s sins knows that she was like Hitler in some ways. But when a political oppositionist like Jaitley says that she imprisoned opponents as Hitler did, he must also accept that she did not kill minorities as Hitler did with the Jews — and as some in Jaitley’s own camp are advocating now. When BJP legislator Lal Singh threatened journalists with the fate of Shujaat Bukhari who was shot dead in Kashmir, he was not compared even to Pramod Muthalik, let alone Hitler.

It all boils down to intolerance of dissent. How Arun Jaitley, a campaigner for the right to dissent during his ABVP days, went to the other extreme as Minister is a topic historians must dissect. The change was evident when he became the principal strategist in the 2002 and 2007 Gujarat elections. It was Jaitley who stopped Vajpayee from exercising Raj Dharma in Gujarat following the 2002 riots. Jaitley was the first to propose Modi as BJP’s Prime Ministerial candidate in 2014. In the circumstances, Jaitley will probably be thinking that he has a special responsibility to defend the style and substance of the Government in which he is second only to the Prime Minister.

Given the heights he occupies, Arun Jaitley dislikes criticism. When BJP’s elder Statesman Yashwant Sinha criticised the Government, Jaitley called him a “job applicant at 80.” When his policies allowed no scope for peer review, specialist advisers such as Arvind Panagariya and Aravind Subramanyam quit. Even the Reserve Bank of India had to re-define autonomy to fit into the Finance Minister’s definition of it.

Irony peaked when Jaitley attacked Indira Gandhi’s suppression of dissent and said: “If you curb free speech and allow only propaganda, you become the first victim of propaganda.” How true even today! An institutionalised fear complex has curbed free speech and promoted propaganda under the current dispensation of which Arun Jaitley is a principal architect.

Piyush Goyal is a pillar of the same dispensation. To understand the enchanting human side of this accomplished gentleman, you only have to see/hear his keynote address at an event in his beloved alma mater, the Don Bosco School in Matunga, Bombay, in 2014. Recalling the discipline he learned and the values he developed under the stern but loving supervision of the Fathers in Don Bosco, Goyal went into sobs and tears as he said that “the heart and soul” he developed in school “will always be in my DNA.” He even recited the Lord’s Prayer. Such a cultivated liberal not only ended up in a camp where being liberal is equivalent to being anti-national, but also developed an ability to be ungraceful.

Referring to a coach factory project lying dormant in Kerala for 12 years, Goyal’s Ministry clarified that the plan was virtually abandoned as existing coach factories were enough to meet the requirements of the Railways. The Minister could have left it at that. But he added brashly that “Railway tracks cannot be built on air.” This, after the State government had acquired 439 acres of land six years ago. The comment was out of character. We must infer that both Arun Jaitley and Piyush Goyal have become victims of power and of the consequent assumption that the government of which they are a part is the best thing that has ever happened, or can happen, to India. That conviction makes them feel contemptuous of those who think differently. Why does that remind us of Sadhvi Niranjan Jyoti and Sakshi Maharaj?