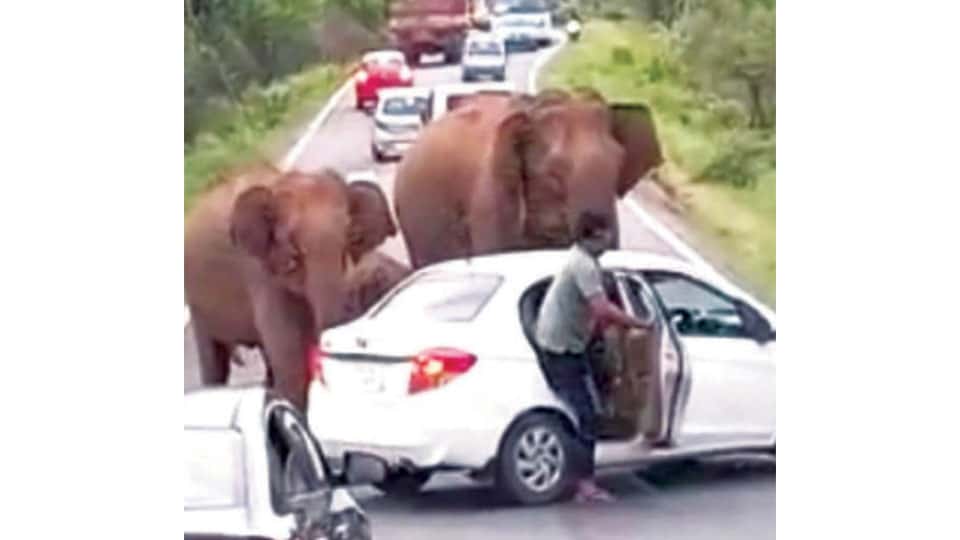 Chamarajanagar: Three wild elephants,  including a calf, which were walking on the road, attacked a car near Hasanur on the National Highway connecting Chamarajanagar with Sathyamangala in Tamil Nadu on Friday.

Luckily, no one was injured in the incident. The video of the elephants attacking the car has gone viral on social media.

On Friday afternoon, two wild elephants were walking on the busy road with a baby elephant which resulted in vehicles including trucks and cars stopping on the side of the road to let the elephants pass.

As too many vehicles had lined up on one side of the road, the elephants walked past the vehicles on the other side of the road. Meanwhile, the driver of a car, shocked on seeing the elephants coming, attempted to take a U turn and the enraged elephants blocked the car and broke a side mirror. An occupant of the car, who was sitting on the rear seat, fearing for his life, opened the door of the car, got down and fled from the spot.

Later, the two wild elephants and the baby, went inside the forest area and the whole incident has been captured on a mobile phone camera which has gone viral. As movement of vehicles is banned in Sathyamangala Tiger Reserve Forest, the density of vehicles is more in this region during daytime.

Elephants tend to attack vehicles when they are with their babies to protect them. This is a clear signal to stay away from the baby. Elephants are known for their gentle nature, but they can become aggressive when they feel harassed, vulnerable or threatened.