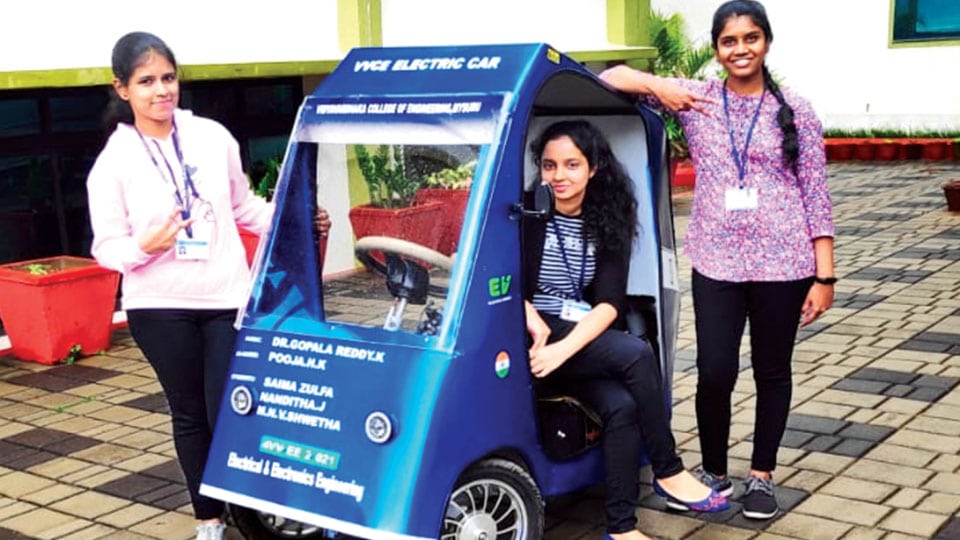 Every crisis is an opportunity in disguise. While the entire education system was grappling with the real world of challenges during COVID outbreak, three students from Vidyavardhaka College of Engineering (VVCE) developed an Electric Vehicle (EV) from scratch and the car is there for everyone to see.

Picking machines over books and ideas over words, the students have proved that a young mind is the sharpest mind — learns quickly and acts quicker. The car that they have built can be improvised and also expanded to a full-fledged EV, a crucial aspect to protect the world that largely used fossil-based fuels.

M.N.V. Shwetha, Saima Zulfa and J. Nanditha, all final year students of Electrical Engineering and Electronics Department, spent over eight months to build this car and have built it from the ground up by using a 12v, 32Amp lead acid battery and a 1KW motor.

The car can give a mileage of up to 70 kms for one full charge and it consumes only one unit of electricity for full charge. This will cost Rs. 7 for 70 kms whereas a normal car requires three to four litres of fuel to run up to the same distance and the cost will be about Rs. 400.

The operation of this single-seater car is noiseless and with zero emissions, it is an eco-friendly car. It is a low-cost vehicle with easy parking and having leg brakes. Any layman can ride the car and it is easy to ride on a narrow road.

Speaking to Star of Mysore over phone, Shwetha and Saima said that they had done many projects in the past including software-based ones, fire alarm, sensors-related home automation and appliances and also IoT (Internet of Things) projects and this time they wanted to do a hardware-based project.

“We brainstormed and this car idea cropped up and we wanted to make it a green initiative — to build clean energy vehicles. Rising fuel costs, carbon footprint and pollution were our main concerns. An EV was the first choice and that was trendy too,” they said.

More features can be added

The beauty of the car is such that it can be expanded. “We are doing research and have almost finalised to make it much more efficient and advanced by adding features like voice and app-based controllers (fully automatic) and also placing solar panels for natural power and also improving the overall design,” they added.

The EVs built by reputed companies are expensive and cannot be afforded by all. “We have built this three-wheeled EV with Rs. 60,000 and that is where we have our edge. The car is with our department now and both students and faculty can use it and this is something we have given our department. Further improvisation can be done by the next batch of students,” they explained.

The trio worked on the car for over eight months at a workshop at Bogadi on Gaddige Road and they were assisted till an extent by some of their friends in the Mechanical Engineering Department and also by Maheshwar, a student of their project guide, to fabricate, bend and weld the metal frames required for the car.

“It was my childhood dream to drive and own a car and this motivated me. Bending metal sheets, cutting and welding rods were beyond my imagination and I did not imagine that I would do all this,” said Shwetha.

This initiative was led by Saima who said, “My father is an electrical engineer and I got motivated to choose electrical branch.” Saima has now been hired by Cognizant

Technologies. In future, the team has plans to use   lithium ion batteries and to increase seating capacity.

VVCE Principal Dr. B. Sadashivegowda said that the college was proud of the innovators. “They have used one wheel at the back and two wheels at the front which is first-of-its kind in the design of three-wheelers. There are many features which also can be improved in the future models and make it commercially viable,” he said.

Project guide Prof. K. Gopala Reddy said that he had been an NSS Officer from the past 18 years and has adopted five villages. “Our vehicles emit a lot of carbon dioxide making it hard to get pure oxygen. The innovation by our students is a stellar achievement,” he noted.