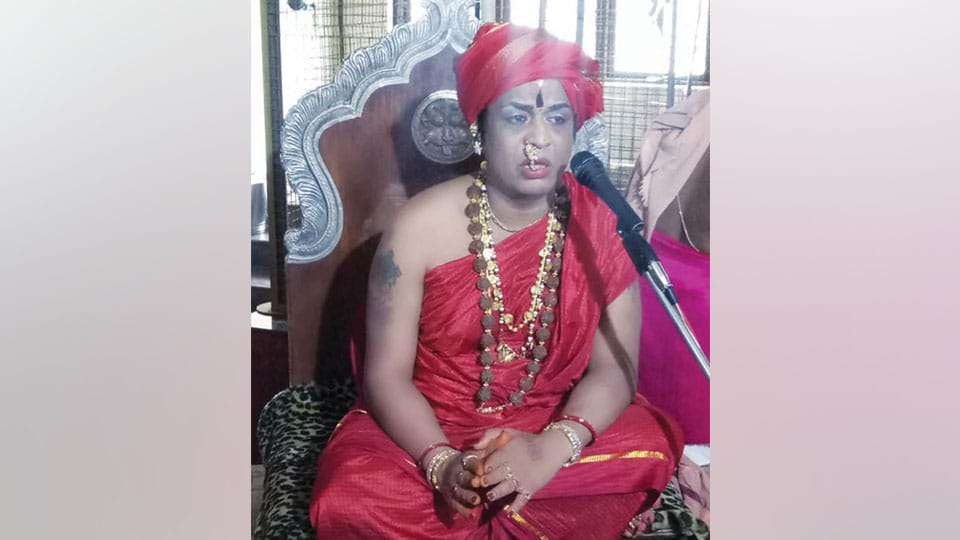 Mysuru:  A woman from city has filed a Police complaint accusing Sri Vidyahamsa Bharathi Swamiji of sexual harassment, kidnap and assault. An FIR (Number 0135/2018) has been registered on Sept.7 at Kuvempunagar Police Station. The woman has also accused her husband of encouraging the Seer to sexually exploit her.

Sri Vidyahamsa Bharathi Swamiji of Thridhama Kshetra at Pandavapura is in city for Chaturmasya Vratha that will conclude on Sept.24 at Srirama Mandira in Krishnamurthypuram. Every day, he holds spiritual sessions for hundreds of devotees at Srirama Mandira. He has a huge fan following as devotees believe that the Seer has powers to solve all their financial and family problems.

In her complaint (a copy of which is with Star of Mysore), the woman, a resident of Ramakrishnanagar (coming under Kuvempunagar Police limits), has stated that her husband had forced her to go to the Seer and seek his blessings. Based on the complaint given by the woman, the Police have named her husband as Accused Number 1 and Vidyahamsa Bharathi Swamiji as Accused Number 2.

The woman has stated in her complaint that she married her husband 15 years ago and he had asked her to meet the Seer at Srirama Mandira. “My husband told me that he knew Vidyahamsa Bharathi Swamiji well and if I listen to him, all our problems including huge loans, will be solved. I refused to meet the Seer. On Sept. 4 at 1 am, the Swamiji rang the door bell of my house and I opened it thinking that it was my husband,” the woman has stated.

Explaining the turn of events on that night, the woman said that the Swamiji, along with his five followers and her husband, barged into the house and assaulted her. “I was badly beaten up by the Swamiji and he assaulted me all over the body including my private parts. He abused me in filthy language for refusing to meet him at the temple,” she narrated.

The woman further said that the Swamiji then took her to the bedroom and sexually harassed her. “The Swamiji told me that he has many spiritual powers and he repeatedly assaulted me,” she said. The Swamiji also set her clothes on fire and behaved in an inhuman way, she said. “He even attempted to kill me,” she has stated in her complaint.

Later, the woman narrated that the Swamiji forcibly took her away from her house and made to sit in a big vehicle (KA-51-MF-256) and was taken to her husband’s brother’s place in Kuvempunagar.

“The Swamiji forced me to sit on his lap inside the vehicle and threatened me that he would kill me if I did not come to meet him in three days,” she has stated in the complaint.

Speaking to Star of Mysore about the case, City Police Commissioner Dr. A Subramanyeswara Rao said that the Kuvempunagar Police will investigate the case impartially and without bowing to any pressure. “It was at my instance that the FIR was registered and we will take the case to its logical end,” he said.

sexual harassment Sri Vidyahamsa Bharathi Swamiji
Volunteers lend a helping hand to displaced animals in Kodagu
Finally, they can say they are Gay