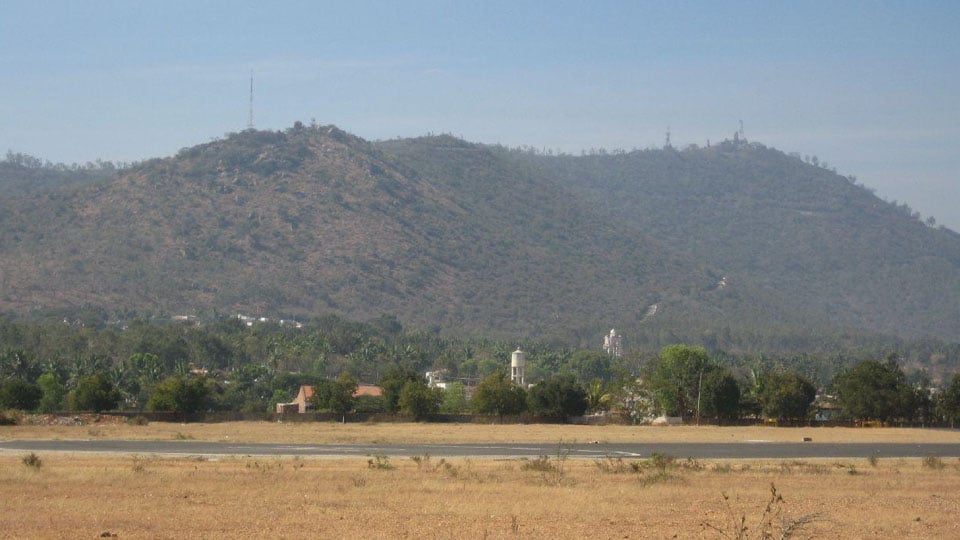 S. Meenakshi claims ownership over 7 acres of land in ‘A’ and ‘C’ Blocks of Kurubarahalli Survey No.4 in Kasaba Hobli

Mysuru:  A woman, claiming to be the owner of the land adjacent to Lalitha Mahal Helipad, has lodged a complaint with Alanahalli Police accusing a furniture shop owner of erecting pendals on her land, in violation of a High Court order.

In her complaint, Meenakshi has accused the owner of Shariff Furniture Shop of illegally erecting pendals on her land. Maintaining that the 7-acre land belongs to her and the High Court has stayed the DC’s May 2015 order on ‘B-Kharab’ classification in respect of her land, Meenakshi said that this matter was brought to the notice of the District Minister, Tourism Minister, DC, the City Police Commissioner, PWD and MCC authorities.

But Shariff Furniture Shop erected pendals on her land in violation of the HC’s order and when questioned, the furniture shop owner rebuked her saying that what he had done was as per the directions of the Government, the complaint said.

Accusing the shop owner of erecting pendals at the behest of some officials, in violation of the HC order, Meenakshi has asked the Police to initiate legal action against encroachment and take measures for removing the illegally erected pendals.

It may be mentioned here that one K. Manu, calling himself as the GPA holder of S. Meenakshi, who claims that the 7 acres of land is owned by her, had erected a public notice board on the land, mentioning that it was a private property and no trespassing was allowed.

The notice board was put up to oppose the move of the district authorities to organise Dasara events on this vacant land. Star of Mysore had carried a report in this regard on Sept.26.

‘Don’t use my land for Dasara’

S. Meenakshi, who has claimed ownership over seven acres of land in ‘A’ and ‘C’ Blocks of Kurubarahalli Survey No.4 in Kasaba hobli, has appealed to the authorities not to use her land for any Dasara-related activities.

“Nobody has the right to use my private property for any Dasara activities. If they have to use, they must take prior permission from me and pay a suitable compensation,” she has said. If the land is used in an unauthorised way, she will be forced to initiate legal proceedings against them, Meenakshi has warned.