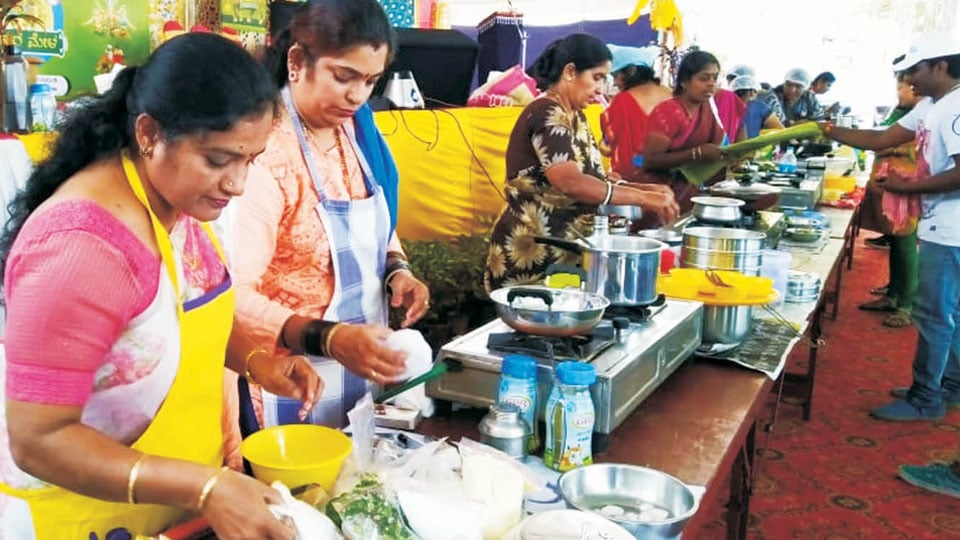 The task set was to prepare Kayi Holige, Vegetable Pakoda and Rice Pulao, all in just 90 minutes. The winning-team was decided on taste of the food, cleanliness and presentation of the item along with time factor.

Totally seven teams with two to three members in each participated in the event. The jury was led by Dr. Chidambara, District Vector-born disease Control Officer.

The first prize was won by the Jain Milan Main team from Bogadi in city comprising Roopa Nagaraj, Padmini Padmaraj and Srimathi Amalaprabhu.

The second prize went to Spoorthi Shenoy and M. Latha of Anugraha Sthree Shakti Sangha of Hebbal 2nd Stage here. The third prize was won by Puspalatha and Sowmya of Karnataka Rajya Mahila Shakti Sangha, Bengaluru. Interestingly, the two women had come from Bengaluru as tourists for Dasara and were staying at Gokulam here. On learning that a cooking contest had been organised, Pushalatha and Ramya were said to have hurriedly purchased the necessary items and participated in the contest with confidence and firm determination to win a prize and were successful to make it to the third position.

Dr. Chidambara presented the prizes to the winners. All the participants were given certificates.

Food Inspector Anasuya and others were present.

Speaking to Star of Mysore Roopa Nagaraj said that she was very happy to get the first prize with good co-operation from her partners. She added that they prepared the assigned food items with confidence and staying cool all the time which paid off.