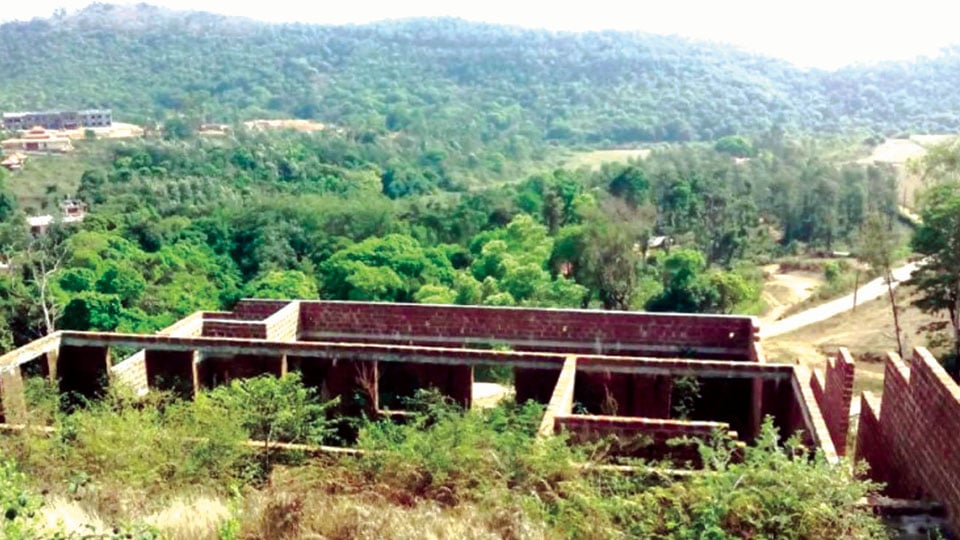 Works on Kodava Heritage Centre to be completed in 10 months, says Minister

Bengaluru: Tourism Minister C.T. Ravi said that the works on ‘Kodava Heritage Centre’ at Vidyanagar near Madikeri, the district headquarters of Kodagu, will be completed in ten months. The project was envisaged by the Government in 2004-05 for introducing the unique Ainmane tradition of Kodavas with a museum.

The Kodava Heritage Centre Project features an Ainmane, a Hall, a small indoor water pond, an open auditorium, a library, a museum and drinking water facility. The Project is coming up on a 4-acre land at Karavale Badaga village close to Vidyanagar on the outskirts of Madikeri City, near Mahindra Holiday Resort.

Replying to a question by Congress MLC Veena Achaiah in the Legislative Council yesterday on why the project was lying in limbo for long, Ravi assured that all the works on the Heritage Centre will be completed in ten months. Attributing the delay to the lethargic attitude of implementing agencies, change in structure design and multiple revision of estimate, Ravi said that part of the works have been completed and the rest will be completed at a cost of Rs.97 lakh. The contractor has been asked to finish the works in ten months, he added.

Continuing, Ravi said that the Union Tourism Ministry sanctioned Kodava Heritage Centre in 2004-05, with the project estimated to cost Rs. 88.75 lakh then, following which Rs. 33.54 lakh was released to Jungle Lodges and Resorts, the implementing agency. But the project did not take off and subsequently it was decided to execute the works through the district administration at a cost of Rs.1.45 crore. After administrative approval on Aug.18, 2010, the contract was awarded  on Sept.12, 2010 to M.B. Hemashankar of Mysuru, who was asked to finish the works in a year, the Minister said.

Though the project took off, only the walls of the structure came up, amid complaints of poor quality work and improper planning and architecture.

Ravi said that due to doubts about the stability of the structure’s foundation, the Government was sought a redesign of the project  in 2011. On account of the changed design, the project estimate was revised to Rs.2.68 crore, which was approved by the Government on April 26, 2012. The contractor who resumed the works based on the revised estimate went slow, following which the contractor was served notice a number of times asking him to expedite the project. But as the works were not finished, the contract was terminated on Nov.27, 2018. By the time the contract was terminated, the contractor who was paid Rs.1.68 crore by then, had partially constructed the retaining wall and  tiled-roof (Mangaluru tiles). Later, the PWD Chief Engineer  submitted a revised estimate of Rs. 3,30,45,110, which received administrative approval on May 27, 2020. The PWD has now been directed to complete the works in ten months, Ravi explained.

The  cost of the Project which was first planned in 2004-05  has gone up from Rs. 88.75 lakh to Rs.3.30 crore in the 15-year period and the people of Kodagu are hoping that the Project will be wholly executed soon and the Heritage Centre becomes a major tourist attraction.

It may be mentioned here that Kodagu Deputy Commissioner Annies  Kanmani Joy, who is also the District Tourism Development Committee Chairperson, surprised and upset over the undue delay in the execution of the project, held a meeting on Sept. 6, 2020, during which she ordered the officials to expedite the project.

Later Tourism Minister C.T. Ravi held a meeting with officials on  Sept.11, when the Minister was shocked to learn that an important tourism project like Kodava Heritage Centre was lying in limbo for the past several years.