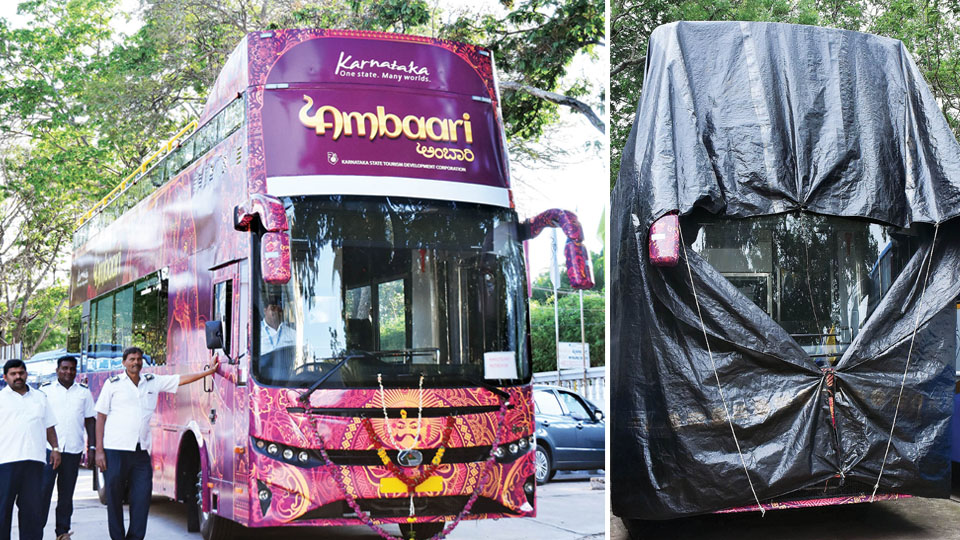 Mysore/Mysuru: ‘Ambaari’ Double Decker Dasara bus ride on designated routes to cover prominent tourist spots within the city will have to wait for some more time. Reason: The LED serial lights installed across the roads are low in height than the tall ‘Ambaari’ bus.

‘Ambaari’ is a Hop-on and Hop-off initiative for tourists to experience the magnificent City of Palaces and other Heritage structures. It is a specially-built bus for open-roof tours, with a seating capacity of 40.

The bus, an initiative of State-run KSTDC (Karnataka State Tourism Development Corporation) was launched as a tourist attraction. But the Double Decker bus parked in KSTDC premises on JLB road is under wraps as of today to prevent dust accumulation and also rain water.

KSTDC Regional Manager Uday Kumar, speaking to Star of Mysore this morning said the bus is 20 ft. tall and LED serial lights installed across roads is low in height than the bus. If a person stands on open top bus, the height goes to 25 ft, he added.

Pointing out that the CESC has to install the serial lights above 25 ft. for the Double Decker bus to move on city roads freely, he said that though the bus could move on certain roads as of now, it cannot be taken out of KSTDC Office itself as the lights installed near the Office is very low in height.

Uday Kumar further said that the CESC is increasing the height now and added that the dates for the Double Decker bus ride is yet to be decided, most probably after Vijayadashami.

Pruning of tree branches: It may be recalled, following a request by KSTDC, the MCC and Forest Department authorities had undertaken pruning of tree branches on all roads that the ‘Ambaari’ bus had been identified to travel much ahead of Dasara-2020. The CESC was also requested to remove its overhead power lines for facilitating smooth movement of the Double Decker bus.

The ‘Ambaari’ bus journey was scheduled to commence from KSTDC premises (Hotel Mayura) on JLB road on every trip covering 14 important tourist destinations including Mysore Palace, Jaganmohan Palace, Open Air Theatre, Manasagangothri, Mysuru Zoo, Karanji Lake, Crawford Hall, CFTRI and St. Philomena’s Church, among others. The date of launch, the timings and the ticket price for ‘Ambaari’ bus ride was to be finalised.

The duration of each trip was to be one-and-a-half-hours, with intermittent stops in between.

CCTVs were also installed inside the bus for the safety of the passengers.

The 40-seater bus with lower and upper-decks was built by Bengaluru-based KMS Coach Builders after KSTDC approved the tender last year.

One bus had arrived in Mysuru in March just a few days before the Nation-wide lockdown was announced and also made its first run on a trial basis.

Three more buses were to be introduced later depending on the response but the CESC seems to be a stumbling block for the royal bus ride this Dasara festive season.