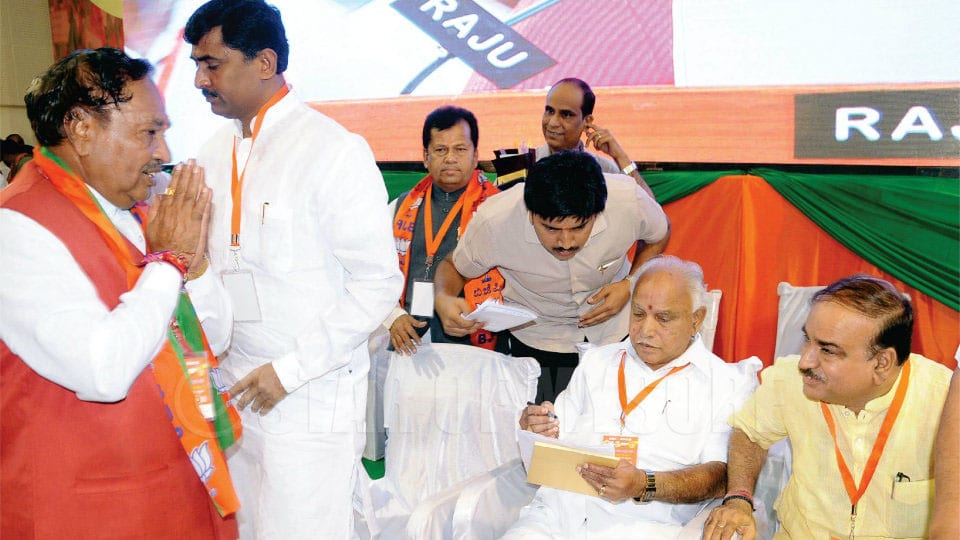 The State Executive meeting began at around 11 am and Yeddyurappa and Union Minister H.N. Ananthkumar and other leaders were sitting on the dais. At this point, Eshwarappa walked on the dais and greeted Yeddyurappa with folded hands. While Ananthkumar, who was seated next to Yeddyurappa, got up from his seat to greet Eshwarappa, Yeddyurappa did not even exchange glances with his bête noire. He was busy reading a book.

After a few moments, Eshwarappa walked away from Yeddyurappa and sat beside Ananthkumar. This incident happened in the full view of those on the dais and the delegates, though Yeddyurappa had said yesterday that the party was united. “The rift in the party between me and Eshwarappa in connection with the Sangolli Rayanna Brigade has been resolved,” he had told reporters.

At the meeting, RSS functionary and its South-India Co-ordinating Secretary, B.L. Santhosh was conspicuous by his absence. It may be recalled here that Yeddyurappa had some time back blamed Santhosh for abetting rebellion within the BJP. Yeddyurappa had alleged that Santhosh had picked up Eshwarappa to continue his proxy war against him  (Yeddyurappa).

This morning, before the BJP Executive began, party workers were seen removing the posters and banners that had Santhosh’s name from the venue. They were later dumped behind the Rajendra Kalamandira.

‘ESHWARAPPA WAS FORCED TO ATTEND’

Party sources said that Eshwarappa was forced to attend the meeting as he was pushed to the corner with the party not even naming him on the list of speakers.

In Bengaluru yesterday, Eshwarappa said that he will be attending the meeting on both the days, putting an end to speculation that he and his supporters will be skipping the event. “We are loyal party workers. How can we stay away from the State Executive Committee meeting?” he questioned.

Eshwarappa was scheduled to participate in a workshop for the members of the Sangolli Rayanna Brigade in Raichur on May 8. Eshwarappa said that the Brigade event has been postponed and the new dates for the workshop will be announced soon.