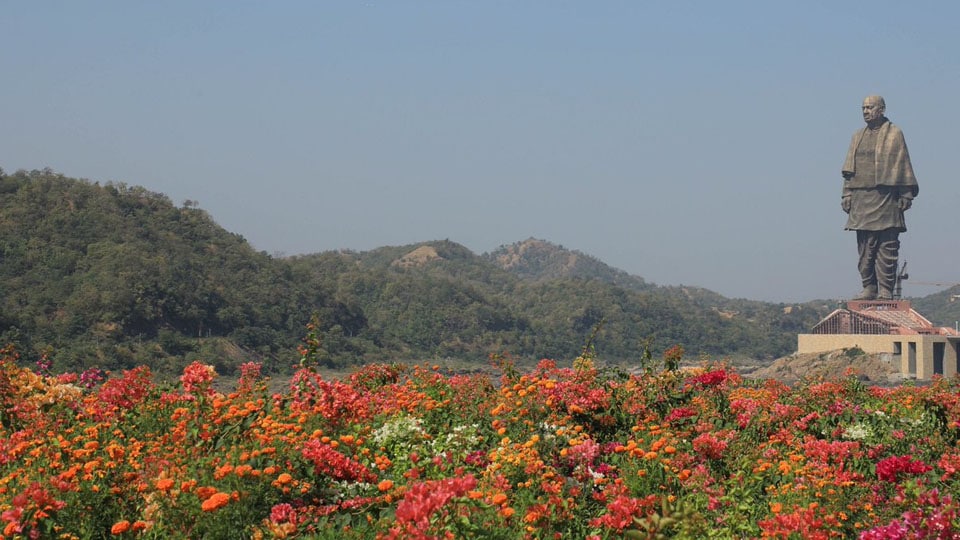 New Delhi:  Prime Minister Narendra Modi will dedicate the Statue of Unity, the world’s tallest statue built in Gujarat, to the country on the birth anniversary of Sardar Vallabhbhai Patel on Oct. 31 (31.10.1875 – 15.12.1950).

It may be recalled here that iron was collected from all over the country for the construction of the 182-meters-tall Statue of Unity, a tribute to the Iron Man of India, which saw contributions from every village in its making.

This ‘Statue of Unity’ has been built in a record 42 months’ time by the engineering and infrastructure major L&T on river Narmada in South Gujarat. The Rs. 3,000 crore project is funded for the most part by the Gujarat government, with minor contributions from the Centre and Central PSUs. The Statue of Unity, which is twice the size of the Statue of Liberty, has been built in a remote corner of Gujarat as a flagship project of Modi, who is to open it tomorrow. The statue is made up of 1,700 tonnes of bronze, 1,850 tonnes of bronze cladding, 70,000 metric tonnes of cement and 24,500 metric tonnes of steel.

Two high speed elevators inside can take tourists up to the statue’s chest from where around 200 visitors can view the Narmada River and Sardar Sarovar Dam over it.

Standing tall at Sadhu Bet Island on the Narmada River in Gujarat, the Statue of Unity is designed to withstand winds, vibrations and earthquake. As many as 3,400 workers and 250 engineers worked round-the-clock for 42 months to make the dream project of PM Modi a reality.

It is said that Surya Kiran of the IAF will perform aerobatics in the sky over Patel’s statue while spreading the colours of Tricolour in the sky. At the same time, a team of Jaguar fighter aircraft will fly over the statue and a team of MI-17 choppers will shower rose petals. Also, folk dance performances from Punjab, Assam, Mizoram and Gujarat have been planned when PM Modi will dedicate the 182-metre tall statue at Kevadia Colony to the country.

The Prime Minister will reach Ahmedabad today evening and stay overnight at Raj Bhavan. He will leave for Kevadia Colony in a special chopper tomorrow morning. The PM is expected to return to Delhi immediately after the event. Reports said that PM Modi will be welcomed by the bands of the Armed Forces, Gujarat Police, SRP, CRPF and BSF, and cultural troupes from 29 States and two Union Territories. He is also likely to address a public gathering.

Protest: Meanwhile, the headmen of 22 villages situated near the Sardar Sarovar Dam yesterday wrote an open letter to Prime Minister Narendra Modi stating that the villagers would not welcome him at the inauguration of the Statue, dubbed an ‘engineering marvel’ by makers Larsen & Toubro.  Local tribal leaders have also announced a boycott of the function citing destruction of natural resources due to the Memorial.

8 COMMENTS ON THIS POST To “143rd Birth Anniversary of Sardar Vallabhbhai Patel: PM Modi to dedicate world’s tallest ‘Statue of Unity’ to the country tomorrow”