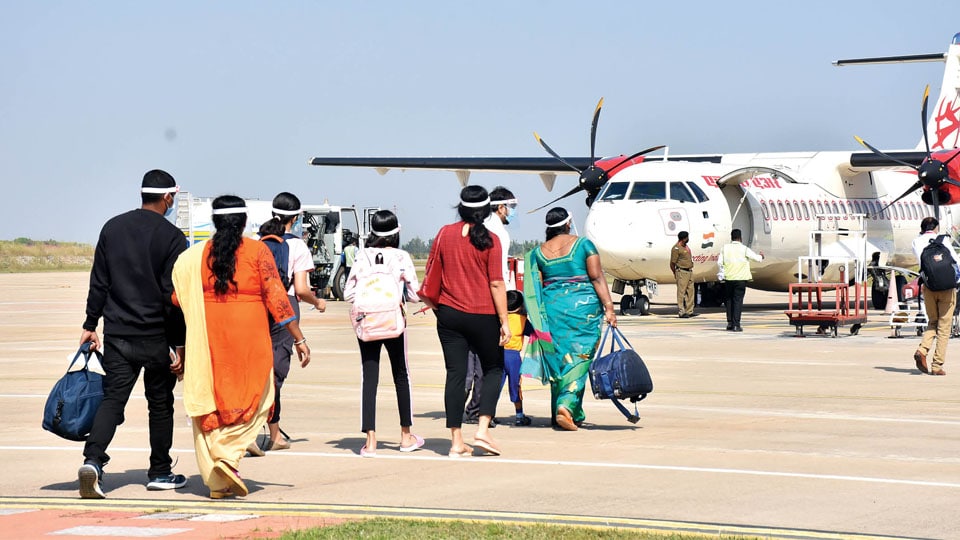 Mysore/Mysuru: After a gap of two years, the Mysore Airport at Mandakalli is seeing a flurry of activities with full occupancy in all the flights. The first and second wave of COVID-19 had dealt a severe blow to the airline operations and the future was bleak where industry experts predicted that it would take at least one year for operations to pick up.

But belying predictions, the flight sector looked up early and a large number of tourist arrival to Mysuru has substantiated the same. Tourists are landing in Mysuru in direct flights from destinations and as a result, the demand for flights to places like Goa, Hyderabad and Chennai has substantially increased.

There is a demand for additional flights as customers are preferring flights to trains and buses where journeys are tiresome and would take long hours, Airport Director R. Manjunath told Star of Mysore. Every day, 12 planes take off and land and talks are on with more airlines to commence operations from Mysuru, he added.

Mysuru has flight connections to Bengaluru, Chennai, Hyderabad, Kochi and Goa and the passenger footfalls have reached the pre-pandemic levels.

“March 2022 recorded 14,600 people taking flights to and fro Mysuru and April too is encouraging and all the flights to Goa, Bengaluru, Chennai and Hyderabad are seeing 100 percent occupancy. We are not worried any more about occupancy rates now unlike during initial stages. Now notably, there is 100 percent occupancy rate even if some of the routes are not subsidised under the Centre’s Regional Connectivity Scheme UDAN (Ude Deshka Aam Naagrik),” he said.

The Airport authorities are keen on getting operators to other potential routes. “There is a huge demand for flights to Shirdi and Mangaluru and Belagavi. Also, stakeholders from the trade, industry and commerce sectors are seeking flights to Coimbatore and Pune. We are in talks with Star Airways for flights to Belagavi and Mangaluru,” he added.

At present, only ATR-72 type planes can land at Mysore Airport. Additional flights, more destinations will be a reality after the present Airport runway of 1,740 metres is expanded to 2,750 metres for which the State Government has released Rs. 319.13 crore to acquire land.

From May 3, IndiGo will operate flight services to Hubballi. IndiGo will initially operate on the Mysuru-Hubballi sector thrice a week and will increase the schedule depending on the passenger response.

8 COMMENTS ON THIS POST To “14,600 travellers utilise Mysore Airport in March”