Home » Coronavirus Update » 15 Bengaluru returnees denied entry to village in Mysuru; made to stand on road 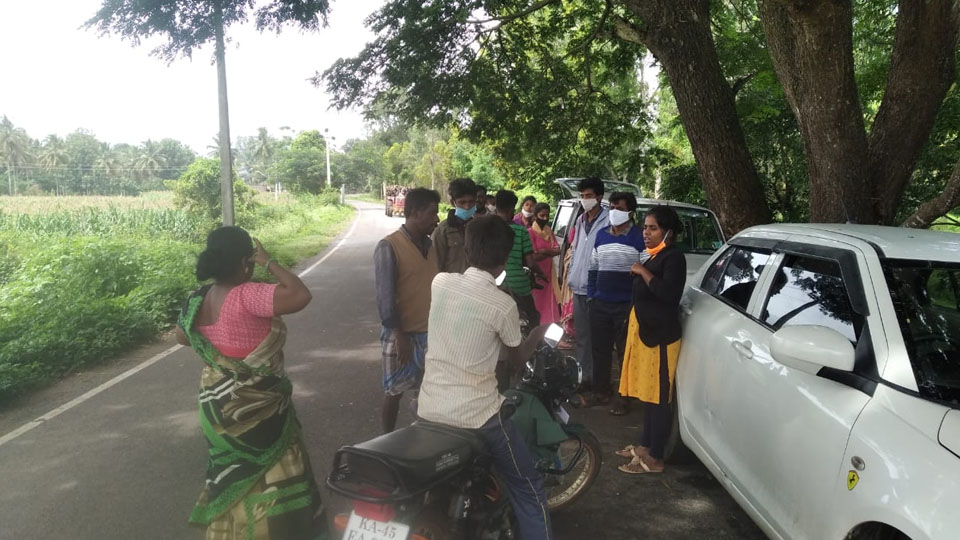 15 Bengaluru returnees denied entry to village in Mysuru; made to stand on road

Hanagodu: At a time when many people who had migrated years ago to cities like Bengaluru in search of jobs are returning to their native villages due to COVID-19 scare, here is an incident where a group of people who returned from Bengaluru were prevented from entering a village by alert villagers this morning.

They were told either to return to Bengaluru or get COVID-free certificate from an authorised laboratory. Despite plea from the returnees, the villagers did not budge and told them that they are not ready to take the risk as there is an explosion of Coronavirus cases in Bengaluru.

The incident occurred at Abbooru village in Hunsur and the village borders Hanagod where the villagers blocked the entry of people due to virus scare. Some 25 to 30 villagers had left Abbooru years back in search of livelihood and better prospects.

When the nationwide lockdown was announced in March, most of the villagers who had settled in Bengaluru came back and were planning not to return. Instead, they chose farming. But when the lockdown was lifted, they again went back to Bengaluru. The village elders, however, advised them not to leave the village as during June-July the virus cases are likely to spike.

The elders’ advice was, however, not heeded to and the group left to Bengaluru. As COVID has reached epidemic proportions in Bengaluru and there is a severe shortage of beds, hospitals and care facilities, the same group – comprising 15 persons — returned to Abbooru and reached the village border at 5 am today.

Getting a whiff of their arrival, villagers rushed to the border and blocked their entry. The group was told to either return to Bengaluru or get a COVID-free certificate from an authorised laboratory. Many pleas from the returnees fell on deaf ears. The villagers told them that if entry is allowed, the lives of other villagers including women and children will be at risk.

The group stood on the road along with their vehicles and even the villagers of Hanagodu denied them entry for the same reason. The Police and the health officials were informed and the group was told that they have to remain in home quarantine for seven days. The returnees agreed to this and two houses in Abbooru were vacated for the 15 of them to stay.

They will remain in home quarantine for seven days and their neighbouring houses have been asked by Health Department officials to ensure supply of essential commodities.

Meanwhile, one person from Bharathavaadi village bear Abbooru tested positive for the virus today. The Police and Tahsildar have sealed the area of the village where the person’s house is located.

12 COMMENTS ON THIS POST To “15 Bengaluru returnees denied entry to village in Mysuru; made to stand on road”