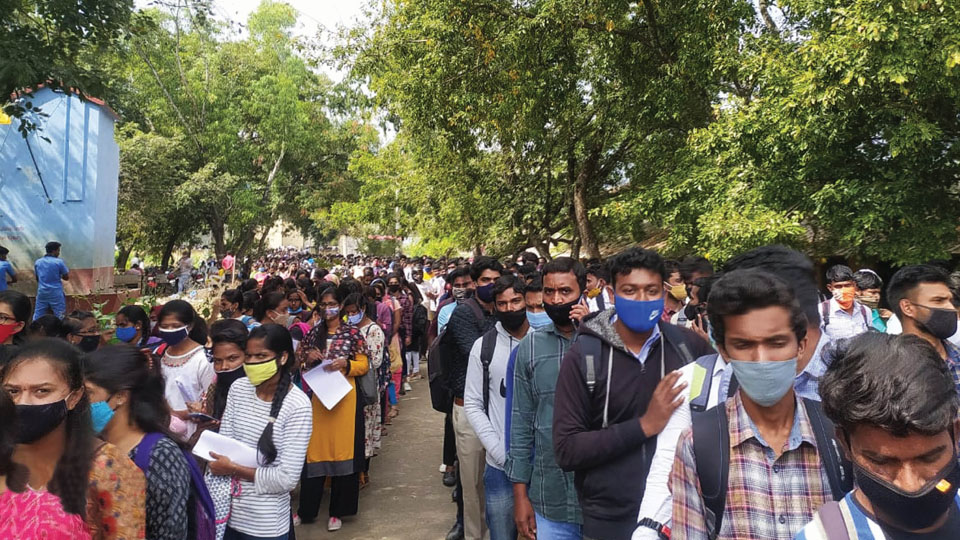 3,300 candidates attend Udyoga Mela, 609 get job letters on the spot

Mysore/Mysuru: Stating that students should seriously think about their career in college days itself, Maharaja Government PU College Principal T.R. Siddaraju said that parents should encourage their wards to start preparations for competitive exams early.

He was speaking after inaugurating the ‘Udyoga Mela’ organised by the Department of Industrial Training and Employment, under the Union Government’s ‘Rashtriya Vrutti Seva Yojana’ at Government ITI College premises in N.R. Mohalla (Mysuru-Bengaluru Road) here recently.

Noting that students should not compare themselves with their peers, Siddaraju said that likewise, parents too should not make a comparison of their wards with others in terms of work and studies. Opining that merely scoring high marks would not do in these days of cut throat competition, he said that it is important to qualify in competitive exams for shaping a career. Pointing out that students should understand that economical constraints do not come in their way of achieving success, he said that it is important to note that poor students have a great zeal  for learning.

Maintaining that job would not beckon us in this highly competitive world, he said that it is the other way around, with candidates having to chase jobs. He wished that such Udyoga Melas become a successful platform for large-scale employment.