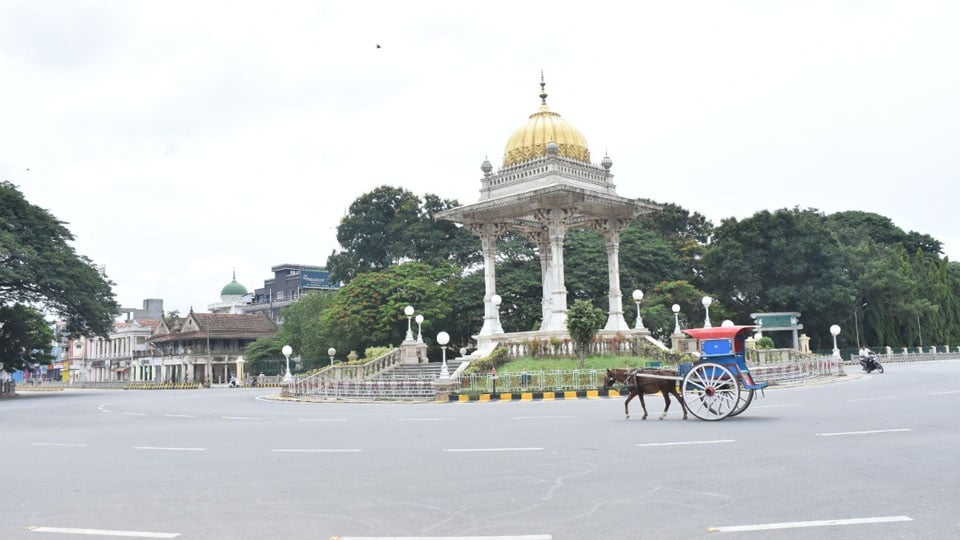 Mysore/Mysuru: Mysuru was brought under a 35-hour curfew from 6 pm on Saturday to 5 am on Monday in an attempt to curb the spread of Coronavirus. The response to the Government’s order was overwhelming in Mysuru where the entire city was shut. Only the essential services functioned.

City Police had issued a strict warning against those who come out of their homes and violate the curfew. They had urged residents of the city to “stay at home and break the chain.”

The curfew that began today will continue every week till August 2. Essential services were open. Grocery stores, Kirana shops, newspaper delivery and restaurants were open only for home delivery. Bars and pubs were closed, theatres, shopping malls and other commercial establishments apart from essential services will remain shut during the curfew.

Chief Minister B.S. Yediyurappa has instructed each and every Department to be very strict and implement the guidelines without any fear or favour. He has also appealed to the public to follow the guidelines and remain inside their houses to give room for Coronavirus to attack.

Transport service in Mysuru was off the roads and KSRTC city and rural had announced that they will not operate their buses. Even private service of auto-rickshaw, Ola, Uber, private buses did not run. Only medical shops, milk booths were open and hotels remained open only for parcel service.

Though there was permission for essential services to operate, many restaurant and grocery store voluntarily shut their shops during the curfew. Streets were empty and there was only occasional movement of vehicles. While residents chose to remain indoors and order food online, app-based delivery partners operated their vehicles across the city.

“People should stay at home and even avoid going to the grocery stores. They can stock up on Saturday. We are imposing this curfew for their own good and people should cooperate,” the Police had said.

Police personnel were deployed at every major junction and main road, just like Lockdown 1.0 in March and April. Even people who came out for emergencies like going to the hospital, they were asked to wear masks and gloves.