Home » News » 50 percent of deaths are due to non-epidemic diseases: Dr. C.N. Manjunath 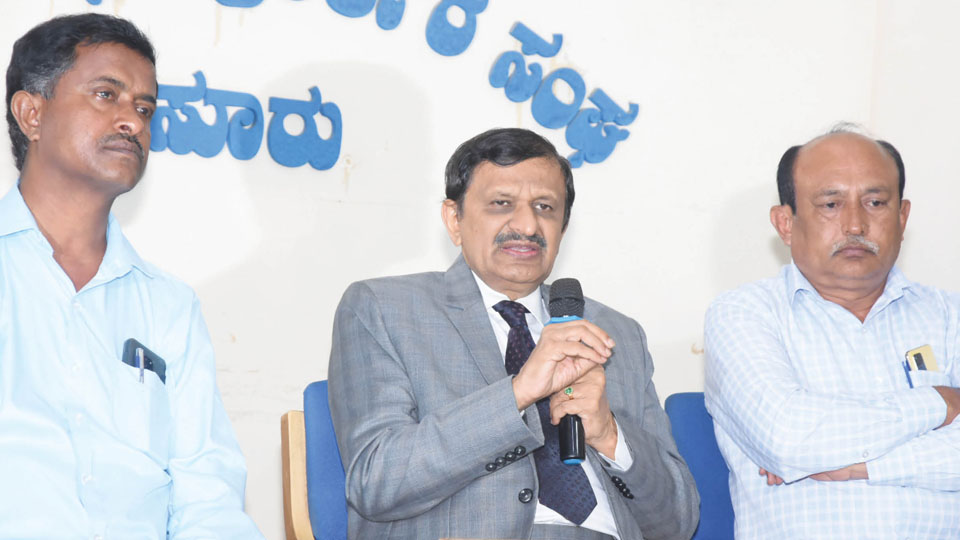 50 percent of deaths are due to non-epidemic diseases: Dr. C.N. Manjunath

Mysore/Mysuru: Stating that more than 50 percent deaths in the country are due to non-epidemic diseases such as Heart attack, Blood Pressure, Diabetes, Paralysis, Cancer and Life-style driven diseases, Jayadeva Institute of Cardiovascular Sciences and Research Director Dr. C.N. Manjunath expressed concern that 10-15 year premature deaths are rising in alarming proportions across the country.

He was speaking at an interaction meet organised by Mysuru District Journalists Association (MDJA) here this morning.

“Addiction to modern electronic and communication gadgets such as Mobile, TVs, Internet, Laptops etc., what we call as screen addiction is taking a terrible toll on the life of humans. According to a recent study, people of less than 45 years of age in the State  account for more than 30 percent of heart attacks, which is a matter of serious concern. Smoking, alcohol and drug abuse are also the primary causes for heart attacks”, Dr. Manjunath said.

Underlining other causes for heart attacks and cardiac arrest, Dr. Manjunath said that changing life-styles, work pressure and the pressures of life are the main culprits. Pointing out that sky-high goals, anger, depression, high cholesterol levels, rising sugar levels, air pollution, drug abuse, excessive consumption of energy drinks, hereditary causes, Genetic disorders etc., too play a significant role in heart attacks, he said according to a survey, nearly 60 percent of the population is suffering from heart and heart related ailments, which issue needs to be addressed at the earliest.

He advised  people of all ages to undergo periodical health check-ups as doing so will largely help people save from sudden deaths. He said people should shun junk and fast foods as much as possible and also shun other habits which pose a threat to life in the long run.

Explaining heart treatment facilities at Jayadeva Hospital, Dr. Manjunath said that Jayadeva Hospital has the largest number of Cardiology experts (105 in number) in whole of the country. Pointing out that the Hospital has adopted a practice of ‘Treatment first, payment next’, he said that there are many cashless treatment facilities at the Hospital, which the people should take note of.

He also explained on how walking and jogging every day for some time, good sleep, positive thinking and laughter will be advantageous in maintaining our physical and mental health.

Expressing concern over rising number of deaths in road accidents, Dr. Manjunath had a suggestion to the concerned authorities. He advised installation of reflectors on vehicles for better visibility of oncoming vehicles, which he said can considerably reduce the number of road accidents.

ONE COMMENT ON THIS POST To “50 percent of deaths are due to non-epidemic diseases: Dr. C.N. Manjunath”