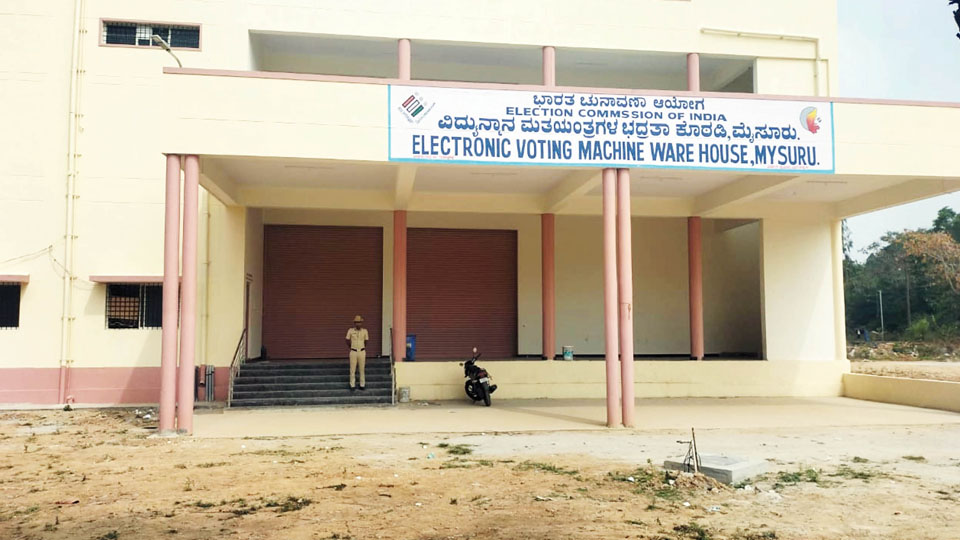 Mysore/Mysuru: Four out of 9,280 brand-new Electronic Voting Machines (Ballot Units) were found faulty and have been sent back to the Electronics Corporation of India Limited (ECIL), Hyderabad, from where all the machines along with its 9,280 Control Units were brought to Mysuru for the forthcoming elections.

The First-Level Check (FLC) of all the machines has been completed by a team of 50 officials who took four days to complete the task in the presence of representatives from political parties. All the recognised parties were informed about the physical checks and they could come and clear their doubts if any. While representatives of some parties turned up, others stayed away.

During the FLC, officials made sure that the buttons are functional and machines are recording the data correctly, and rectifying all problems. Every six months, the validity of EVMs is checked, the machines are technically re-certified, and sealed / stamped.

The machines were brought from ECIL Hyderabad recently and have been kept at the Election Commission of India’s newly-constructed Electronic Voting Machine (EVM) Warehouse that was recently inaugurated in city near the new Deputy Commissioner’s Office at Siddarthanagar.

Machines inside the EVM Warehouse have been stored as per the Assembly Constituencies in Mysuru and there are dedicated rooms for that, said Mysuru District EVM and VVPAT (Voter Verifiable Paper Audit Trail) Nodal Officer G.T. Dinesh Kumar, who is also the Commissioner of Mysuru Urban Development Authority (MUDA).

“It was a massive exercise to check all the machines and the process was done under tight security and 100 percent accuracy. All the guidelines issued by the Election Commission and ECIL were strictly followed and the machines have now been sealed and boxed. After FLC, the machines will be opened now only to train the electoral officers after the election dates are announced,” Dinesh Kumar told Star of Mysore.

The next stage of the process will be to bring VVPAT machines from ECIL. The Control Unit, Ballot Unit (EVM) and the VVPAT are interlinked and will be present at all the voting booths. The team will leave for Hyderabad in January after confirmation from the ECIL, he said.

“The four faulty machines were sent back to the ECIL after informing the DC, who is the Chief Electoral Officer of Mysuru and we will get replacements soon,” he noted.

After commissioning the machines, the EVMs are set according to the Assembly Constituency and there is enough space in the building for all the Constituencies in Mysuru. Henceforth, all the counting of votes will take place here and there are halls for the purpose. The building has been designed in a secure manner and very soon, it will be equipped with CCTV cameras and a monitoring station,” the MUDA Commissioner added.

Policemen have been deployed 24×7 at the EVM Warehouse and the security has been taken over by Nazarbad Police Inspector Jeevan, who is making daily rounds. A PCR vehicle has been stationed there and this apart, the Deputy Commissioner and Additional DC come here for routine inspections.