Home » Columns » Abracadabra By K. B. Ganapathy » A book on the lighter side of Coorg 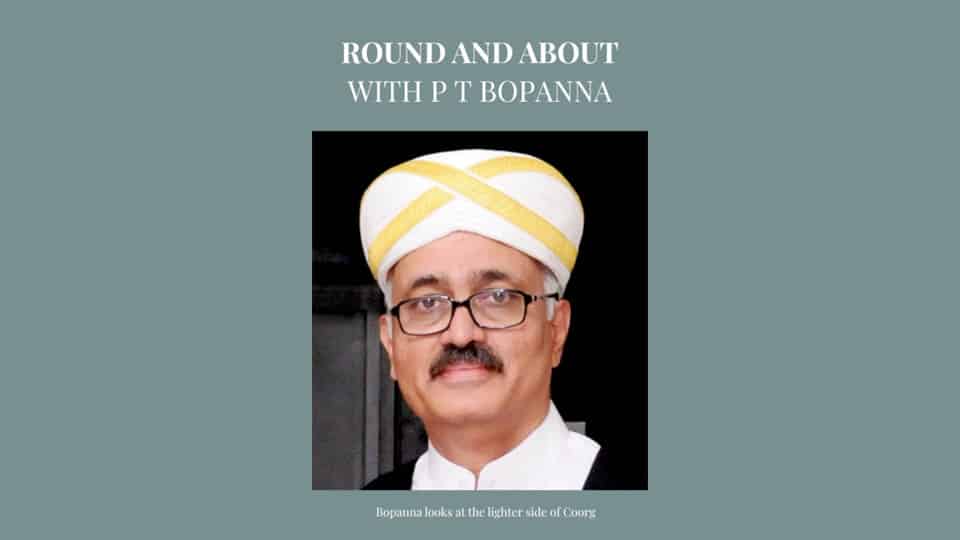 A book on the lighter side of Coorg

Yesterday morning as I sat at my working desk, there sat a brown cover addressed to me on the table.

It came from Palanganda T. Bopanna, a journalist author from Bengaluru. Inside was a thin book with a thick hard cover embellished with the photograph of the author in his ethnic Kodava headgear of a peta adorned with a pattern of golden strap crossing each other as if hugging the peta. The title of the book is quite revealing and says what it contains:

‘Round And About With P.T. Bopanna’ with a bottom line: Bopanna looks at the lighter side of Coorg. Himself being a Kodava (Coorg), his writings here are of Kodagu related subjects or about himself with VIPs. I finished reading it in one hour and here I am writing about it. This was possible because each of the 25 pieces inside, including the Foreword by the Kodava iconic Fashion Guru of India Prasad Bidapa and the Epilogue, are no longer than two or three pages in fairly larger font and pictures. Good reading for those familiar with Kodagu (Coorg) and the people written about in the book.

There is a Preface also by the author and I was delighted to find the names of Mr. Boverianda Chinnappa and Mrs. Nanjamma Chinnappa, now residents of Mysuru, being mentioned for their “valuable suggestions” in bringing out this thin book of 68 pages. “The couple has been a source of strength to me in my book and web ventures,” he writes in gratitude.

As a Kodava myself, I know there are any number of Kodavas all over the world engaged in different activities and pursing professions who have become great achievers. Kodava people belong to a microscopic minority as a population who lived in a land of their own known as Kodagu ruled by Nayaks and then Kings and then the British, now a district in Karnataka.

The land area cannot increase but population increases. As a result when the family grew, its land-holding was not sufficient for running the family. Perforce they got themselves educated and some members had to leave Kodagu and then Kodava (Coorg) diaspora became a reality. Fortunately those who went out of Kodagu, a great majority of them, are doing well and very well. Some of them became celebrities and some are recognised by the governments. But there are other achievers who remain without public recognition but doing very well in their given profession, business or industry.

One example for anonymous achievers and distinguished persons among Kodavas is given in the book itself in the person for whom the book is dedicated (page 3). He is Pemanda Monappa Belliappa, a retired IAS Officer of Tamil Nadu.

Acknowledged as an outstanding administrator, Belliappa was decorated with MBE (Member of the British Empire) by the Queen of England. More than this, he established ‘Pemanda Monappa Scholarship’ in Cambridge University in perpetuity, in the name of his father, Pemanda Monappa, former Karnataka Inspector General of Police. Nearer home, he has also made handsome donation to the Coorg Education Fund, Madikeri. People like Belliappa are indeed the pride of Kodagu. There are many such Stars of Kodagu!

Bopanna, who claims to be a chronicler of Kodagu or Kodavas, may also venture to trace all those achievers among them, after independence of our country (1947) and publish a book with their biodata. This would be a great contribution from him to the Kodava people.