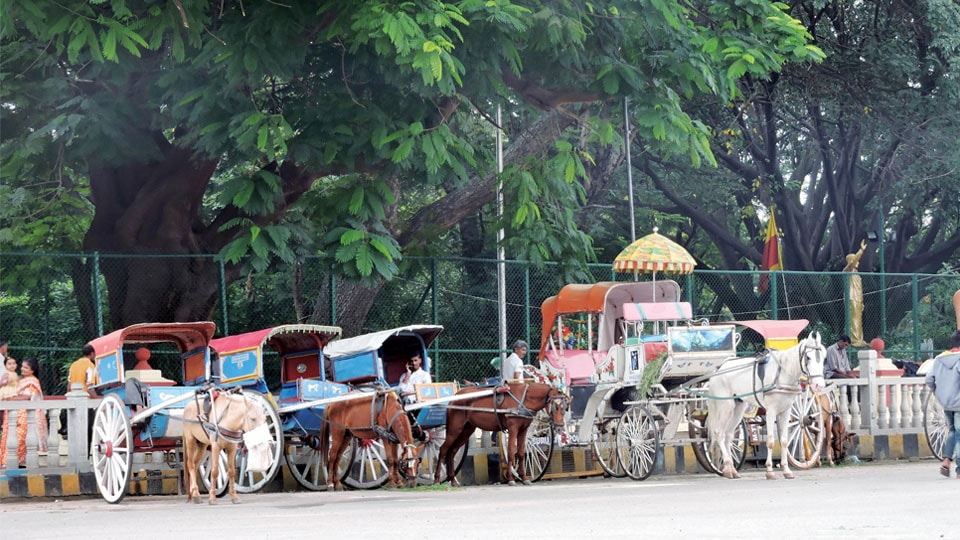 A Ride of Royalty

Dasara is that time of the year when Mysuru skies take on varied hues, streets across the city dazzle with beautiful decor, festivities galore and the excitement is palpable at every shining corner. Mysuru lives up to its sobriquet of Royal City and Dasara is the best time of the year to re-live the glory and splendour of the bygone era.

If you vicariously felt like a royal during the visit to the majestic Mysore Palace, do make sure to take a ride in Tonga that toggles your ride between the majesty of yesteryears and the marvels of today. The carriages (buggies), elegantly drawn by majestic equines, ensure that the reminiscence of the royal kingdom is witnessed partly at least.

Mysuru is among the few places where Tongas still exist. They have a long history, dating back to the Maharajas when horse-drawn Tongas were the preferred mode of transport. Now used only for joy rides, Tongas are fun, cheaper to hire and eco-friendly. There are 40 Tongas and 20 Sarots that operate within the city. Sarots, also called ‘Victoria’, have four wheels and can carry up to eight people. Tonga or ‘Mysore Shah Pasand Tonga’ are two-wheeled, can load up to four people and are pulled by a relatively small horse.

The Sarots, introduced by Nalwadi Krishna Raja Wadiyar, during his reign have since been an integral part of Mysore tourism. The business of these tongawallas peaks during Dasara. A Sarot costs around Rs. 3 lakh and the sturdy horses that pull these carriages cost between Rs. 1 lakh – Rs. 2 lakh depending on their breed.  The smaller Tonga can range between Rs. 25,000 – Rs. 50,000 and the small horse suited for the Tonga can be bought between Rs. 10,000 and Rs. 25,000. Horses are brought from Bijapur and all the Sarots are from Patiala in Punjab. Nationalised banks grant loans to purchase these carriages.

Fayaz Ahmed, President of Horse-drawn Chariots Association, says Dasara draws visitors and Sarots are a favourite as they look unique and royal. He also adds that it is because of the royal family and their love for animals that they are still able to sustain and survive. The space provided opposite Palace’s Varahaswamy Gate serves as a platform to draw tourists. He further adds that the City Police have been really helpful in running their business.

M. Murali, a tourist from Kerala, was excited after the Tonga ride. “I had heard of Mysore Dasara being special and it is for the first time I took the Tonga ride. These buggies look similar to the Victoria buggies of England. A Tonga ride through the Heritage City was a different experience,” he recalls.

A ride worth it

“I was advised by my friends not to miss the Tonga ride and my Tonga trip around the Palace and gazing at the illuminated streets and buildings was worth it. The Tonga had music system and colourful lights too which was an awesome experience,” opines Subhash Babu, a tourist from Hyderabad.

Siraj, who has been steering a Sarot, says, “I charge Rs. 300-400 for a ride around the Palace and other heritage sites and during Dasara I charge extra as it takes a lot of time to complete the ride because of traffic. I earn around Rs. 1,000 to Rs. 1,500 per day and I spend around Rs. 350 for the maintenance of the horse. He further adds that he also provides carriage services to functions and marriages and charge between Rs. 1,500 to Rs. 5,000 depending on the time and distance.

Apart from Sarot rides, some people still prefer the two-wheeled Shah Pasand Tonga that charges Rs. 150 to Rs. 200 per ride. These Tongas are found near the Palace’s Balarama Gate, Varahaswamy Gate, Mysuru Zoo, St. Philomena’s Church and Jaganmohan Palace. They are parked at the parking lots during the night which are provided by the Government near RMC, opposite Sub-urban bus stand and near Kalamandira.

Tongas get a makeover every year and the buggies get painted and seats changed if required. Doctor visits are arranged once in 2 months.

Like every business, even Tongawallas face problems once tourist season gets over and they have to manage their living with just a few rides during off season. Fayaz Ahmed expresses his disappointment and says that their request of sanctioning Tonga stands is still pending.

“There are several auto and bicycle stands around the city and our request for Tonga stands has fallen on deaf ears. Our horses get tired and thirsty, waiting for customers in scotching sun. I hope that our animals are provided with shelter stand and water facility,” he says.

Siddappa, Secretary of Shah Pasand Tonga Association says, “Tourists from all over the country visit Mysuru to witness Dasara. Our Nada Habba is world famous and we make sure that every tourist experiences this joyful ride as we try and maintain the heritage culture.”

“We plead to the Government to look into our requests and resolve them,” he appeals. Siddappa is also disappointed as the uniforms and Mysore Peta which were provided to Tongawallas in the previous years ahead of Dasara, have been discontinued.