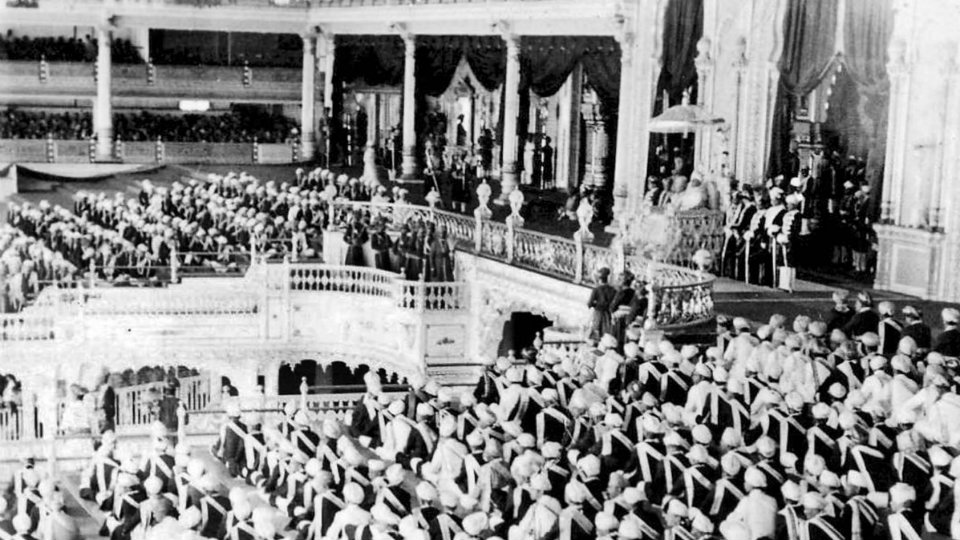 Mysore Palace is one of the most elegant buildings about which every Mysurean, nay, Indian should take pride. The fact that it has been drawing footfalls exceeding those visiting the world-famous Taj Mahal in Agra shows what a grand structure the Mysore Palace is. But the century-old structure is raising concern of recent. On Sept. 20, a small portion of the roof collapsed due to heavy downpour. It is also reported that there are numerous cracks on the roof and walls of the Palace and also leakage of water into the grand structure when it rains. All these reports raise doubts over the care and maintenance of the most prominent heritage structure of Mysuru.

Those who have seen the grandeur of the Palace during the Dasara celebrations conducted by the last ruler of Mysore, Sri Jayachamaraja Wadiyar, will never forget what a beautiful sight it was. It was the sacred house where one of the holiest festivals, Navaratri, a nine-day ritual of worshipping the Goddess, was conducted with reverence by the Maharaja. The Durbar in the glittering hall was a sight, perhaps one could compare to the court of the Puranic God, Indra, as described in the Puranas. In fact, that is how Kannada poets, who have seen the grand celebrations of the Maharaja during their period, have described in their poetical narratives.

During the Durbar of the Maharaja, the Durbaries invited were chosen and limited. The courtiers went to the Palace with great respect and reverence to the Maharaja and his royal abode. They would not talk loudly but only whisper. The Palace officials ensured that everything was orderly, speaking in hushed tones. In spite of a number of Durbaries, the hall and the other portions of the Palace were maintained spic and span with utmost care. An annual upkeep a few weeks before Dasara was a regular exercise. Hence, there was very little reason for concern about the safety or sanctity of the place.

Soon after Jayachamaraja Wadiyar lost his royal status as Maharaja in 1970, he gave up holding his Durbar and the Dasara celebrations. The issue of invitations to prominent personalities of Mysuru to attend the royal ceremony was stopped. Similarly, the issue of passes for tourists on other days was also given up. The abolition of privy-purse the following year was a sudden blow to the Maharaja and placed him in financial distress raising issues he had not faced earlier. A large number of Palace staff was retrenched. The royal celebrations were discontinued.

When the Government began to sponsor the Dasara celebrations in 1975, the year after the passing away of Jayachamaraja Wadiyar, the Palace courtyard became the venue for launching the Dasara procession. Five years later, the Durbar Hall became the venue for music concerts. Only a limited number of people, mostly important personalities, were given invitations for these concerts. Generally, their number did not exceed around 600.

After a few years, concern began to be expressed about the safety of the Durbar Hall with so many people sitting in the royal hall. This became a major concern though there were other minor issues like disturbance caused to the renowned artistes while they were performing. Some people were leaving the hall during the performance and some others were talking to each other, instead of listening to the music. Musicians began to complain that their concentration was being affected.

Taking these factors into consideration, the venue was shifted to the open courtyard in 1991 to prevent damage to the structure. This also made possible for a large number of people to witness the Dasara concerts in front of the Palace.

The acquisition of the Palace by the State Government in 1998 gave a new dimension to the developments. The Palace was converted into a tourist attraction, with an eye on revenue. The rest of the things — either the importance of the Palace as an inviolable place where the Navaratri was conducted with reverence or its meticulous care by the Maharajas — took a back-seat. Attention turned towards drawing visitors in large numbers promoting the century-old structure as a tourist attraction.

In this changed scenario, where the grandeur and beauty of the Palace as one had seen during the reign of Jayachamaraja Wadiyar was lost, the Palace too lost its glory and prominence as a royal house of respect and reverence. Instead, today it has become a showpiece for tourists. Attention has turned towards commercial promotion of Palace as a ‘must’ place for tourists. It now draws around 9-10 thousand visitors daily. The highest number of visitors on a single day is said to be 36,000.

Added to this huge footfall, another recent development is of accommodating members of the judiciary and senior officials of higher level with their relatives, and the presence of Police personnel for security reasons in the Durbar Hall to witness the inauguration of Dasara procession. According to a report, their number is as high as about 2,000.

An outcome of allowing so many people into the ‘Sejje’ has led to one more problem — littering in the hall considered sacrosanct as rightly highlighted by the royal scion, Yaduveer Krishnadatta Chamaraja Wadiyar, on Instagram, after the inauguration of the Jumboo Savari procession in 2016, with a photo of the litter in the Durbar Hall.

His post reads: “The aftermath…We cannot take our cleanest city tag seriously when the very Icon of our city is treated in this manner. When will the people understand that the Durbar Hall is not a theatre? Never has anyone at any point been allowed to consume food at the Durbar Hall, let alone throw around their trash like in some theatre (Not that we should throw trash around in a theatre). We should understand at some point that we must preserve the sanctity of our sacred festival, our great city, and its landmarks. Hope this blatant disregard to our most sacred building is not an annual feature.”

Speaking to this writer, Raja Chandra, son-in-law of Maharaja Jayachamaraja Wadiyar, voiced his concern in accommodating as many as 2,000 people in the “Sejje” and said: “I think a decade ago itself, based on an engineering report, events in the Durbar Hall were shifted down due to safety reasons. It is absurd and dangerous to allow as many as 2,000 people to sit at the same time. It should be opposed by all right-thinking people.”

In the background of these developments, the time has come to think about the safety of the century-old grand Palace, while many other heritage structures have reached a stage of collapse due to lack of maintenance in Mysuru.

In many countries abroad, tourists are allowed into such heritage places in batches of specified numbers at specific intervals. Similarly, authorities should limit the number of visitors and allow them in batches at regular intervals into the Palace, opines a heritage expert. This staggered admission of visitors into the Palace would also avoid gathering of crowds in one place and help visitors see the artifacts easily. Besides, the Durbar Hall is of RBC (Reinforced brick-concrete) construction — a traditional technique using locally made high-quality bricks, stone chips, and lime mortar, unlike reinforced concrete terrace of the present day.

Conservation experts are of the opinion that a long-term conservation plan is urgently needed since the construction of the Palace is past a hundred years. Such a study should have been initiated about 30 years back alone. In fact, a suggestion to this effect had been made to Kumara Naik when he was the Deputy Commissioner of Mysuru, as he was also the Chairman of the Palace Board. He had shown keen interest in it. With reports of cracks on the walls and rainwater soaking some interior portions of the Palace, which might be causing damage to the strength of the structure, a long-term conservation study is urgently needed, taking into consideration all factors of the structure and the present condition. If the jewel of Mysuru is to be preserved for posterity, like the heritage structures in England and Europe which are being conserved and preserved since a couple of centuries, such a conservation study should be initiated by experts of a national and international-level without further delay, they opined.

2 COMMENTS ON THIS POST To “Palace Durbar Hall, a concern”