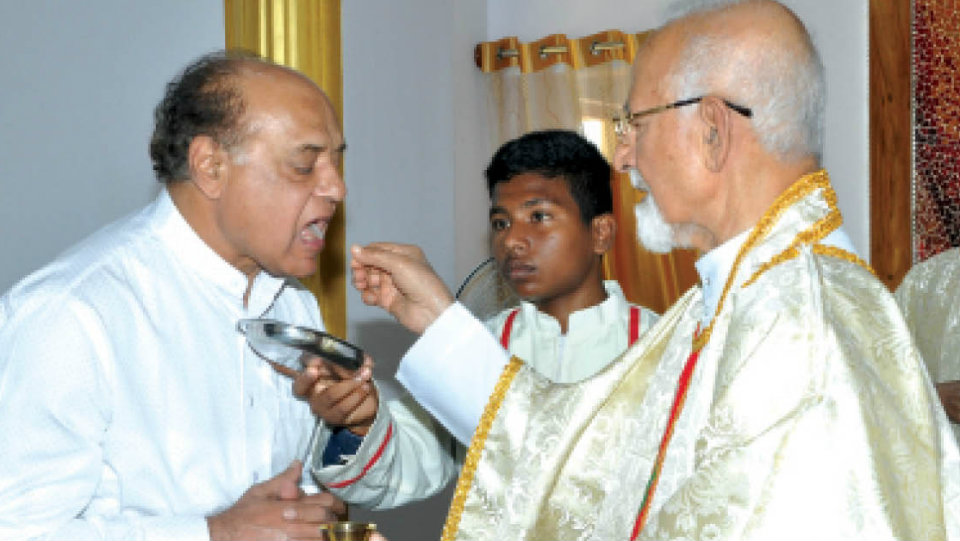 A tribute of love: Fr. Denis Noronha – Human being extraordinaire

Life is a stage on which each of us have to play a part (with apologies to the Bard) and the performance of some is extraordinary, as with the case of my very dear friend, mentor and guru Father Denis Noronha.

From the early 90s after my transfer from the Bombay High Court to Karnataka, I used to visit Mysore as it then was, very regularly as I was requested to be a Visiting Professor at the Mysore University (of which Institution I was a one-time Gold Medallist), as also the Administrative Training College where Senior Government Officers used to come for specialised courses.

There was a third reason for my visits in so far as I was privileged to associate myself with a group of exceptional professionals who used to take up important public causes, some of the names that I still remember are Dr. Bhamy V. Shenoy, Dr. H.A.B. Parpia (late), Maj. Gen. (retd.) S.G. Vombatkere and Sheila F. Irani (late). Together, the Mysore Grahakara Parishat (MGP) had taken up a host of social, political and human rights issues and never lost out on any of them.

I was also a regular speaker with many other organisations and that was the time when I met Fr. Noronha and the one and only veteran journalist in the form of K.B. Ganapathy whom I felt was better suited to be the Head of the Department of English Literature at the University!

The amount of media support that we got from Ganapathy was to a large extent responsible for the phenomenal successes. From those early days, the Trimurti of Fr. Noronha, Ganapathy and myself formed a bonded relationship that has endured through the years.

What amazed me and all others about Fr. Noronha was that he possessed a rare level of brilliance, he was a financial genius with a midas touch, every project that he handled ended in spectacular success; yet his brains never went to his head and he virtually oozed kindness to all human beings and the beneficiaries of his talents over the span of five decades whether it was in Schools, Parishes, Institutions from the highest quarters to the lowest, were innumerable.

Despite all of this, I have never come across a more genial and simple person with that disarming smile that was ever present —even in his illnesses and ailments which were many, and right up to the end when I thought he could have received better care and treatment.

What was unusual was the fact that persons at the highest level of politics, the top Swamijis, intellectuals and all others, developed an instant love and respect for him which was intertwined with esteem and regard.

He left us recently for a well- deserved and rich reward but he was an exceptional role model. I was upset at one stage, many years ago, when he was asked to leave the top positions in Mysore and move to Mandya and I decided to request the powers that be to reconsider this decision because he would be wasted there. He smiled and said to me that moving up in life is grand but not many can take the downward moves — he was unfazed, went to Mandya and completed the magnificent edifice of the Church there which stands out and totally overhauled and recreated the Educational Institutions.

We imbibed a lot from him which only made life richer. I was, therefore, not at all surprised to read the brilliant tributes to him from Ganapathy which, apart from his inimitable talent, displayed a lot of feeling. Fr. Noronha was blessed with a long life, exceptional success and recognition but what stood out most as far as I was concerned, was that unadulterated love which flowed from him and the nicest part of it was that I never once through the years, even when he was down and out in hospital, missed out on that warm ever-present smile and the wit and humour that added to the sparkle.

Partings are always sad, particularly in this case and one recalls the lines from Alfred Lord Tennyson, “Oh, for the touch of his vanished hand and the sound of his voice that has gone still….!!”

Truly, here was a man who strode through his life path through an act that was par-excellence. Goodbye Father, you inspired us !!

Note: Once on my way to Bengaluru, I broke my journey for a few hours to visit Fr. Noronha in his Mandya Church. Like his legion of friends, I too was sad about his new situation under the new Church dispensation.

He had always been a very good host. While at the table as usual we cracked some jokes. When time to take leave came I told the Father, again by way of a banter, “Father, now you don’t have to serve the Archbishop, the Cardinal or the Pope. You will serve ONLY Jesus the Lord.” – K.B. Ganapathy,  Editor-in-Chief