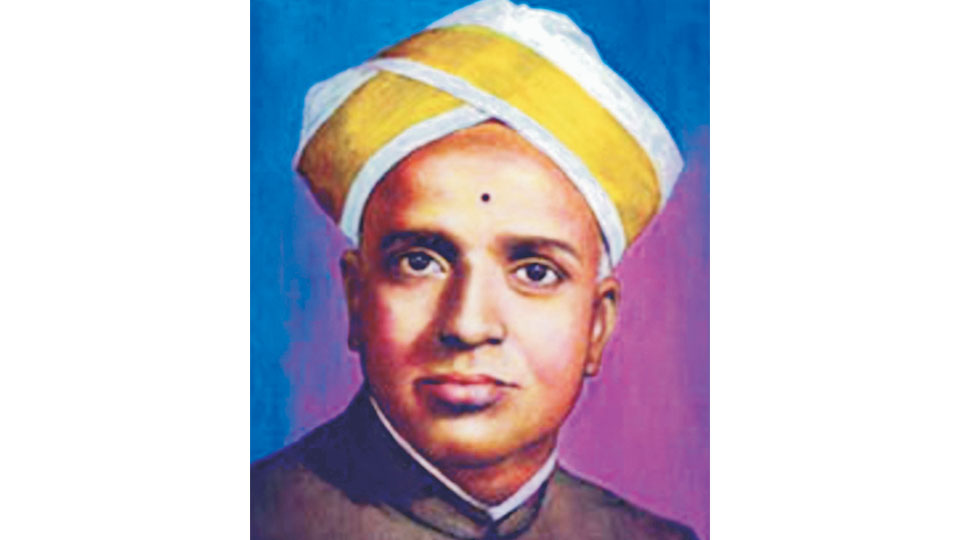 H. M. Nayak described him as Kannada Senani ! His rendition of Mahabharata titled ‘Vachana Bharata’ remains to this day one of the most widely read versions of the great epic in Kannada. He introduced the great writers of Bengal — Tagore and Bankim Chandra — to a generation of Kannada readers through his translations and biographies. He was responsible for bringing the Kannada periodical ‘Prabuddha Karnataka’ into circulation. His published works which run to about 4,000 pages cover a vast array of writings, translations, abridgments, lexicography work and biographies. This modern incarnation of Vyasa was none other than A.R. Krishnashastry. This is a small tribute to him on his birth anniversary today. A.R. Krishnashastry breathed his last at Bangalore on 1st February, 1968 at the age of 78 years.—Ed

Ambale Ramakrishna Krishnashastry was born on 12th February, 1890 at Mysore. His father Ambale Y. Ramakrishna Shastry was a renowned teacher in logic and Sanskrit grammar at the Maharaja Sanskrit Mahapatashale. His mother was Shankaramma. He was their first male issue. Even though christened at birth as Krishnashastry, he was seldom addressed by that name ever. All through his childhood and up until his B.A. graduation, he was always addressed as Ramakrishna Shastry. When it came to registering his name for the official degree, the name Krishnashastry seems to have crept into his official life.

His childhood seems to have been spent in and around the streets of Devirammani Agrahara in Mysore. His paternal ancestors hailed from Ambale village near Chikkamagalur and were of Hoysala Karnataka ancestry. There was a rich tradition of Sanskrit education prevalent in the family and A.R. Krishnashastry was tutored by his father from a very young age. In fact, even at the age of 4 to 5 years, Shastry was accompanying his father to the Sanskrit Mahapatashale to sit in audience and listen to his father’s classes. In this way, Krishnashastry had mastered the ‘Amarakosha’, Sanskrit grammar and a number of Sanskrit shlokas at a very young age. His father also took a keen interest in tutoring young Shastry in Kannada as well. Krishnashastry was well- versed in Kalidasa’s ‘Raghuvamsha’, ‘Kumara Sambhava’ and ‘Champu Ramayana’ by the age of ten. Sadly, he lost his mother around this time to plague.

With the passing away of his mother, Shastry’s father took upon himself the task of running the house while supervising his son’s education. Shastry’s father also had his elderly mother and younger sisters to look after. In spite of these and more challenges at home, Krishnashastry managed to stand first for the district in the lower secondary exam at the age of sixteen. Though by this age, many of Shastry’s peers had already completed their matriculation and were well into their F. A. course, Shastry’s academic progression while slow was nonetheless impressive.

Balancing household chores and helping his father run the family gave young Shastry a degree of maturity and worldly wisdom that many of his classmates evidently lacked.

Shastry joined the Wesleyan Mission High School for his further education. By this time, his father had arranged his wedding to Venkatalakshmamma. Shastry, owing to his consistently good academic performances, had the good fortune of getting the Merit Scholarship for all three years of his tenure here. This was a testament to his steadfast dedication and devotion to his studies. Maasti Venkatesh Iyengar, a classmate of Shastry during these years, reminisces in his biography that there used to be a healthy competition between the two for most of the literary events held at school.

Shastry always nurtured an ambition to pursue his higher studies in the sciences. This would have meant that he had to relocate to Bangalore and then study at Central College. This entailed an expense that was ill afforded by a Sanskrit teacher! Alas, young Shastry had to settle for History and Language studies at Maharaja College, Mysore, which was then under the Madras University.

Maharaja College, Mysore, during these years had a distinguished faculty in most subjects — Sanskrit (and Philosophy): M. Hiriyanna, Philosophy: S. Radhakrishnan, English: B.M. Srikantiah, History: Radha Kumudh Mukherjee and for Economics: K. T. Shah. While there was no dedicated Kannada Department, stalwarts like Kanakanahalli Varadachar and P. R. Karibasava Shastry did their best to impart Kannada education in the traditional mould. Shastry was greatly influenced by B. M. Srikantiah’s versatile knowledge of both Western and Indian poetry, linguistic theories and the like. He was also influenced by the simplicity, generosity and meticulous attention to detail by M. Hiriyanna, with whom he retained a lifelong friendship. Krishnashastry learnt the nuances of Sanskrit language by studying Vedanta and Kavyamimamse from Hiriyanna. He reminisced in his later years the true to life renditions of plays by K. Varadachar.

Once, Sir M. Visvesvaraya was a judge for a debate competition and had a rather tedious two hours listening to every other contestant go on and on about one or the other topic. At the end, it was Krishnashastry’s turn. Shastry was so crisp, clear and concise in his elucidation of ideas that Sir M.V. summoned the young student and personally applauded him. This unique ability to express ideas in a most affable yet concise manner became a defining characteristic of Krishnashastry in years to come.