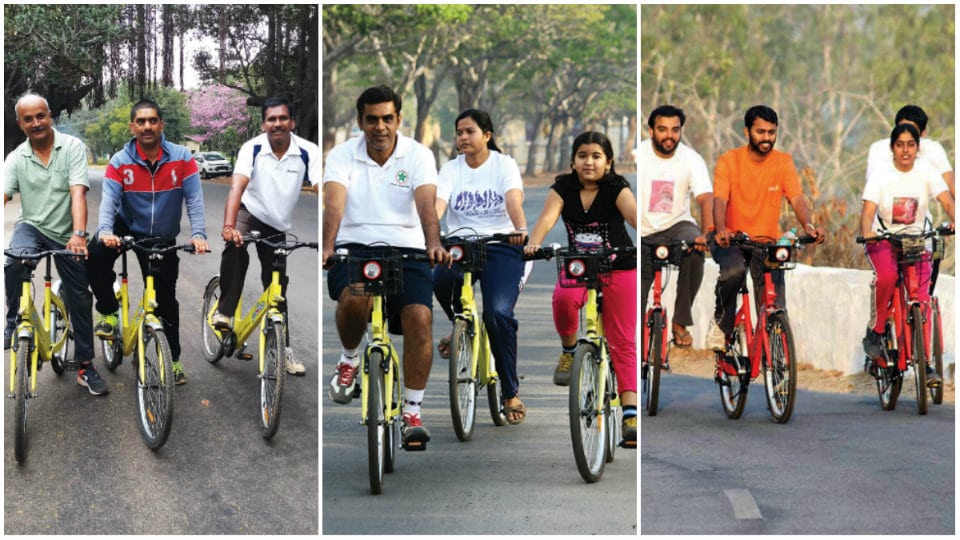 The Adventures of TRIN TRIN

The weather is perfect… The green cover is just fine… And there’s enough history and wide roads to go around. Mysuru has whole-heartedly accepted cycling, the European way of commuting. It is Asia’s first city to get Public Bicycle Sharing system. This Weekend Star Supplement is about Trin Trin, an initiative of Mysuru district administration to promote healthy life and cycle tourism.

Eight to six months before June 2017, the traffic scene was bumper-to-bumper on all the main roads in this growing heritage city especially during peak hours. Commuters were forced to spend more time, money and energy on roads and without any alternative and cheaper modes of transport. Most of them were kept wondering, is Mysuru going the grid-locked Bengaluru way.

And then came Trin Trin, the Public Bicycle Sharing system and the rest, as they say, is history. History was indeed made in Mysuru when the city accepted cycles as their new means of transport with open arms. 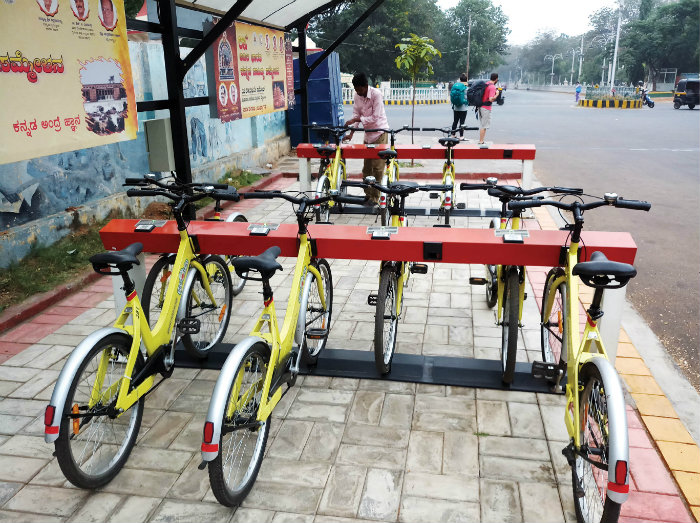 Picture shows one of the docking stations on Veene Seshanna Road,
opposite Maharaja Sanskrit College.

Trin Trin, or in short PBS for Public Bicycle Sharing system, has come as a blessing to Mysuru and there has been a significant increase in the number of cyclists over the past few months — a small step that will lead to a mass movement one day.

Most of the people, who were earlier going on morning walks, prefer to pedal now. This is not all. PBS has many users from student community, especially those who come from rural areas. Most of them pick up bicycles from docking stations at City and Sub-Urban bus stands or City Railway Station and reach their schools and colleges. Earlier, they had to change one or two buses to reach their institutions.

Ever since Trin Trin was launched, a total of 7,466 people have registered. Currently, PBS has recorded 800 to 1,000 rides per day and project implementers Green Wheel Ride hopes the numbers to increase.

Trin Trin’s specialty is that bicycles are manufactured in Mysuru itself. The frames were supplied by city-based Bhoruka Fabcons Private Limited. Currently there are about 450 bicycles, including 20 geared ones. 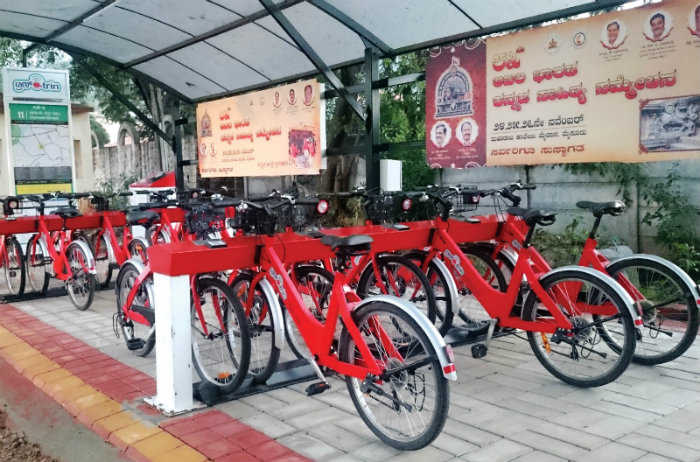 “Trin Trin has helped us a lot. Authorities have taken utmost care to maintain the bicycles despite daily use. We cycle daily for about an hour after our walk on Kukkarahalli Lake bund. I use the bicycle even to reach the City Railway Station and Sub Urban Bus Stand,” said Suresh, a resident of Kuvempunagar.

Trin Trin has been launched with an objective of encouraging local commuters as well as visitors so that they can cycle instead of using other modes of transport which cause pollution and traffic snarls.

“We are thankful for the authorities for introducing PBS. It not only helps in keeping ourselves fit but also reduces pollution. The system has been most beneficial both for morning walkers and students,” says Raju, an employee of an electronic shop.

Trin Trin, the Government of Karnataka project, is partially funded by World Bank under the Global Environment Facility (GEF) Grant. The project is planned and implemented by Directorate of Urban Land Transport (DULT) and Mysuru City Corporation (MCC).

“The response to Trin Trin has been tremendous. We had expected around 2,500 to 3,000 registrations but the numbers are much more than expected,” said

Mysuru being a city of heritage buildings and various tourist spots, there is always an opportunity to promote cycle tourism.

“We have already launched schemes for the benefit of tourists. They can rent bicycles for a day, couple of days or even for a week. We are also issuing temporary cards after collecting deposits. Once the card is returned, the deposit amount is handed back to the user. MCC is also making arrangements at various hotels to issue cards to interested tourists,” adds MCC Commissioner G. Jagadeesha.

This apart, the MCC has embarked on creating a 20-km exclusive lane to facilitate cycling. However, the plan is yet to take shape.

One can expect dedicated cycle lanes like the ones near Karanji Lake and near Lalitha Mahal Palace Hotel to come up during the second phase of Trin Trin. 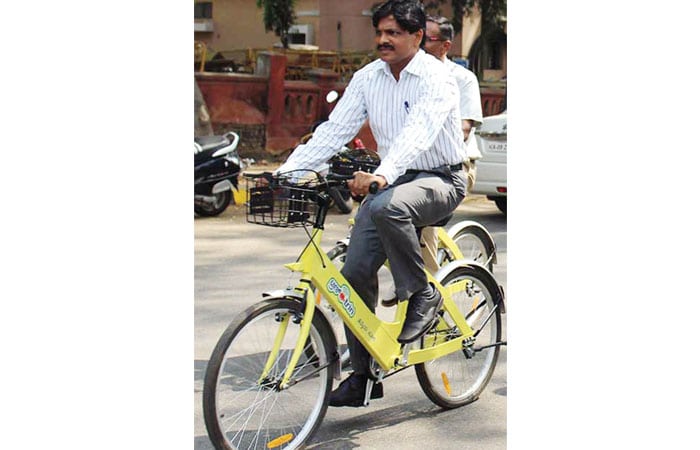 Here is an officer at Muzaffarnagar in Uttar Pradesh, who pedals to his office daily. Meet Additional District Magistrate (Executive) Harish Chandra, a 1997 batch Provisional Civil Service officer, who has set an example. He not only travels to his office on a bicycle but also attends to his personal work on it.

Speaking to Star of Mysore over phone from Muzaffarnagar, Harish Chandra said that cycling helped him stay fit and save fuel. “I don’t ride a costly bicycle but a basic one. It helps me stay connected with the common man whom I work for. I visit the market on my bicycle which helps me understand the basic problems of the people, he said. 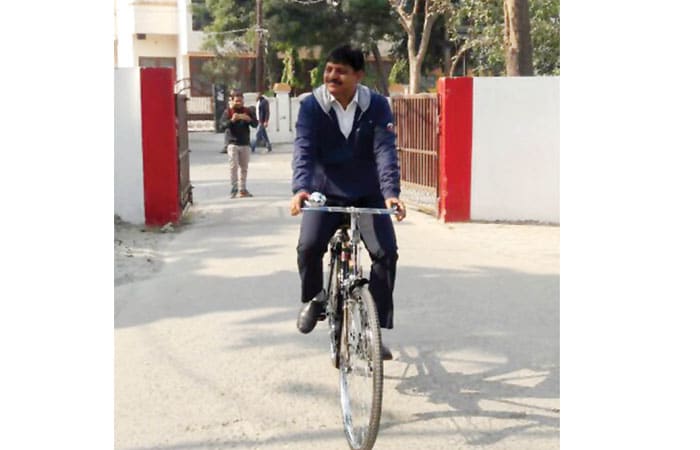 Harish Chandra has not only inspired his subordinates and higher officials but also a few advocates at his place who have decided to pedal to work.

Officials who pedalled their way to glory… 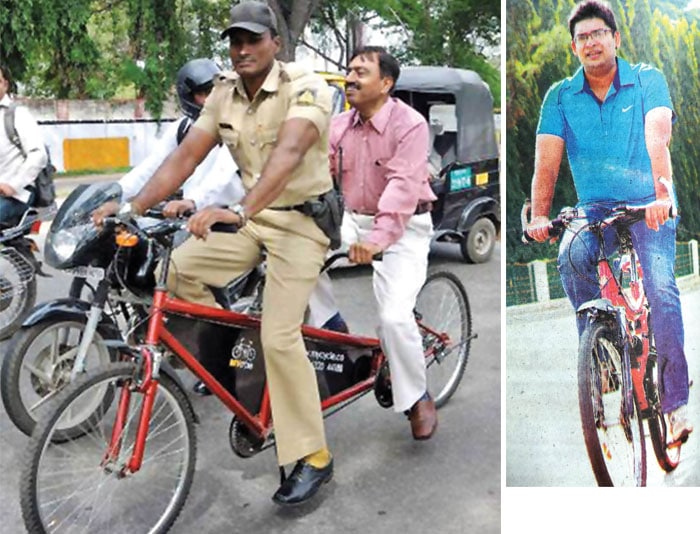 The then DC P.S. Vastrad (left) riding a tandem bicycle along with his gun man. The then ZP CEO Dr. M.N. Ajay Nagabhushan enjoys his ride.

However, the initiative did not continue for long and project was shelved as officers found it difficult to attend emergency meetings and inspections.

When Star of Mysore asked Mysuru Deputy Commissioner D. Randeep about re-introducing the ‘Cycle to Work’ initiative, he said that personally he has no issues with coming to office on a bicycle but said that the same cannot be forced upon other officials as they would have to attend official works. 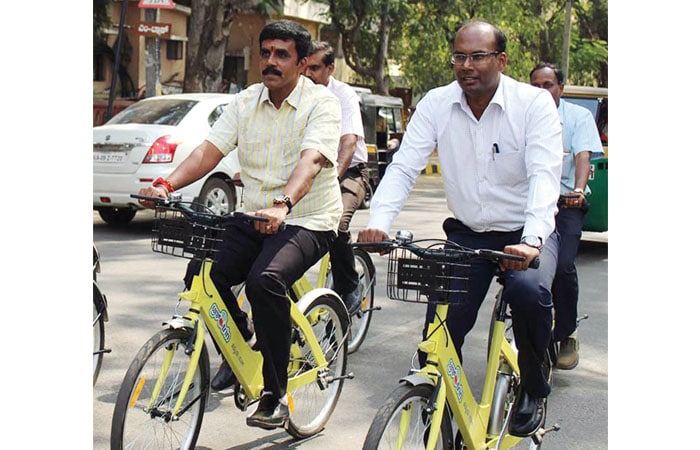 MCC is planning to come up with 50 more docking stations in the second phase. There are also proposals to setup dock-less stations where bicycles are parked used geo references. MCC is preparing a blueprint for the second phase.

Under the dock-less station facility, authorities will mark a dedicated parking area where bicycles are parked after being used and bicycles are monitored round-the-clock. One can also monitor the exact location of the bicycles through GPS.

Hawk’s eye on cyclists: The staff at Trin Trin control room in Jayanagar monitoring the docking stations across the city with advanced GPS gadgets and big TV screens.

“There have been demands to setup docking stations at Kuvempunagar, Vivekanandanagar and surrounding areas. Till date, we have not reached these areas as the focus was to set up stations in the heart of the city. However, authorities would decide on setting up docking stations at new locations,” said Manager of Green Wheel Ride Asha Kerakatty.

Trin Trin Smartcard is unique in its own way. The front part of the card has the animated representation of a tourist visiting the Mysore Palace on a bicycle and taking photographs and there is also a picture of an elephant carrying the Golden Howdah. 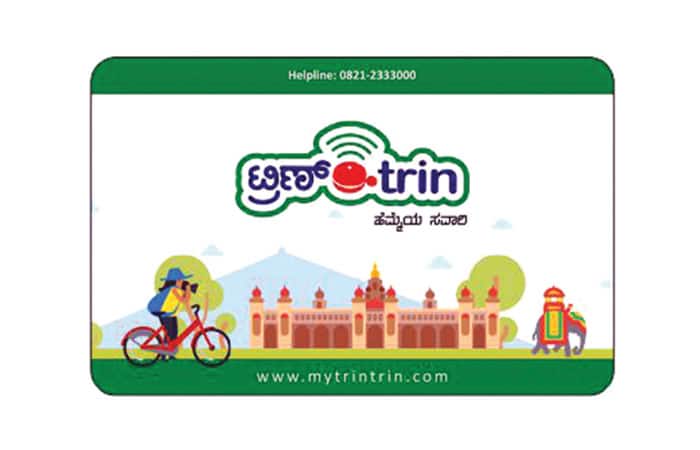 The District Administration has made the maximum use of the back portion of the card to promote Karnataka tourism by showcasing destinations such as Rajiv Gandhi National Park (Nagarahole National Park) in Kodagu, Pattadakal in Bagalkot, Dandeli in Uttara Kannada, Sakrebailu Elephant Camp in Shivamogga, Shivanasamudra Falls in Mandya, Vijaya Vittala Temple in Hampi, Bidar Fort in Bidar and Shravanabelagola in Hassan.

The back design of smartcard that features tourist destinations in Karnataka.

The card has an invisible chip embedded inside which is recognised by the sensor on the card reader while a user takes out and keeps back the bicycle at the docking station.

Once the registration process is complete, a Trin Trin Smart Card will be issued to the user after Rs. 350 is paid which includes (Rs. 250 registration fees, Rs. 50 processing fees and the remaining Rs. 50 can be utilised by card holders).  Every month, a minimum of Rs. 50 must be added to the smart card depending on the usage.

After reaching the docking station, one has to place the Trin Trin Smart Card on the card reader next to the required bicycle. Once the car reader scans data, the LED lights blink before the bicycle is unlocked.

While returning, one has to slide the bicycle clip firmly into an empty dock and wait for the transaction to be complete. Here too, the LED lights will blink and the ‘Ready’ button shows. 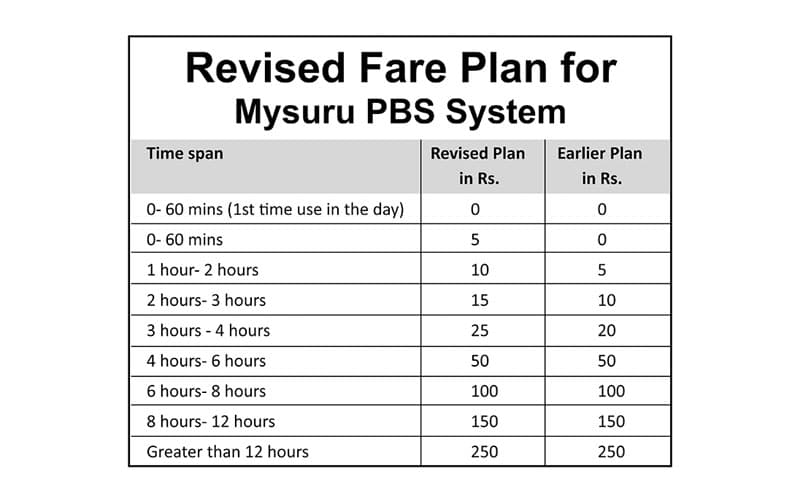 Following the success of Trin Trin in Mysuru, the Bruhat Bengaluru Mahanagara Palike will soon introduce a public bicycle sharing system. BBMP Commissioner N. Manjunatha Prasad said, “We are excited about launching this project. It will help thousands of Bengalureans cover short distances, in lesser time than travelling in buses. It is pollution-free and economically viable for commuters.”