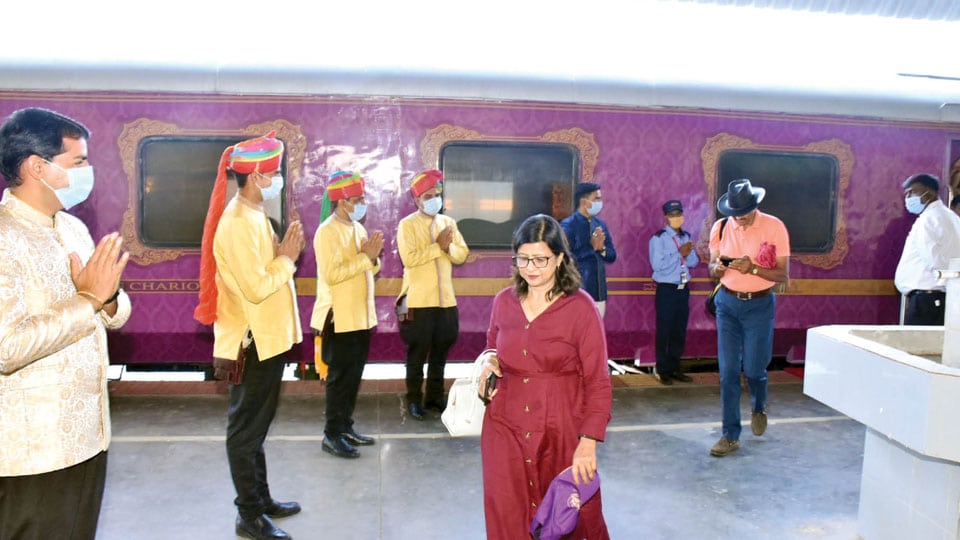 After overnight stay in Mysuru… Golden Chariot leaves for Srirangapatna

Mysore/Mysuru: After almost two years of hiatus, the Golden Chariot, a luxury tour on wheels offered by IRCTC, chugged in Mysuru yesterday, as part of ‘Pride of Karnataka’ package.

With 23 tourists on board, the high-end train arrived at Mysuru Railway Station on its six nights and seven days tour visiting various destinations in both Karnataka and Goa. A grand-cum-traditional welcome was accorded when the Golden Chariot arrived in city. Officials of IRCTC received tourists in traditional style.

Later, they went to Nanjangud town by road, and then to Bandipur to enjoy Safari. They then returned to Mysuru and spend night in luxury train stationed overnight at Mysuru.

This morning, tourists had breakfast on-board and went out to visit the Mysore Palace in private bus. At Palace, they were taken inside and gave full description by Ramesh, a palace guide. Later, they will return to train to have lunch and leave for Srirangapatna at 3.30 pm. They will be taken to ruins of forts of Tipu Sultan, Sri Ranganathaswamy Temple and other tourist places.

Next journey from Mar. 21

The ‘Jewels of South’ (6 nights and 7 days) will take travellers on an epicurean journey from Bengaluru to Mysuru, Hampi, Mahabalipuram, Thanjavur, Chettinad, Kochi, Kumarakom and back to Bengaluru. It will begin from Mar. 21.

Launched in 2008 by KSTDC, the train was facing decreased patronage over the years and the occupancy rate was only 30 to 35 percent on an average. Added to the burden was the high haulage charge by the Indian Railways and the KSTDC was paying between Rs. 50 lakh and Rs. 55 lakh per trip as haulage charges to the Railways.

Now, the IRCTC has taken the train under its wings and all its 18 luxurious coaches have been given a makeover with new interiors at Ashokapuram Railway Workshop,  Mysuru.

Now the interiors are plusher and all the earlier furniture has been replaced. The vestibule (passage between the two coaches) has been made seamless all along the coaches and the train is packed with new attractions. Its iconic purple exterior has been retained and motif decoration has been made more meaningful by including Yakshagana Kirita (headgear). The yellow band running across the train will explain tourist monuments.