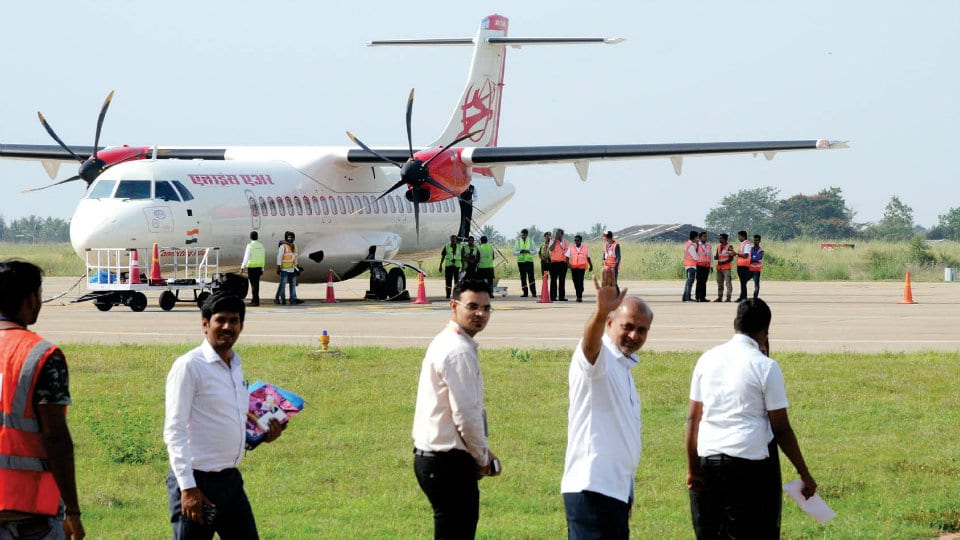 Mysuru: The introduction of Air India’s Alliance Air flight ‘Akasha Ambari’ between Bengaluru and Mysuru as part of Dasara celebrations has drawn a good response and if the demand continues the service will be continued, said Tourism Minister S.R. Mahesh.

He was addressing the media after giving send-off to the Dasara elephants by offering them puja at the Mysore Palace premises here yesterday and said that there was very good response to the special flight.

The fare was fixed at a low of Rs.999 (plus taxes) and hence the demand was high. If in the coming days the response is good, then the flights will be continued after discussion with the Chief Minister, he said.

The illumination of the city as part of the Dasara celebrations had continued two days after the Jumboo Savari on Saturday and Sunday. The decision to continue it for a couple of days will be taken after a discussion with the CM, he added.

‘Credit does not go to me alone’

Deputy Commissioner Abhiram G. Sankar, who is also the Dasara Special Officer, speaking on the occasion said that the Dasara celebrations with the cooperation of Ministers, officials and the public has gone off smoothly. For this everybody has joined hands and hence the success goes to all of them and not just me alone, he said.

There were many challenges we faced during the celebrations but we have overcome all of them successfully, he said.

More than 1,000 passengers flew in the Akasha Ambari flight introduced between Bengaluru’s Kempegowda International Airport and Mysore Airport in Mandakalli from Oct.10 to 20. The 72-seater aircraft would fly in the afternoon from Bengaluru and land in Mysuru and after half-an-hour stop return to  Bengaluru.

READ ALSO  Musings on MySugar: May the sugar be sweeter

The passengers were benefited a great deal as the fare was fixed at just Rs.999 and the remaining money was paid by the Tourism Department.

Tourism Minister gave publicity to the flight by first flying in it from Mysuru to Bengaluru. Earlier, Kannada and Culture Minister Jayamala had also flown to Bengaluru in the same aircraft.

Apart from this, Union Minister of Commerce and Civil Aviation Suresh Prabhu and his family had also come in Akasha Ambari on Vijayadashami Day to view the Jumboo Savari.

In all, more than 1,000 people flew in the last ten days which is a good sign, said Mahesh expressing happiness.

There was also a good response to the Open Top Bus from the public. The only open top bus in the BMTC (Bengaluru Metropolitan Transport Corporation) fleet was brought to Mysuru and suitably modified. The bus service was introduced on Oct. 10 and ended on Oct.21. The fare for the 32-seater bus was Rs.150 per seat.

There was more demand for the open top bus during the evenings to see the illumination of the city. After Chief Minister H.D. Kumaraswamy, Infosys Foundation Chairperson Sudha Murty, who inaugurated the Dasara celebrations, Ministers G.T. Devegowda and S.R. Mahesh travelled in the Open Top bus, the response increased.

ONE COMMENT ON THIS POST To “‘Akasha Ambari’ flights to continue depending on passenger demand: Tourism Minister”