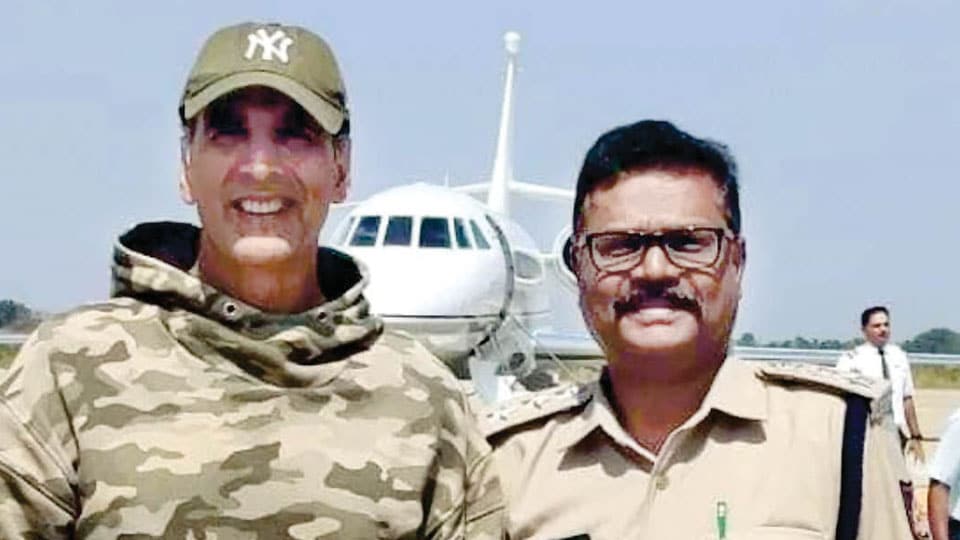 Mysuru/Mysore: Bollywood star Akshay Kumar, like Prime Minister Narendra Modi and superstar Rajinikanth before him, will soon be seen in an episode of Discovery’s show, Man Vs Wild, for which he will shoot inside the Bandipur Tiger Reserve.

The actor reached Mysore Airport from Mumbai in a special flight last evening and halted at a posh resort on the fringes of the Tiger Reserve.

The series, Man Vs Wild is hosted by British adventurer Bear Grylls who shot an episode with actor Rajinikanth on Tuesday. The Forest Department has issued permission for the shooting, which is expected to be completed by today evening. Last year, PM Modi featured in an episode which was shot  at Jim Corbett National Park in Uttarakhand.

Shooting between 10 am and 4 pm

Project Tiger Director, Bandipur Tiger Reserve T. Balachandra said the Department has given permission for shooting between 10 am and 4 pm today. The team will shoot at Tiger Road and two other places, he added. Most parts of the shooting will take place around Rampura elephant camp in Moolehole range, the sources added.

Officers said that the Bear Grylls’ team has to vacate the core area of the forest by 4 pm today and the actor is likely to fly to Mumbai either from Mysuru (connecting flight to Bengaluru as there is no direct flight to Mumbai) or reach Kempegowda International Airport in Bengaluru to take the Mumbai flight.

A report on Bollywood said, “Akshay Kumar makes for an ideal guest on Man Vs Wild. He is agile, energetic and quite fit as we all know. He can easily roam around in the difficult terrain of the forest and make for great company with Bear Grylls. Akshay hopes to learn the survival techniques from Bear. The British adventurer too hopes to imbibe some of his admirable qualities. We assure it’ll be an episode to watch out for!”

The show will be shot across 14 episodes, with the second and third episodes being shot at Bandipur. Balachandra informed that the shooting will take place without violating any conditions imposed by the Department like carrying inflammable materials, use of generator sets and other flashing equipment.

Sharing a photo of himself and Rajinikanth, host Grylls wrote on Twitter, “After our episode with Prime Minister @NarendraModi of India helped create a bit of TV history, (3.6 billion impressions), superstar @Rajinikanth joins me next, as he makes his TV debut on our new show #IntoTheWildWithBearGrylls on @DiscoveryIN. #ThalaivaOnDiscovery”

Discovery Channel also shared the tweet with the caption, “Continuing our tradition to host Iconic Indians, after @NarendraModi, we are delighted that @Rajinikanth, debuts on TV, joining @BearGrylls for #IntoTheWildWithBearGrylls and spread the message of water conservation. #ThalaivaOnDiscovery”

In his reply, Superstar Rajinikanth tweeted: “Thank you very much dear @BearGrylls for an unforgettable experience … love you. @DiscoveryIN thank you #IntoTheWildWithBearGrylls.

Rajinikanth said in a statement, “Into The Wild is a truly unique show- at one level, it offers adrenaline-pumping action, while at another, the show lends itself beautifully to driving a specific purpose for the larger good of society. So, when, officials from Discovery, a brand globally respected for offering inspiring real-life entertainment, approached me, I agreed to finally make my debut on TV after more than four decades of cinema. Kavithalayaa, the iconic Production House founded by my guru K. Balachander, also played a significant role.”

He added, “Bear Grylls has tested the survival skills of multiple celebrity guests, pushing them to their limits. I look forward to the survival challenge in the mesmerizing wilderness of India.”

The episode, featuring Rajinikanth, will focus on water conservation. Talking about the need to conserve water, Rajinikanth said, “Every Indian will need to come forward and contribute in conserving water. This war has to be led at all levels including government, community as well as on the individual front. I believe this show on Discovery is a perfect platform to take the message of conserving water at every home across the country.”

Host Bear Grylls said in a statement, “Our team is very excited to work closely with Thalaiva. Much more than a cine star, Rajinikanth is a phenomenon who has captivated audiences across the world with his work, on-screen and off-screen. He has always shown such energy and flair in all he does, and he will need that courage and determination again on our journey into the beautiful wilderness of India.”