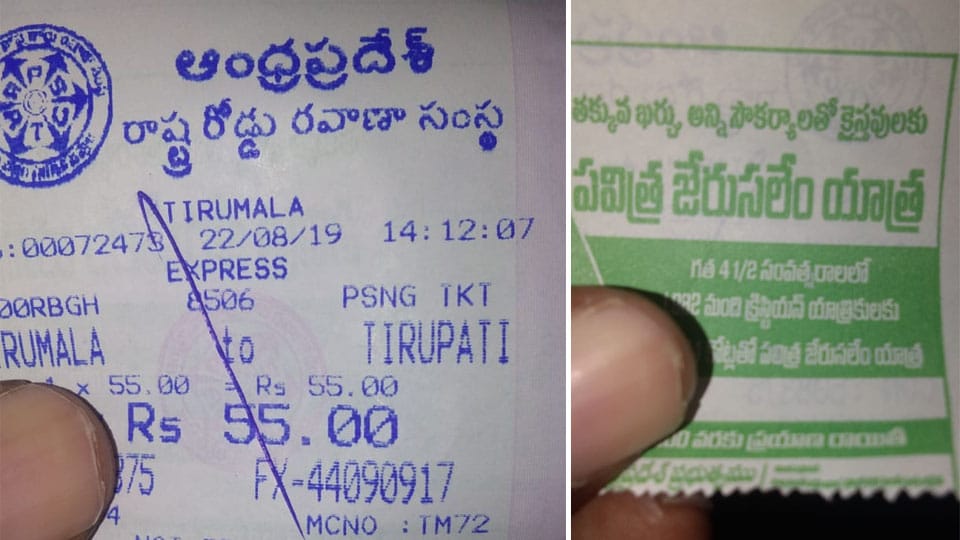 Tirupati: Devotees visiting the temple of Lord Venkateswara in Tirumala were on Thursday shocked on seeing advertisements pertaining to an alien faith printed on the back of the tickets issued by the Andhra Pradesh State Road Transport Corporation (APSRTC).

A few devotees travelling on the Tirumala-Tirupati route by an APSRTC bus were given a ticket that carried an advertisement by a Vijayawada-based travel agent, offering “special tariff” to Christians wishing to travel to Jerusalem and  Muslims for Haj.

Some devotees raised objection over the issue and wondered how “proselytisation” could be allowed on the Tirumala Hills. Though printing of the advertisement was initially viewed only as an act of negligence by the APSRTC, as the Corporation officials said that such tickets could have crept into the Tirumala route by oversight, there were a few who saw a “hidden agenda” to promote alien faiths on Tirumala.

Dharna staged: BJP leaders, led by its State Spokesperson G. Bhanuprakash Reddy, staged a dharna in front of the APSRTC Regional Office in Tirupati, demanding that action be taken against those responsible for it. The party leaders sought an explanation from Chief Ticketing Officer Madhusudhan on the controversy.

Squarely blaming the State Government, the BJP leaders said similar controversies had erupted when Y.S. Rajashekara Reddy was the Chief Minister of the combined State.

Reacting to the incident, Endowments Minister Vellampalli Srinivasa Rao passed the buck to the previous regime, stating that the tickets had been printed during the TDP rule after awarding contract at that time.

“Some political parties and a section of the media are bent on defaming our Government on trivial issues without understanding that they are hurting the sentiment of the devotees. Tickets that are meant for Nellore depot have been sent to the Tirupati depot, and action will be taken on those responsible for it,” the Minister said. The APSRTC uses the back portion of tickets for carrying advertisements, especially on various Government schemes.

READ ALSO  Jagan Reddy to have not one, not two but five Deputy CMs !

“The Ticket Issuing Machine (TIM) rolls supplied by the Nellore zonal stores carried advertisements issued by the Department of Minorities Welfare in the previous TDP Government, which inadvertently reached Tirumala. After it became an issue, we have stopped using the rolls and ordered a probe on how they reached the Tirumala depot,” APSRTC Regional Manager (Tirupati) T. Chengal Reddy said.