Home » News » All works must be completed before Dasara-2019: GTD 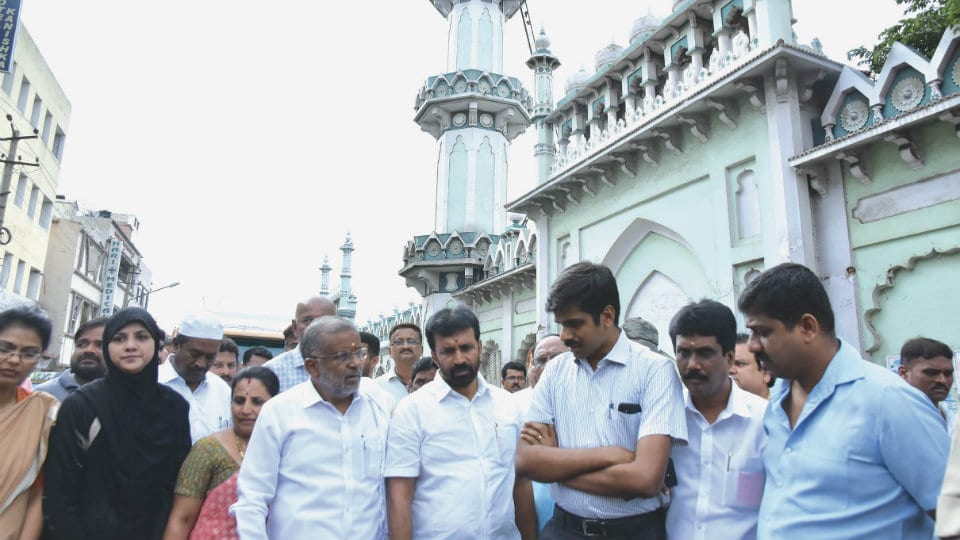 All works must be completed before Dasara-2019: GTD

Mysuru: District In-Charge Minister G.T. Devegowda (GTD) said that all development works will get over much ahead of the Dasara festivities. Reviewing the progress of the ongoing works, including the widening of Irwin Road yesterday, he directed the authorities to ensure that the work was completed before the curtains went up on Dasara-2019.

The Minister claimed he brought Minister for Public Works H.D. Revanna and senior bureaucrats to Mysuru recently, to ensure that public works were implemented faster.

GTD, who was on a whirlwind tour of the city since Tuesday, continued his tour yesterday at Chamaraja Constituency. He first reached BN (Bengaluru-Nilgiri) Road along with MLA L. Nagendra and other officials and saw how the iron barricades placed as medians were marring the beauty of the road.

Mysuru City Corporation (MCC) Superintending Engineer Mahesh apprised the Minister about the issues and said that the iron barricades will be removed and steel medians will be installed. The open drain that runs across the road will be covered with slabs and the footpath will be elevated and converted into a walking path after the lawn is laid. GTD, on listening to the plan, immediately asked the MCC to go ahead and beautify the road.

The next issue on the road was the Taxi Stand opposite Suburban Bus Stand. The lease of the parking lot had expired but the taxis continued to park there. Devegowda asked the officials to get the place vacated but not before providing an alternate space.

An inspection of public lavatories at the Karnataka State Road Transport Corporation (KSRTC) Sub-Urban bus terminal shocked the Minister. It was evident that the public facility had not been cleaned for a considerably long time and sewage from a drain was allowed to flow into the lavatory.

A visibly upset Devegowda directed Mysuru DC Abhiram G. Sankar to suspend the official charged with maintaining cleanliness at the terminal, besides instructing authorities concerned to prevent sewage from flowing into the toilets.

The Minister subsequently asked the officials to prepare a Detailed Project Report (DPR) for the proposed multi-level parking facility near the KSRTC Bus Stand. He also asked them to study the possibility of widening the two-lane road from Chatri Mara to Government Guest House, and developing Freedom Fighters Park on Narayana Shastri Road. “The reports for these proposals must be submitted in a week’s time,” Devegowda told the officials.

The team then left in mini buses towards Chamaraja Double Road and also visited B.B. Keri where there are lot of drainage problems. He asked the officials concerned to immediately attend to the problem. Then the team moved towards Kumbarakoppal where the residents gathered to show the Minister the sad condition of the bus shelter. He assured them that the shelter would be demolished and a new one built in its place.

Then his attention was drawn towards the encroachment of the storm water drain and he directed Tahsildar T. Ramesh Babu to take action within a week.

GTD then visited the District Hospital that is being constructed at Metagalli at an estimated cost of Rs. 64 crore. District Surgeon Dr. B. Basavaraj explained about various features of the building and said that the construction will be completed within a month.

He also asked for the vacant land where an industry was located earlier to be handed over to them. The Minister directed the officials to look into the matter and see whether the land could be handed over.

Meanwhile, the residents of Loknayaknagar in Metagalli, mostly women met GTD and demanded that the mortuary that had been built inside the Hospital premises be shifted as there were children and elders who would be affected by the mortuary. Devegowda promised to see that he would try his best to attend to their plea and get the mortuary shifted to the other side of the hospital.

After inspecting BN Road, GTD reached Irwin Road where the much-delayed road widening is going on at a slow pace. He asked the officials to speed up the process of demolishing a portion of the historic Jumma Masjid. He directed the MCC Assistant Commissioner Geetha Udeda to discuss the issue with A.B. Ibrahim, Administrator, Karnataka State Wakf Board and come to a speedy conclusion. She told him that Mayor Pushpalatha Jagannath, MCC Commissioner Shilpa Nag and she had met Ibrahim in Bengaluru last week and he told the MCC that the Wakf Board does not want the compensation money but it should build similar dome structure and minarets and also provide land in some other area to compensate the loss of land. GTD told reporters that the city was growing faster and the pace of development was expected to double as Mysuru and Bengaluru are being linked with a 10-lane highway. “Bengaluru is getting saturated and there is ample scope for Mysuru to grow. Mysuru should not go the Bengaluru way. We need to emphasise on the city’s growth in accordance with the foundation laid by the erstwhile Maharajas,” he said.