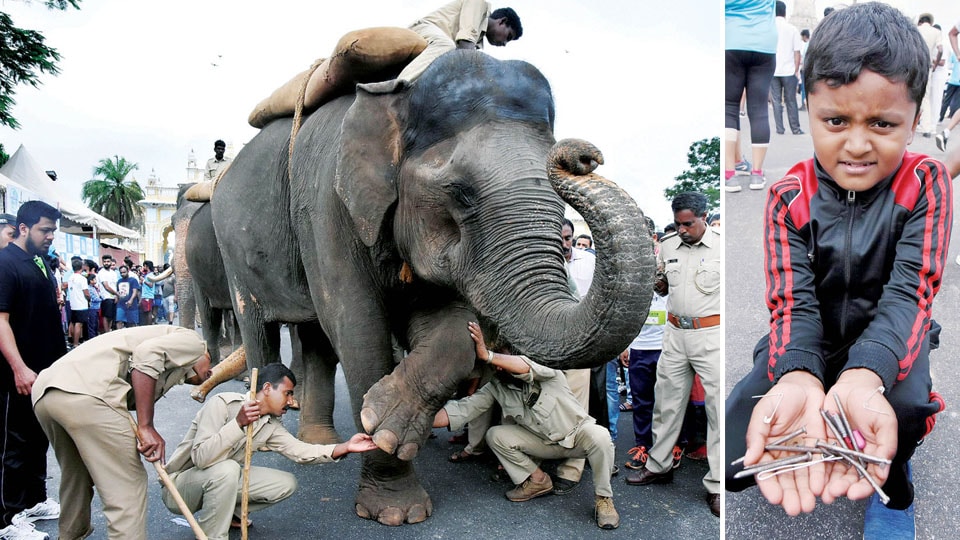 Mysuru:  Sheer carelessness on the part of elephant caretakers and people who left behind sharp nails, safety pins on the road led to an unfortunate incident this morning where the left foreleg of jumbo Cauvery was pierced by two nails. The incident occurred at a time when the Dasara — where caparisoned elephants are the main attraction — inauguration is just seven days away.

Today morning, as part of their daily practice session, the 12 Dasara elephants were taken on a routine five-kilometre march from the Mysore Palace till Bannimantap. As the elephant team marched out of the Balarama Gate near the Kote Anjaneyaswamy Temple at around 7.25 am, jumbo Cauvery that was second in the line suddenly stopped walking.

Sensing something amiss and due to the sudden jerk, Cauvery’s Mahout asked his team members on the road to check the elephant. Other Mahouts prodded the jumbo to lift its left foreleg and found two nails pierced into the soft skin. The nails were pulled out and medication was applied. Fortunately, blood did not ooze out of the wound. After the nails were removed, the march resumed.

Equipment did not pick up nails

Surprisingly, the automated magnetic nail removal equipment fixed into a vehicle that moves ahead of elephants on the Jumboo Savari route did not pick up the nails, raising questions on its efficiency. Today being a Sunday, a large number of people had gathered at the Balarama Gate to witness the elephant march. As the news of nails piercing Cauvery spread, people started looking for sharp objects in the area and found at least a handful of nails, safety pins and hairpins.

As it is Dasara season, a series of events are organised near the Kote Anjaneyaswamy Temple where event organisers and workers erect tents, shamiyanas, hoardings and German tents. While pitching tents, workers carelessly leave behind nails on the road and they are not cleaned later.

“We found at least 30 nails, safety pins and other sharp objects. Event organisers must be careful and the objects must be removed as elephants pass on this route and they tend to get hurt. The wounds, if not treated, will aggravate with puss formation. Even we human beings are at risk,” said Vignesh, who spotted at least five big nails near the Balarama Gate.

Though the Forest Department officials admitted that jumbo Cauvery was pierced, they said that it was a minor incident. “When mahouts brushed their hands on the sole of the jumbo (sole of an elephant foot), they felt the nails. They were immediately plucked out and medication was applied. We will be more careful henceforth and will ensure such incidents do not recur,” said veterinarian Dr. D.N. Nagaraju who is looking after the health of Dasara elephants.

When asked why the automated magnetic nail removal equipment failed to pick up the nails, he said that the equipment, fixed on a jeep, moves in a particular route. “The equipment is five-feet long and while it has a designated way of moving at one level, elephants do not walk straight and they tend to sway as they walk. Cauvery could have walked beyond the five feet covered by the magnetic equipment,” he added.

Reacting on the incident, Deputy Conservator of Forests (Wildlife) Alexander said that it was a minor issue. “Even in forests, elephants get pierced by bamboo thorns and other sharp wood. This is a minor incident and we have removed the nails from Cauvery’s sole. I have instructed the staff to be extra cautious,” he said.