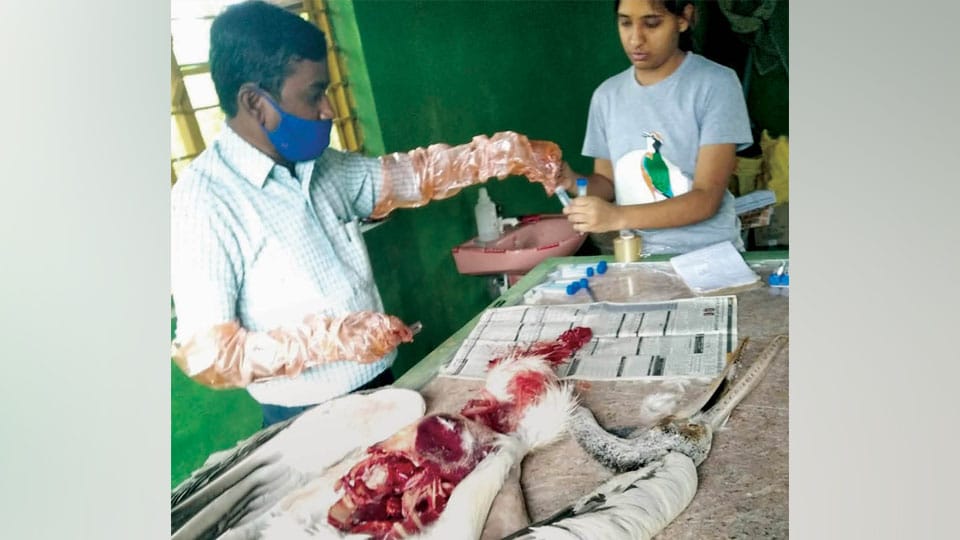 Viscera of dead birds sent to labs for tests

Bharathinagar (Mandya): Amidst the prevailing H5N8 or avian influenza (bird flu) scare, mysterious deaths of migratory Spot-Billed Pelican is continuing to haunt Kokkare Bellur on the banks of River Shimsha in Mandya district.

From November — the arrival of Pelicans — till now, over 6 birds have been found dead. Last year, when the bird flu was at its peak in Mysuru district, over 125 Pelicans were found dead at Kokkare Bellur. Latest bird deaths have worried veterinary doctors and Kokkare Bellur villagers alike.

Though the exact reason for the deaths has not been determined, post-mortem has been conducted and viscera of the dead pelicans have been sent to Institute of Animal Health and Veterinary Biologicals, Bengaluru and Indian Veterinary Research Institute at Bareilly in Uttar Pradesh. Samples have also been sent to Salim Ali Centre for Ornithology and Natural History (SACON) at Coimbatore in Tamil Nadu.

Water samples from the Kokkare Bellur Lake and also from nine other lakes in the surroundings where the birds nest and breed have been collected and tests have revealed that the water is not polluted and fit for birds to consume. The lakes are Gurudevarahallikere, Soolekere, Madarahallikere, Garakahallikere, Maddurkere, Thailurkere, and Koodlurukere, Malurkere and Sullerikere.

Yesterday, Tahsildar Vijayakumar and veterinarians Dr. Satish, Dr. Hanumegowda and Dr. Krishnappa visited Kokkare Bellur and took stock of the situation. Interacting with villagers, the officers told them to report any deaths or even unusual behaviour of the birds including droopiness. They, however, denied that there was bird flu in the area. It was prudent to wait for the test results before drawing any conclusions, they added.

Villagers, who have a symbiotic relationship with Pelicans and Storks, told the Tahsildar and the doctors that it was heart-rending to see healthy birds dropping dead. Doctors told the villagers that birds do not have a fixed eating practices and sometimes worms in the belly cause deaths. Along with samples of water, samples of food were collected from the nearby areas and ponds to ascertain the cause of death.