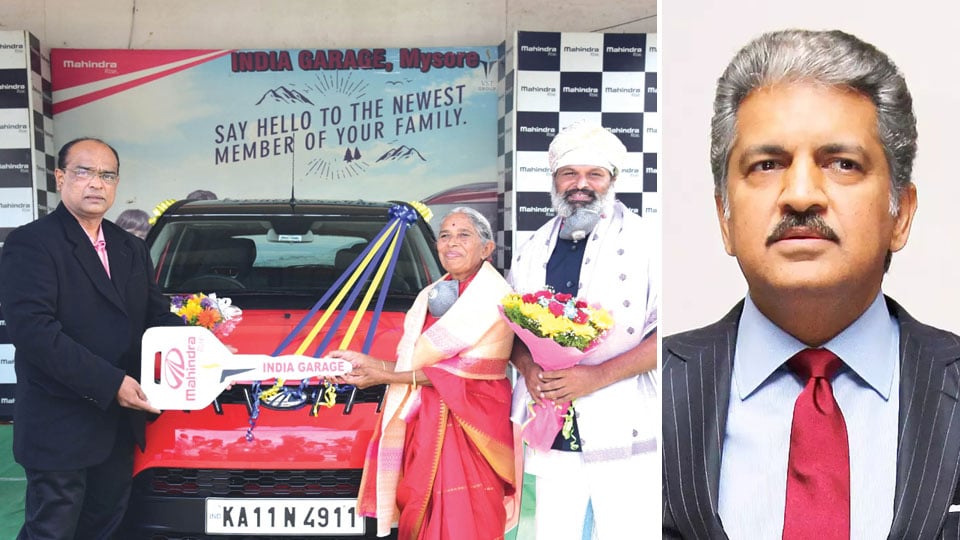 Mysore/Mysuru: ‘Promises are meant to be broken’ goes a saying. But for Anand Mahindra, Chairman of Mahindra and Mahindra Group, promises are to be kept and fulfilled.

As per his promise, he has delivered a vehicle to city’s Dakshinamurthy Krishna Kumar who has successfully taken his 70-year-old mother Choodarathna on a Bharat Darshan Yatra or Mathru Seva Sankalpa Yatra on a 2000-model scooter.

After a two-year-eight-month pan India temple run on a scooter and covering 56,522 kilometres through four countries Dakshinamurthy Krishna Kumar and his mother Choodarathna returned to their house at Bogadi on Sept. 16. In the course of their spiritual sojourn, the mother-son duo travelled across India and even visited Nepal, Bhutan, Bangladesh and Myanmar.

The mother and son duo started their journey on Jan. 16, 2018. Their journey had caught the attention of Anand Mahindra who had tweeted months ago that he will gift a Mahindra KUV 100 NXT. As per the promise, the vehicle, worth more than Rs. 9 lakh, was delivered to Krishna Kumar.

The mother-son duo was asked to visit the Mahindra showroom at Hinkal. Choodarathna and Krishna Kumar were received well and honoured before handing over the keys of the vehicle registered as KA-11-N-4911.

The keys of the SUV were handed over by showroom General Manager K. Sukeerthi. So far, the vehicle was not handed over as the mother-son duo was on a transit and also due to COVID-19.

“Krishna Kumar and his mother were travelling when Anand Mahindra tweeted that he would gift the vehicle. We waited for him to come to Mysuru. We registered the vehicle in Mandya as Krishna Kumar hails from Srirangapatna though they are settled at Bogadi in Mysuru,” Sukeerthi told Star of Mysore.

Accepting the vehicle, Krishna Kumar said that he was humbled by the gift. “This gesture is noble and I have never expected. I would like to call Anand Mahindra as the king among gift-givers. May God give him more strength to serve the humanity and gift more and more,” he said.