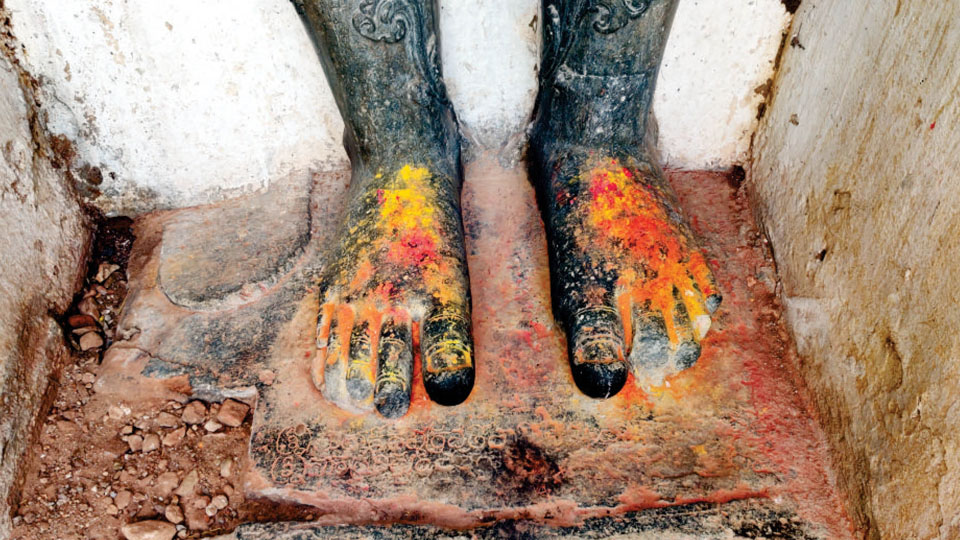 Mysore/Mysuru: An ancient Jain inscription of the 11th – 12th century has been discovered along the pedestal of Lord Bahubali statue at Basadi Hoskote village, Krishnarajapet (K.R. Pet) Taluk in Mandya district.

Several mantaps, statues and idols related to Jain culture have been excavated in the region in the past. Hosakote which was once a huge village lost its importance after the Kannambadi Katte (Krishna Raja Sagar Dam) was constructed.

H.P. Nitin, Associate Director – Marketing Technology and Digital at Wipro, who is also the Founder and the Executive Director of www.jainheritagecentres.com  (JHC) found this during his fieldwork recently. The two-line inscription found in front of the feet of Lord Bahubali is worn out intermittently.

The summary of the inscription informs that Sripala Traividyadeva Muni was like an emperor among the ascetics and a champion of debates. One of his disciples got this statue of Lord Bahubali made.

According to Nitin, based on the inscriptional text it can be concluded that it belongs to the 11th to 12th century AD. One of the inscriptions found on a Manastambha (not seen now) in the vicinity belongs to the period of Narasimha-I (1165 AD), the successor of Hoysala king Vishnuvardhana.

The other inscription mentions that Punasimmaiah, Vishnuvardhana’s general, had built a Basadi/temple and had made donations for its maintenance. Based on these available pieces of evidence and the newly discovered inscription, it can be concluded that this Bahubali statue was installed during the 11th to 12th century AD, he said.

“Though scholars have opined that it was Puna-simmaiah who had got the idol of Lord Bahubali at Basadi Hoskote installed there is no written evidence to prove this. Hence more research in this regard is required to unearth the facts,” Nitin said.

Nitin has thanked Dr. Ravikumar K. Navalagunda (Harihara) for his guidance and help in deciphering the inscriptional text, his father Dr. H.A. Parshwanath, N. Prasanna Kumar of Mysuru and Sandesh Jain of Bengaluru.

Nitin holds a bachelor of engineering degree in Mechanical Engineering from the University of Mysore. His first book ‘Jinayatra’, a collection of research articles on Karnataka’s Jain Heritage was published in Feb. 2018. It has won the coveted M.A. Jayachandra Award. Nitin can be contacted on Mob: 98808-18869 or [email protected]