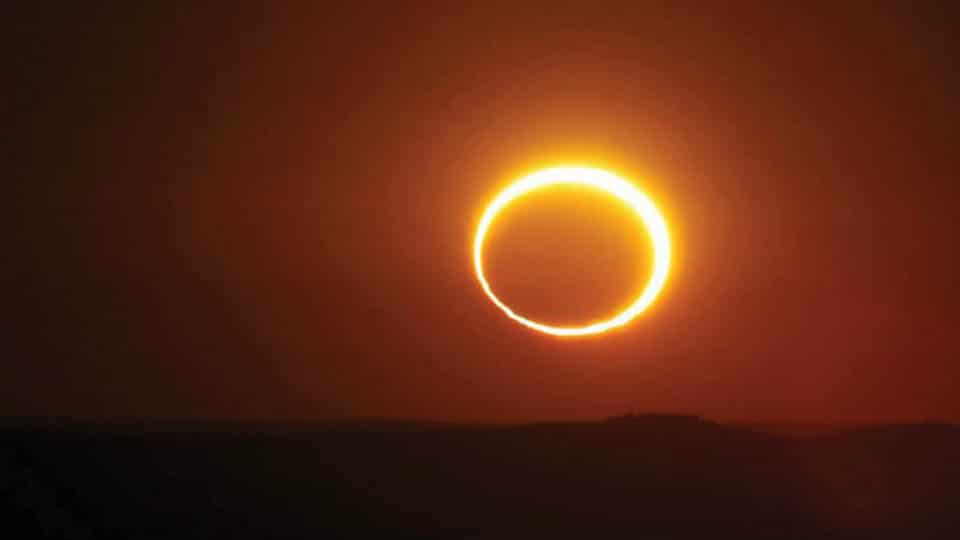 Mysuru: Kaimaani, a remote village in Kutta, South Kodagu, is all set to witness the rare Annular Solar Eclipse on Dec. 26 — the third and final solar eclipse of the year 2019. The Mysore Science Foundation (MSF) is organising a sky-gazing event at Kutta where nearly 2,000 children and general public will witness the spectacular event.

In the Annular Solar Eclipse, Moon does not completely obscure the Sun as the Moon is farther away from us than normal, making it appear smaller. As a result, the Sun is not totally eclipsed, leaving a ‘Ring of Fire’ around the edges.

Speaking to Star of Mysore, G.B. Santosh Kumar of Mysore Science Foundation, said that Kutta falls on the Solar Path and as such, the visibility is clear. The visibility of Annular Solar Eclipse in Mysuru is only 75 percent.

“Mangala in Gundlupet, Coimbatore in Tamil Nadu, Udupi in Dakshina Kannada and Kutta in South Kodagu fall on the Solar Path where there is a clear visibility.

“We did not get permission from the Forest Department for the event as Mangala falls under the limits of Bandipur Tiger Reserve. And 2,000-strong crowd going to Coimbatore and Udupi was a distant possibility. As such, we have zeroed in on Kutta where the event can be viewed from 8 am to 11 am,” Santhosh said.

At Kutta, the event will be organised at the newly-developed coffee drying yard of Kolera Ravi Cariappa in Kaimaani village. “The place is by the side of the road and the land is in a higher altitude and there is an arecanut plantation below. This is a perfect location for witnessing the once-in-a-lifetime event,” said Kotrangada Somaiah, a teacher at Manchalli Government School, who played a key role in identifying the location for the organisers.

“People from Mitee Pune contacted me two months back and requested me to find out an ideal place in Kutta to view the event. First we considered the Government Higher Primary School Cinkona in Kutta for the event but had to cancel it as the approach road was not good. The Kaimaani coffee yard is a perfect location as it is by the side of the road. There are facilities including toilets and I have requested the local residents to allow children to use their toilets,” said Somaiah.

The event organisers have already registered in the India Book of Records for the largest gathering of children in one place to view Annular Solar Eclipse. “On Dec.17, the Mysore Science Foundation will organise another programme called “Video Viewing” where students will be seeing eclipse-related videos to prepare them for the main event. For the actual event on Dec.26, we are expecting students from Maharashtra, Tamil Nadu and Kerala,”                                                Santhosh added.

On that day, occurrence of eclipses, types of eclipse, science behind eclipse, myths and misconceptions, eclipse watching and safety shall be explained in addition to demonstration on pressure variation and temperature variation.

For outstation students coming from Maharashtra, Kerala and Tamil Nadu, choultries have been booked in Virajpet for their food and accommodation. “Along with them, students from Mysuru, Bengaluru and Kodagu too are participating in the event,” Santhosh said.

On the student selection process, the Mysore Science Foundation had communicated to schools to send 10 children who are interested in astronomy and a teacher. Registrations were on first-come-first-serve basis and we have kept last-minute registrations open as we are aiming for India Book of Records, he added.