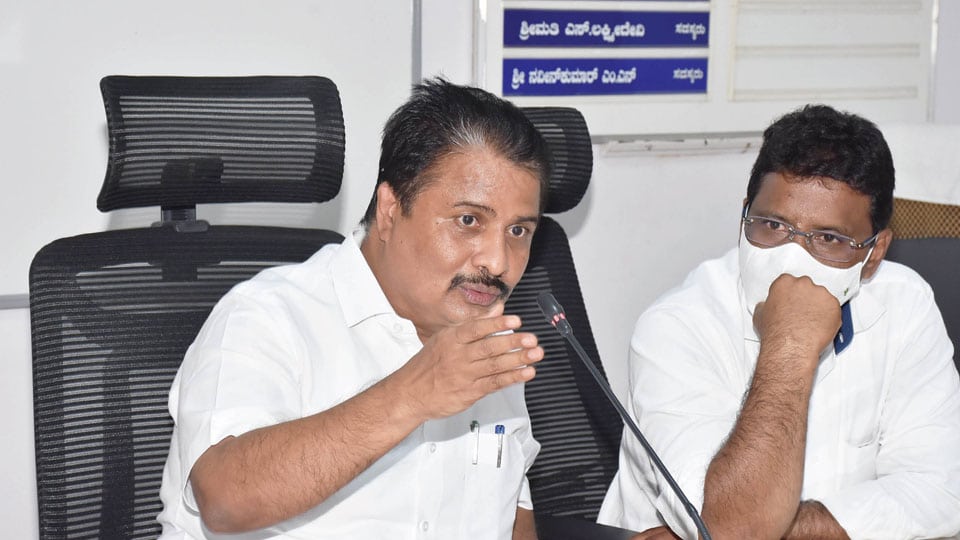 Mysore/Mysuru: Two persons have been arrested by City Police on charges of cheating people worth crores of rupees by promising them to get the Mysuru Urban Development Authority (MUDA) sites at cheap rate in city.

Most of the victims were advocates, doctors, software engineers and teachers.

Sharing this information with media persons here on Thursday, MUDA Chairman H.V. Rajeev said that this case has surfaced at a time when another case of cheating a person by furnishing fake documents of a site was still fresh in the minds of people.

In latest case, the accused have been identified as 31-year-old Sagar Deshpande, son of Arun Deshpande, a resident of Kanakadasanagar in Dattagalli, and an owner of a restaurant, and 25-year-old B.S. Myna of T.K. Layout. The duo had cheated over 20 persons by promising them to get the MUDA sites allotted to them. The Police have seized fake letterheads of MUDA from them.

The MUDA Chairman said that the people came to know that they have been cheated by the duo after they showed the site allotment letters to the MUDA who confirmed it as ‘fake’.

Based on the complaint filed  by G. Kavitha and Madina Asghar Nadaf, both residents of Madhuvanahalli Block in K.R. Nagar, the Saraswathipuram Police  arrested Sagar Deshpande and Myna on Dec. 11, 2020 and booked a case.

The complainant, Kavitha works as teacher in Government School, Bherya. On Feb. 14, 2020, her neighbour, Madina Asghar Nadaf told Kavitha that she had given Rs. 2 lakh advance to Sagar Deshpande seeking a site in R.T. Nagar in city. Five days later, both of them went to his office, Trident Academy in T.K. Layout. Kavitha expressed her wish to buy a site measuring 40ft X 60ft . The accused told her that the site will cost Rs. 28 lakh and asked her to pay an advance of Rs. 4,70,580. He further said that Myna, his associate would give further details about site. Kavitha paid Rs. 9,41,160 as advance money to buy two sites. She was given the receipt for the received amount.

On Sept. 21, Kavitha received a letter through registered post and showed it to the MUDA officials only to be informed that the letter had not been dispatched from their office. The mobile phone of Sagar Deshpande was switched off and he was not found in office too. However, she saw around 25 persons present at the office and came to know that even they too had been cheated by duo. She charged Deshpande and Myna of cheating the public by showing fake documents to gullible people, Rajeev explained.

He said that 150 cheating cases related to site allotment have been pending before the Corps of Detectives (CoD) for last so many years. The MUDA would be having documents only for the sites allotted by them. But, the CoD sleuths were asking for documents in connection with 150 cases which were not in MUDA as the sites were non-existent. This had delayed further probe into the site scam.

MUDA Commissioner Dr. D.B. Natesh said that cases pertaining to allotment cancellation and subsequent taking over of sites but sold with fake documents, are pending probe by the Cops. Steps have been taken to check the sale of sites by creating fake documents, he added.

3 COMMENTS ON THIS POST To “Another MUDA site scam”