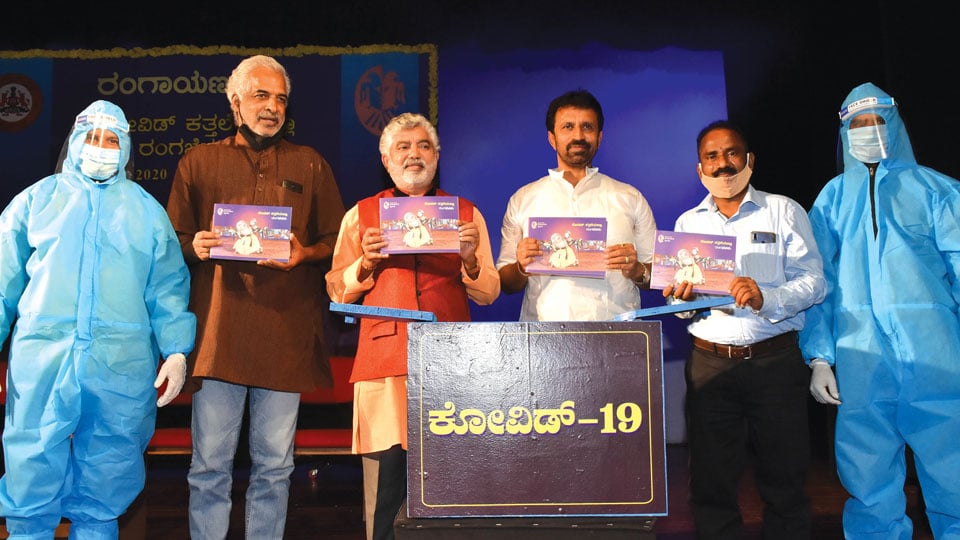 Mysore/Mysuru: In a COVID-19 world where theatre performances have been forced to migrate online to survive, artistes have found creative ways to adapt.  While many opt for the more tech-friendly live reading or monologue options, others go the extra mile to present theatre with a solid cast, complete with music and costumes, providing wholesome entertainment to theatre buffs.

The launch of a book ‘COVID Kattaleyalloo Rangabelaku’ (the light of theatre amidst COVID darkness) at Rangayana on Thursday evening saw an attractive performance of theatre artistes. The book that highlights the initiatives and activities of Rangayana during the lockdown and the pandemic, was released by MLA L. Nagendra.

Hand-held instruments like the flute, jagate, shanku, small drums were used by the performers from Bharathiya Ranga Shikshana Kendra instead of a complete ensemble of music to create a magical performance to folk songs. They sang and danced to their heart’s content while at the same time entertained the audience.

Later, ‘Raaga Saraga’ that was the imaginative concept of ‘Ranga Bheeshma’ B.V. Karanth introduced 30 years ago was presented in a new form that was directed by artiste Digvijaya. Rangayana artiste Dhananjaya and team performed to a song written by Kannada poet D.V. Gundappa.

‘COVID Kattaleyalloo Rangabelaku’ book was released in a unique way where a wooden box was brought to the stage on a wheel chair by two artistes dressed in PPE kits. The MLA and other dignitaries opened the box to release the book.

“I am aware of the fact that Rangayana has asked the Government to release a grant of Rs. 50 lakh to bring ‘Parva’ on stage. The Government will release the amount and I will make honest efforts to get the grants. Dr. Bhyrappa is in the hearts of every Kannadiga and bringing his works to theatre will bring them closer to people,” he said.

Rangayana Director Addanda C. Cariappa said that once ‘Parva’ is adapted into a play it will be shown across the State and even a film is being made on the process of converting ‘Parva’ into a play, he said.

“The estimated expense is Rs. 50 lakh and if the Government does not release the money, we will raise donations as Dr. Bhyrappa has lakhs of admirers across geographies,” Cariappa said.

Outlining Rangayana activities during the pandemic, Cariappa said that Rangayana will launch a new initiative ‘Raga Rangayana’ featuring different genres of music which will be held on the first Saturday of every month.

Like weekend theatre show, the music programme will be a permanent feature but only on the first Saturday of every month, he said.