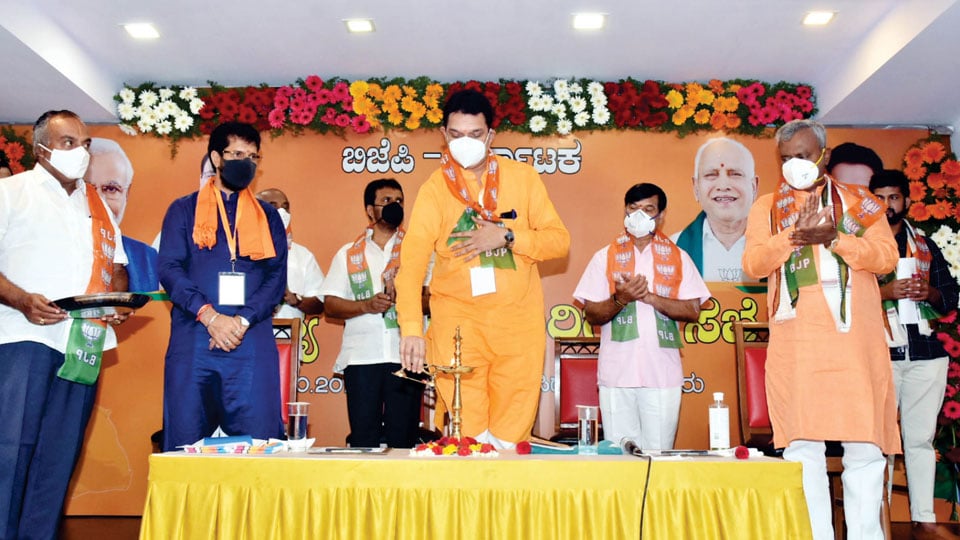 Mysore/Mysuru: The day-long meeting of State-level party office-bearers of the BJP began at Hotel President on B.N. Road here this morning.

Speaking after inaugurating the meeting, State BJP Chief Nalin Kumar Kateel, also an MP, said that the party is gearing up for Sira and  R.R. Nagar Assembly Constituencies scheduled to take place on Nov. 3 and the election to the four Legislative Council seats from Teacher and Graduate Constituencies on Oct. 28.

Expressing confidence that the party will win all six seats by a comfortable margin, Kateel said that this is first State-level meeting of the new office-bearers and it is happy to note that this meeting is taking place in Mysuru, with the blessings of Goddess Chamundeshwari.

Explaining the agenda of the meeting, Kateel said that with Gram Panchayat polls round the corner, the party leaders must focus on further strengthening of the party at the grassroot level. Asserting that the BJP’s next target is to win a maximum in the next Assembly polls, he said that the party will carry forward the legacy left behind by tall leaders.

Lashing out at the Congress for unfairly targeting the BJP on many fronts, Kateel questioned the very foundation of the Congress, which he said could not save the house of a party (Congress) Legislator in Bengaluru from being burnt allegedly by fellow Congress leaders. Maintaining that the Congress has no face to contest the polls in the backdrop of its dubious deeds, Kateel said that at the same time, the BJP will campaign by highlighting the achievements of the Central and State Governments.

READ ALSO  BJP will benefit from coalition's lack of dharma

Pointing out that party workers visited 1.68 crore homes and distributed food packets to 68 lakh families in the State during COVID-19 crisis, Kateel said that this has been taken note by the voters, who are going to elect BJP candidates in the by-polls.

BJP National General Secretary C.T. Ravi in his address, said that the party organisation during the COVID-19 critical period is going on with the motto- ‘Life and Living’.

Reminding that today (Oct.15) is the birth anniversary of former President of India Dr. Abdul Kalam, Ravi said that the great personality’s life and writings will remain inspirational for all ages and times. Recalling the contribution of erstwhile Mysuru Maharaja Nalwadi Krishnaraja Wadiyar to Mysuru and the State, he said that his administration remains etched in the minds of the people for generations.

Coming down heavily against the Congress, Ravi said that the party, which has been voted out of power is now banking on its three point agenda — obstruct, cause delays and mislead people — for returning to power. Maintaining that PM Modi has ensured that even the last paise in a rupee reaches the targeted beneficiaries of various Government schemes, he said that the time has come for a change and now the PM was doing exactly that by removing all hurdles in the implementation of Government schemes.

Noting that One Nation-One Ration Card is a game changer on the food front, he said that likewise, the NEP (National Education Policy) is another revolutionary idea, aimed at bringing change in education system for the better.

Dismissing the Opposition charges that the Centre is anti-farmer, Ravi wondered whether stopping black-marketeering in the distribution of fertilizers and putting an end to the menace of middlemen in farm purchases was anti-farmer.

He further said that the Congress has no moral right to question the BJP on Democracy, as the Congress has seen only one National President for over two decades. He expressed confidence that the BJP would win both the R.R. Nagar and Sira Assembly segments in the by-polls.