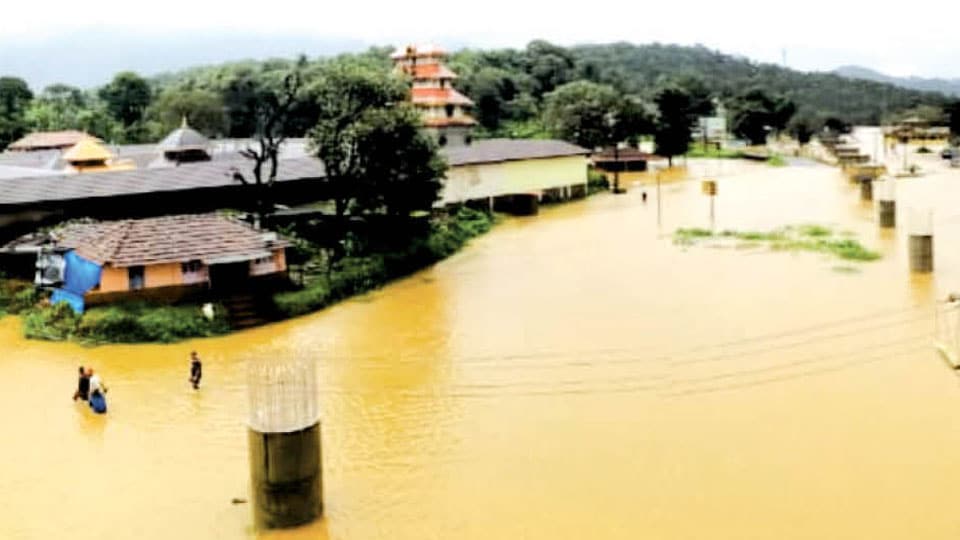 August rain in Kodagu due to global warming: IISc. Scientist

Kushalnagar: The earlier May-June-July monsoon in Kodagu has been delayed and rains are occurring only in the month of August-September since the last two years — and continuing this year — due to global warming and where changes to climate are happening, said Dr. T.V. Ramachandra, Coordinator, Energy and Wetlands Research Group (Centre for Ecological Sciences) at the Indian Institute of Science (IISc.), Bengaluru.

Responding to an e-mail query from Star of Mysore, Dr. Ramachandra, who has done extensive research in Kodagu during the last two years of floods and landslides, said that the global warming and climate change have resulted in the reduction in number of rainy days. The amount of rain — quantum —which is supposed to spread for 35-45 days is coming in 5-10 days, he said. “Deforestation is one of the major causal factor of  global warming, which not only increases the  emissions (carbon footprint) but also reduces the water retention capability of  catchments/ watersheds and also increases the instances of  land/ mud slide as the region has become fragile with the loss of soil binding capacity of roots (of trees),” Dr. Ramachandra said.

“Water is supposed to flow slowly (allowing infiltration or percolation) but with the removal of vegetation cover, water rushes towards the downstream leading to loss of life and property. We need to wakeup now or else pay heavy price. Let us manage land resources scientifically and make sure greedy decision makers do not take advantage of common man’s ignorance,” he added.

It may be mentioned here that in a study titled ‘Visualisation of impacts due to the proposed developmental projects in the ecologically fragile regions of Kodagu district’ published in ‘Progress in Disaster Science’ journal, Dr. Ramachandra and his team had said that over 66,892 hectares of pristine forest cover was lost in Kodagu due to un-interrupted exploitation. Kushalnagar and Madikeri taluks have lost the major chunk of forests due to construction of roads, home stays and villas.

“Kodagu forests sustain water and forms lifeline for Karnataka, Tamil Nadu and Kerala. Drastic land use changes will threaten the water security and people’s livelihood. The region is part of the central Western Ghats with the exceptional biodiversity. The expansion or new construction would result in irreversible ecological degradation,” the study said.

Projects such as major roads and Railway lines should not be allowed, even if they are essential from the perspective of highly influential section of society. The region is intrinsically fragile with steep slopes and sharp gradients and small disturbances will lead to catastrophe. Deforestation needs to be arrested immediately, the scientists mentioned.

Dr. Ramachandra said that deforestation process in the district was evident from the loss of forest cover from 40% (1973) to 24% (2018). Kodagu landscape is ecologically fragile and need to maintain the structure of the landscape to ensure its capability, ecological functions including structural stability.

No major damage this year

Meanwhile, noted Geologist and retired Deputy Director, Geological Survey of India Dr. H.S.M. Prakash said that this year, there is no major indication of massive destruction due to floods and landslides like it happened in 2018 and 2019. “Scientific studies and geological examinations say that this year there will be no major landslides or a cloud-burst-like situation. There is also no indication of earth cracking up from below causing it to crash,” he said.  If at all destruction has to take place in August this year, it will be only minimum, as low as 2%. “Scientists and geologists base their data on evidence and studies conducted on earth and its crust. I had predicted that there might be landslides in 2019 as there were indications. Likewise, landslides occurred in Kodagu but were not as severe as in 2018. Our observations are only indicative but we cannot predict 100%,” he said.

“This year, there are no indications of earthquakes in Kodagu or Karnataka. But such signs are visible in Delhi, Haryana, Himachal Pradesh and Uttar Pradesh,” he added.

2 COMMENTS ON THIS POST To “August rain in Kodagu due to global warming: IISc. Scientist”