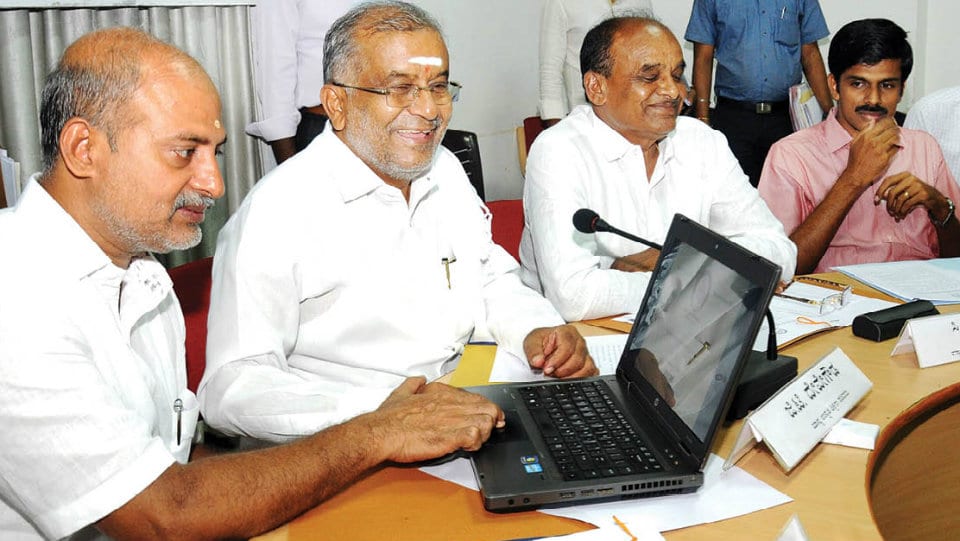 Mysuru: Mysuru District Minister G.T. Devegowda (GTD) had to face some embarrassing moments at the Dasara Executive Committee meeting that was held at the Deputy Commissioner’s Office this morning when Chamarajanagar District Minister C. Puttaranga Shetty from Congress, who is also a member of the Committee, staged a walk out alleging that the JD(S) was dominating the meeting and Dasara festivities.

As soon as the poster for the Dasara celebrations was released by GTD and Tourism Minister S.R. Mahesh, Puttaranga Shetty took objection that his photo and name were missing from the poster and the invitation.

The Dasara Executive Committee is next powerful after the Dasara High-Powered Committee that is chaired by the Chief Minister. The Executive

Committee is usually headed by Mysuru District Minister and it will have one Vice President.

For last year’s Dasara celebrations, the then District Minster Dr. H.C. Mahadevappa was the Executive Committee Chairman. Usually, the Chamarajanagar District Minister is the   Vice-President.

This year, however, S.R. Mahesh from Mysuru was appointed as the Vice-President and this irked Puttaranga Shetty.

Puttaranga Shetty openly questioned GTD as to why his name and photo were missing on the poster and the invitation and why was he not appointed as the Vice-President as per norm. He alleged that JD(S) members and Ministers were dominating the Dasara events and Congress Ministers were sidelined.

Even as GTD rose to intervene and pacify an agitated Puttaranga Shetty, the latter walked out in a huff. Later, speaking to reporters, he said that the JD(S) was neglecting its coalition partner Congress. “We are being sidelined and I will bring this to the notice of former Chief Minister Siddharamaiah who is also the Chairman of the Coalition Co-ordination Committee.

READ ALSO  Chance to open Dasara was like securing a rank: Sudha Murty

Briefing reporters after the meeting, GTD said that for the first time, the full rehearsal of Jamboo Savari with elephants and cultural troupes will be conducted along tthe processionroute from Mysore Palace to Bannimantap instead of restricting the rehearsal to the Palace premises.

However, the wooden howdah will be used on Howdah Elephant Arjuna instead of the Golden Ambari, he said. There will be no tableaux in the rehearsal, he added.

“Only select cultural troupes will participate in the Vijayadashami procession and rest of the troupes will be accommodated during the rehearsal. This is done to give an opportunity to all cultural teams to showcase their talent,” GTD said.

Sub-committees and Air Show: Like last year, there will be 16 events including Flower Show, Ahara Mela, Pustaka Mela, Raitha Dasara, etc. All the sub-committees will have five members from JD(S), five from Congress and five from BJP, he said.

The State Government has requested the Defence Ministry to hold a full-fledged air show for Dasara. State Chief Secretary has written to the Chief of the Air Staff and Air Marshal in Bengaluru. We are confident of Indian Air Force organising the show this year,” GTD said.

A vintage car rally will be one of the main attractions during Dasara. The rally will be flagged off on Sept. 30 in Bengaluru by Chief Minister H.D. Kumaraswamy at 8 am.

The cars will be exhibited in Mysore Palace premises and arrangements will be made at the Lalitha Mahal Palace Hotel for the rallyists to stay.

The next day (Oct. 1) the cars will proceed towards Chamundi Hill and a heritage tour of city landmarks is on cards.

The team will also visit the KRS  Dam. The rallyists will stay at Windflower Resorts on Oct. 1 and will leave to Bengaluru on Oct. 2.