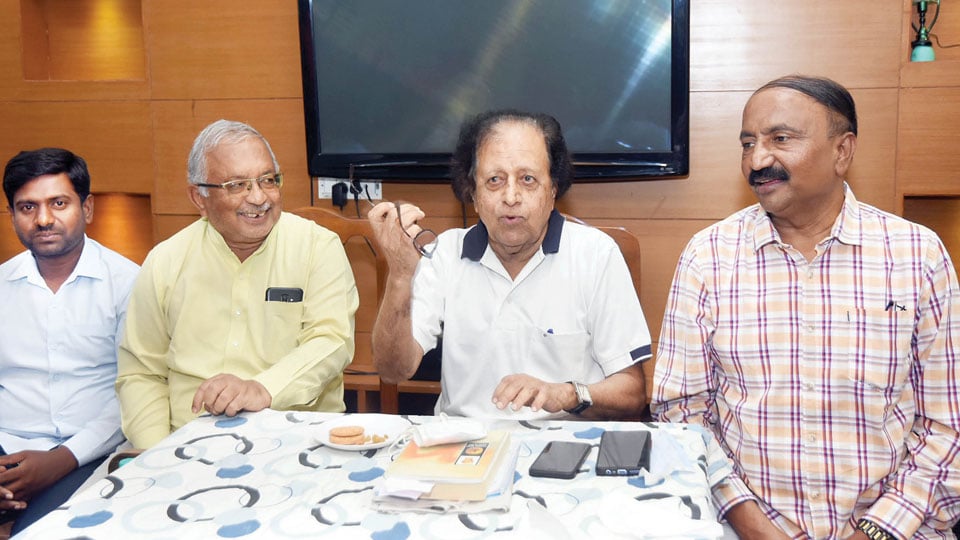 Mysore/Mysuru: Senior Congress leader and former Minister Prof. B.K. Chandrashekar (BKC) has called for an open discussion with BJP on the introduction of Bhagavadgita in school syllabus.

His party, Congress, has maintained that the present syllabus has been prepared by resourceful persons and there is no need to include anything now.

Addressing a press conference in city on May 5, Prof. Chandrashekar said that he was not opposed to the idea but religious texts of other faiths too must be taught.

“To describe Bhagavadgita as a moral text ignoring its religious aspects in a bid to introduce it in school curriculum and exclude other religious texts is wrong. We have texts of other religions too. Even writings of famous poets can be included in the syllabus. Let the BJP come for an open discussion on this and take a decision after honouring consensus. Let people from all walks of life and from all religions attend the discussion,” he said.

According to Primary and Secondary Education Minister B.C. Nagesh, Bhagavadgita has human values and children need to learn about those values. The Government of Gujarat has taken a decision to add Bhagavadgita in the syllabus and a decision will be taken in Karnataka also to introduce Bhagavadgita to children.

Prof. Chandrashekar chided the BJP for often raising emotive issues rather than focussing on governance. “Unemployment and polarisation in society on communal lines is affecting the middle class population and the COVID-19 pandemic left more than 10 million people jobless. Before the pandemic, 30 million youths were jobless and the BJP Government has not bothered to address the growing problem,” he said.

“The BJP is interested in polarising the society on the lines of caste and religion so that the real issues bothering the nation are camouflaged. The Government has maintained a stoic silence on the burning issues. The Government is pushing Hindutva agenda and if one hears the speeches of CMs of BJP-ruled States, it is clear what is there in their minds,” he added.

Shockingly, the agenda is to saffronise education and culture, he claimed. The Congress leader termed Chief Minister Basavaraj Bommai as a sober man but he was forced to implement the Hindutva policies.