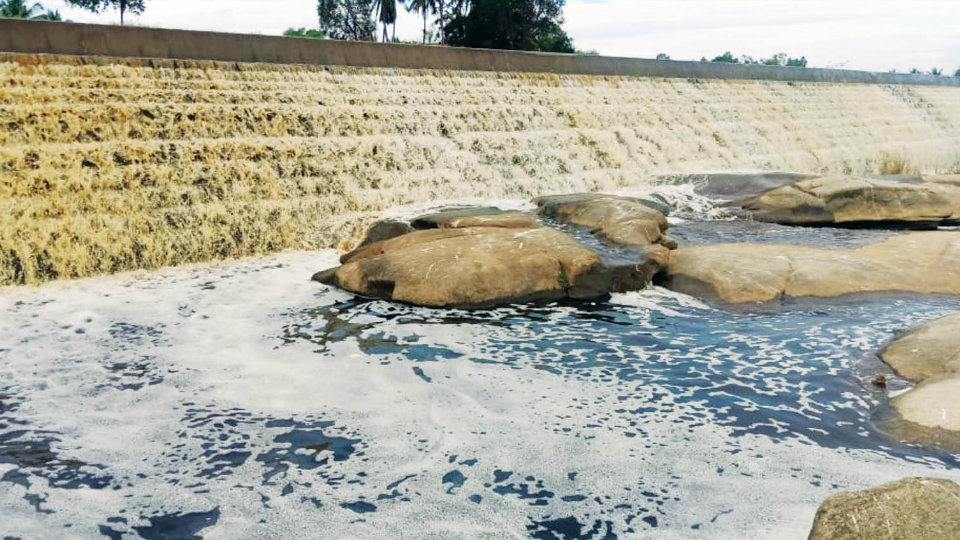 Mandya:  The Irrigation Department has extended the ban on using water from Shimsha River for drinking purposes as it is heavily polluted owing to explosion of a digester at NSL Sugars at Koppa near Maddur.

The river was polluted by more than 80-lakh litres of potassium-laced poisonous water that spilled from the NSL Sugar Factory at Koppa of Maddur taluk where a boiler exploded on Nov.20. The hazardous spent wash contaminated nearby fish ponds, river Shimsha, canals and several low-lying areas, besides spreading over of farmlands.

Presently, the Shimsha water can be used only for industrial and agricultural purposes. Hence, the ban has been extended for an indefinite period, officers of Superintending Engineer, Krishnaraja Sagar Modernisation and Medium Irrigation Planning Circle, said.

Despite a massive operation to clean the spent wash from pits and other low-lying areas, distillery waste can be seen accumulated in pits, ponds, low-lying areas and also on the banks of the Shimsha, officials said.

As the chemical containing untreated effluents in a large quantity had flowed out of the sugar mill and reached the river, it is not advisable to consume the Shimsha water, K.L. Savitha, District Officer, Karnataka State Pollution Control Board (KSPCB), said. The KSPCB officials, who visited the spot following the explosion, collected water samples of the river and sent it for testing. Officials stated that the water was not fit for drinking as it had potassium and sodium content. Samples were collected from Thigghalli Barrage, Kodihalla Natural Valley, Maddur-Shimsha River Road Bridge, Vaidyanatheshwara Bridge, Kokkarebellur Bridge and Iggaluru Barrage. Savitha said that they had collected samples of Shimsha waters from different places for tests. So far, laboratory reports on the quality of water have indicated that the water is not fit for drinking yet.

Untreated effluents from the sugar factory have destroyed sugarcane, paddy and ragi on hundreds of acres in Maddur and the villages that are majorly affected are Chikkonahalli, Annedoddi, Keelaghatta, UC Doddi and Gollara Doddi and surrounding areas. There are over 30,000 people residing in these villages.