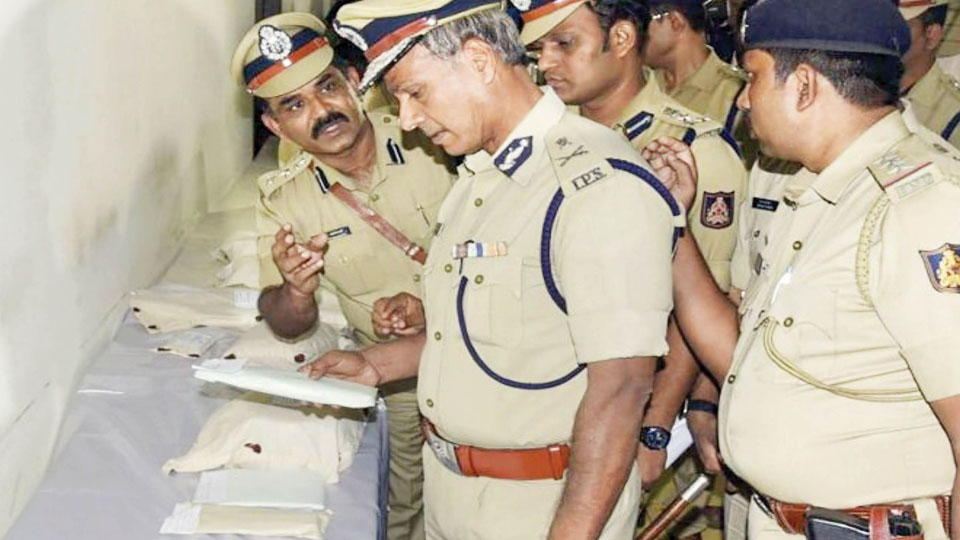 Mysore/Mysuru: Incriminating evidence collected from the rented room of Mohammed Shariq at Lokanayakanagar near Metagalli have been shifted to Mangaluru for the ease of investigation into the autorickshaw bomb blast case.

Wrapped in sealed covers, the materials were examined yesterday by Additional Director General of Police (ADGP), Law and Order, Alok Kumar and Mysuru City Police Commissioner B. Ramesh briefed him about the seized materials that can come handy to make an Improvised Explosive Device (IED). Mangaluru City Police Commissioner N. Shashikumar and other senior officers were present.

The materials that were seized included raw materials used for the bomb including a circuit board, a small bolt, battery, matchbox, sulphur, phosphorus, wooden powder, aluminium, multi-meter, wires, mixer jars, a pressure cooker and others. The Police have also found two Aadhaar cards, a PAN card, a debit card and a mobile at house.

Later, Alok Kumar told reporters that Mohammed Shariq was ‘influenced and inspired’ by a global terrorist organisation. “His handler was Abdul Mateen Taha from Suddaguntepalya (in Bengaluru) on whom the National Investigation Agency (NIA) has announced a reward of Rs. 5 lakh,” the ADGP said.

Taha was the ‘main handler’. He, along with Khwaja and Mohammed Pasha from Tamil Nadu, was booked under the provisions of Unlawful Activities (Prevention) Act at Suddaguntepalya in Bengaluru in 2020, the ADGP (Law and Order) Alok Kumar added.

Meanwhile, a team of officers from Tamil Nadu, led by a DIG-rank officer arrived in Mysuru yesterday to study the possible link between the Mangaluru blast and the blast that occurred in Coimbatore in October this year where one person was killed.

Accused Jameesha Mubeen, an engineering graduate, was charred to death when one of the cylinders in the Maruti 800, he was driving, exploded in Coimbatore on Oct. 23. Presently, the NIA is probing the case.

The team from Tamil Nadu visited Lokanayakanagar and interacted with the Mysuru City Police on the materials seized. The team gathered details of Shariq’s associates as during the investigation it was revealed that he had used the Aadhaar Card of a Coimbatore resident Surendran to obtain a SIM card. Reports from Tamil Nadu this morning said that as of now, the team has not found any evidence to link the Mangaluru and Coimbatore blasts.

As the case of the blast has been registered in Mangaluru, the Coastal City Police have formally arrested four persons connected to the blast. They are Mohammed Shariq who suffered 40 percent burn injuries and is recuperating at a Hospital in Mangaluru under tight Police security, Shariq’s associate Mohammad Ruvulla who was arrested in Bengaluru at D.J. Halli yesterday, another person named Syed Ahmed and the Lokanayakanagar house owner Mohan Kumar.

Both Syed Ahmed and Mohammad Shariq reportedly got trained in the mobile repair training centre at Agrahara and Syed had reportedly given more than 10 mobile phones to the accused Shariq.

In his statement to the Police, the owner of the mobile repair training centre said that while Syed Ahmed had completed the training and has even received his certification, Shariq has done only half the duration of the training.

Mohan Kumar, who owns the house in Lokanayakanagar, has been arrested as he failed to check the background of Mohammad Shariq who had given a fake Aadhaar Card while entering into a rental agreement. Moreover, the Police found that earlier, Mohan Kumar had rented the house for Rs. 500 while Shariq offered to pay a monthly rent of Rs. 1,800 for which Mohan Kumar readily agreed.