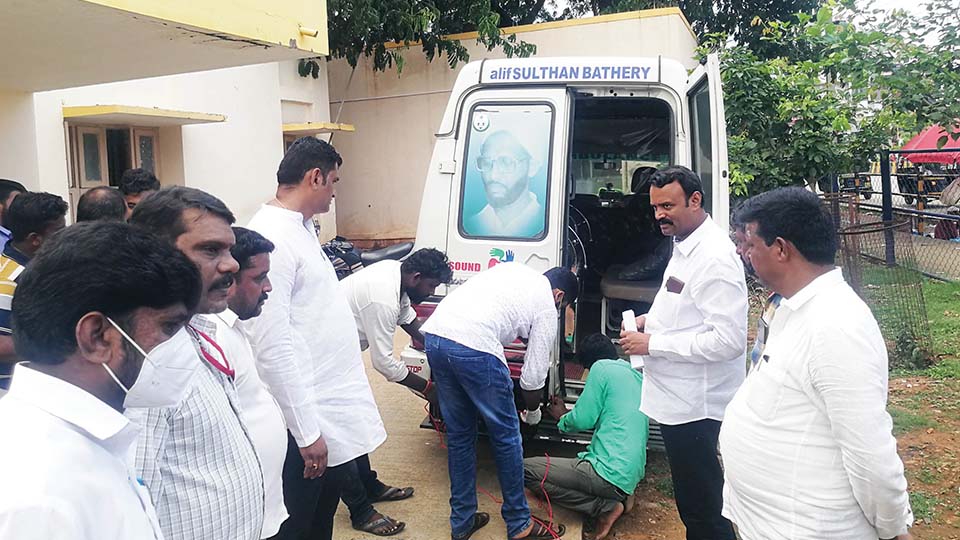 Chamarajanagar: Humanity hit a new low when hospital staff and a doctor of the Chamarajanagar District Hospital demanded Rs. 25,000 to conduct a post-mortem of a resident of Kerala who died in an accident at Gundlupet.

Hospital staff refused to do the procedure unless money was paid and kept the body for one-and-a-half days. Finally, the post-mortem was conducted after the intervention of RSS and BJP leaders. Now after the incident came to light, the Hospital authorities are speaking about action against the staff who demanded the bribe.

It may be mentioned that it is the same hospital where 24 COVID patients had died due to oxygen shortage in May this year.

Thirty-year-old Sreejith, a resident of Pavaretty Post, Pulleti House of Thrissur district in Kerala, died in an accident near Begur in Gundlupet on Thursday morning. He was in his car when a speeding tipper banged against the vehicle. Sreejith’s body was brought to the Chamarajanagar District Hospital for post-mortem.

The family members had sent some relatives and an ambulance from Sultan Batheri to take the body back to Thrissur after the post-mortem. However, the Hospital staff and a doctor demanded Rs. 25,000 to conduct the procedure. Having no alternative, the relatives pooled in Rs. 5,000 and paid to the staff.

Even after accepting Rs. 5,000, the doctor refused to conduct the post-mortem and demanded full payment of Rs. 25,000. Meanwhile, the body was lying in the Hospital mortuary and the relatives had to wait and scramble for money to cater to the greedy demands.

Left with no choice, the ambulance driver and the relatives called up their hometown and a few contacts including doctors and friends and narrated their ordeal and asked them to get the remaining money to be paid to the doctor and staff. The news spread and the Kerala RSS volunteers informed the RSS units in Bengaluru who in turn informed the Chamarajanagar RSS and BJP leaders.

They later contacted the Hospital staff and took them to task for forgetting humanity. Baffled by the sudden attack, the Hospital staff fumbled for answers and even returned the Rs. 5,000 that was taken from the relatives earlier. Dy.SP Priyadarshini Sanekoppa and team arrived at the Hospital and pacified the agitated crowd.

Later, the post-mortem was conducted and the body was shifted to Kerala in the ambulance. Speaking to Star of Mysore, Vrushabendrappa said that the Chamarajanagar District Hospital has become a den of corruption. “The relatives did not reveal the name of the doctor who demanded Rs. 25,000. Doctors and staff here have a habit of demanding bribes for small treatments and cases like these. I will bring the issue to the notice of the Health Minister,” he said.

While Resident Medical Officer of the Hospital Dr. Krishnaprasad said that the bribe was asked by an assistant staff and the issue has been ‘amicably settled’ now, District Surgeon Dr. Srinivas said that no one has lodged a formal complaint with him regarding the incident. “I have come to know of the incident and it will be probed, Action will be taken against the guilty,” he added.