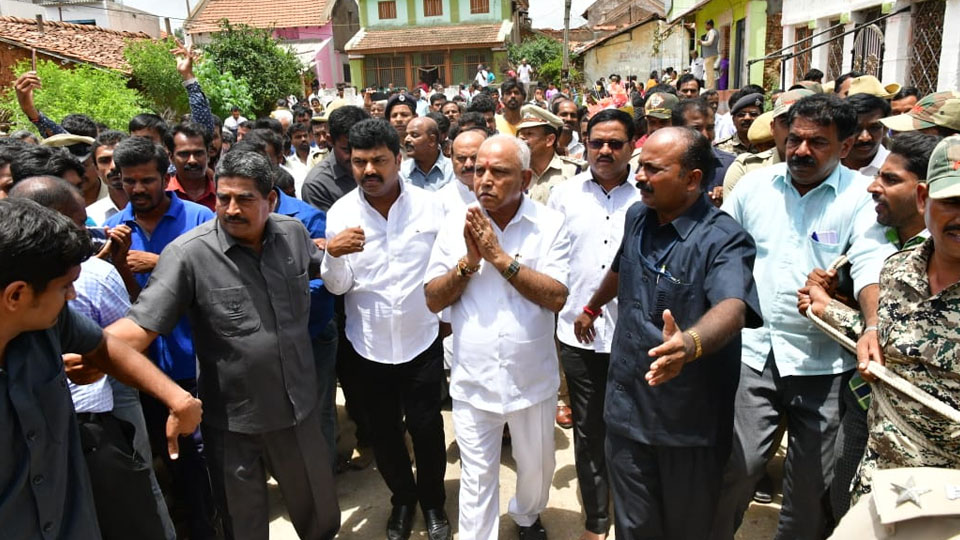 Bengaluru: Bookanakere Siddalingappa Yediyurappa (BSY) completed a full circle in his political career yesterday when he was sworn-in as Chief Minister of Karnataka for the fourth time.

Yediyurappa, credited with establishing BJP as a force in South India, will prove his majority by July 29 in the 225-Member State Legislative Assembly. The new Council of Ministers will be named after the trial of strength, he told reporters.

Yediyurappa began his political career as a Councillor in Shikaripura Municipality in 1965 and built BJP in Karnataka, its solitary bastion in the South. In 2008, BJP came to power on its own for the first time in a State in South India.

Yediyurappa was elected as MLA from Shikaripura, his home segment and went on to become Deputy Chief Minister, Lok Sabha Member as well as Chief Minister, in his over four decades of public life. A die-hard fighter, he made his mark when he led a padayatra from Shivamogga to Bengaluru taking up the issues of farmers. He was imprisoned during Emergency.

He became CM in November 2007 for the first time but his stint lasted only seven days as its ally JD(S) decided not to support his Government. He had the last laugh, though, when he led the BJP to emerge as the single largest party in the 2008 Assembly elections with 110 seats.  Yediyurappa formed the Government by securing the support of five Independent MLAs.

The veteran leader, however, had to resign following charges of illegal mining and denotification of revenue land in 2011. Thereafter, he floated his own party Karnataka Janata Paksha (KJP). In the 2013 Assembly elections, the BJP fared miserably after the split.

Ahead of the 2014 Assembly elections he returned to his parent party, after Narendra Modi-led BJP stormed to power at the Centre. After merging his KJP with the BJP, Yediyurappa was elected to the Lok Sabha with a huge margin of over 3.25 lakh votes from Shivamogga.

Ahead of the 2018 Assembly elections, he chose to return to State politics. In the polls, BJP emerged as the single largest party securing 105 seats and staked claim to form the Government but could not muster the required number to prove majority in the House. Congress and JD(S) came together to form a coalition government but it collapsed.

During the NaMo wave, Yediyurappa ensured BJP’s victory in 25 out of 28 Lok Sabha seats in the high-tech hub.  The JD(S)-Congress Coalition Government was mired in infighting and was reduced to a minority when 16 MLAs of the coalition resigned.