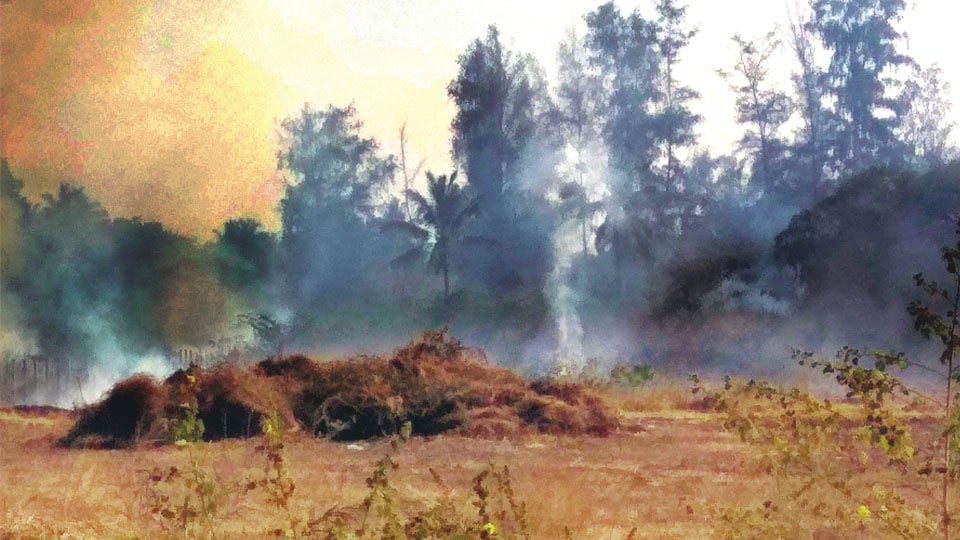 Mysore/Mysuru: Despite the ban on burning waste, including leaves, in public spaces, the pollution-causing practice has picked up in the last few weeks as summer is fast approaching. The cycle repeats itself every summer and this season is no different.

Residents from several neighbourhoods, especially in Vijayanagar First Stage, along the factories on KRS Road, Gokulam, Vijayanagar Third and Fourth Stage, Garudachar Layout, Hebbal, Metagalli and other outer zones that have revenue sites, MUDA and MCC Layouts and vast CA sites, have reported a rise in leaf burning and the resultant deterioration of air quality.

Officials in the Fire and Emergency Services too said there has been a spike in small fires, but most of them are put out locally.  Usually, biomass waste, particularly dry leaves that are generated in voluminous amounts round the year are burnt at vacant spaces just before summer.

“This is a menace is at a time we are grappling with summer heat,” said Kashi, a resident of a posh apartment on KRS Road near Metagalli next to a factory where dry waste is often burnt.

Residents of Garudachar Layout in Vijayanagar Third Stage, as a last resort, have filed a Police Complaint in Vijayanagar Station asking Police intervention to solve the problem of burning dry waste and plastic at Bogadi Lake. Earlier, the residents had complained to Mysuru City Corporation, Karnataka State Pollution Control Board but no action has been taken.

The Police complaint has been filed on Feb. 5 and it states, “Dry waste is being burnt on a daily basis at Bogadi Lake vacant land. It seems that the waste collected from various places from the city is dumped here and burnt every day. The amount of smoke that this generates is enormous, thereby causing severe breathing problems for all the residents staying in the adjacent localities.”

Swaroop Vempati, a resident of Garudachar Layout told Star of Mysore that the amount of smoke is such that its effect remains inside houses for many hours. “This is causing many health issues for residents across all ages. Residents going for evening walk, kids playing outside, people coming back to home after work, elderly people staying at homes, infants, environment and birds all are getting affected this. And we are prone to severe lung infections, asthma, respiratory disorders and breathing problems. Lack of oxygen content in the air during the nights is even more dangerous. We can’t even open our doors and windows,” he explained.

Leaf burning is banned because it leads to air pollution, health problems and fire hazards. Leaf smoke may also contain hazardous chemicals such as carbon monoxide, which can bind with haemoglobin in the bloodstream and reduce the amount of oxygen in the  blood and lungs.

Residents said leaf burning has become routine and blamed the Mysuru City Corporation (MCC) for its inability to stamp down on it.

Mayor reacts:  Mayor Tasneem Bano told SOM that this leaf burning is a problem that occurs every summer where residents burn waste and dry leaves. “We will form a health team headed by MCC Health Officer Dr. D.N. Nagaraj and will identify residents who have dry waste accumulated in their sites and issue notice to them,” she said. The MCC will also penalise such site owners who set fire causing pollution.

ONE COMMENT ON THIS POST To “Burning Problem : Rampant rise in burning of dry leaves, grass in public spaces”