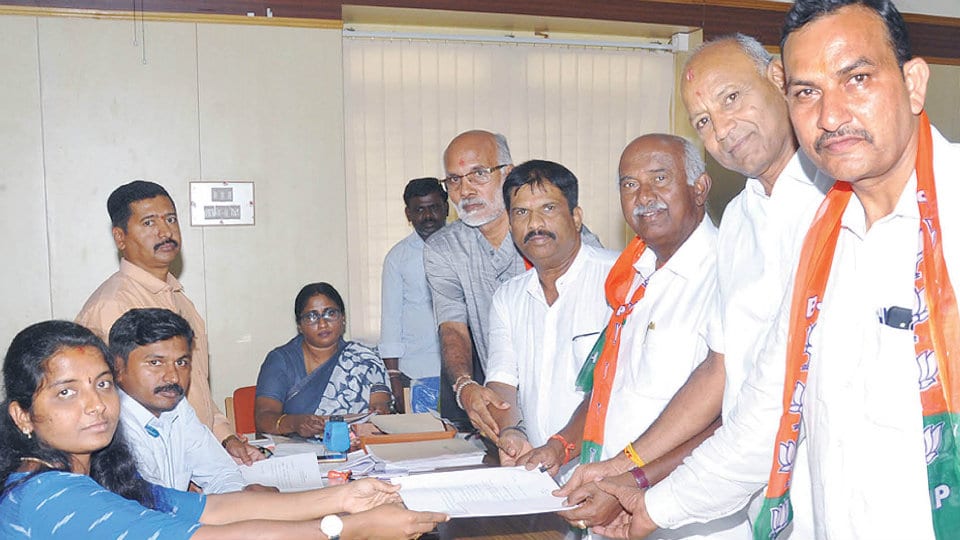 With the three major political parties announcing their candidates late, it was a last minute rush at many places. Many candidates went in processions, accompanied by a large gathering of supporters giving rise to a scenario of colour, crowds and chaos at the nomination venues.

It was a show of strength by 11 disqualified candidates seeking re-entry to the Assembly on BJP tickets. They held huge rallies in their constituencies with senior BJP leaders, while Congress candidates filed nominations in the presence of Opposition Leader and former Chief Minister Siddharamaiah, senior Congress leader D.K. Shivakumar and several other leaders and JD(S) candidates in the presence of former CM H.D. Kumaraswamy and other top leaders.

In an interesting development at Gokak in Belagavi, three nominations were filed between  brothers Lakhan Jarkiholi and Satish Jarkiholi. Lakhan, the official candidate of the Congress, filed his first set of nominations in the presence of Khanapur Congress MLA Anjali Nimbalkar, while his elder brother Satish Jarkiholi, who is a sitting Congress MLA from Yamakanamaradi, also in Belagavi, filed his papers after taking out a colourful rally.

Sources said that Satish, who is hell-bent on defeating his brother Ramesh, the BJP candidate in Gokak, has filed nomination only as a dummy candidate, so that the Election Commission officials would not ask him to leave the constituency two days before the polling date. Also, he could cut down his younger brother and Congress candidate Lakhan’s poll expenses by declaring them as his poll expenses.

Meanwhile, in a shock to the BJP, a Lingayat Mutt Seer, filed nominations as JD(S) candidate from Hirekerur in Haveri.

Sri Shivalinga Shivacharya Swamiji of Kabbinakanti Mutt, Rattihalli, who had decided not to contest on Saturday, changed his decision on Sunday after reportedly consulting the JD(S) High Command. The Seer, who has a sizeable following, is likely to give a tough fight to BJP’s B.C. Patil, as both belong to the Lingayat community. B.C. Patil also got his daughter Shruti Patil  file her nominations at the last minute, as there were apprehensions about the possible rejection of his nomination papers over technical errors.

In Hosakote in Bengalurur Rural, JD(S) has extended support to Sharath Bachegowda, who is contesting as an Independent candidate. Sharath, who is the son of sitting BJP MP from Chikkaballapur B.N. Bachegowda, was denied the party ticket by BJP which has fielded MTB Nagaraj, another disqualified Legislator who had earlier represented the constituency as a Congress MLA.

In Bengaluru, senior politician Roshan Baig, one of the 17 disqualified Legislators, who has been left stranded after being denied entry to BJP, has decided to stay away from electoral politics for now. Baig, who was a Congress Legislator from Shivajinagar, had hoped to get the BJP ticket. But with the sword of IMA scam hanging over Baig’s head, BJP was reluctant to induct him to the party. Now, Baig may indirectly support the BJP candidate Saravana and ensure the defeat of Congress candidate Rizwan Arshad from Shivajinagar.

In K.R. Pet (Mandya), tension prevailed for some time when JD(S) workers bombarded BJP candidate K.C. Narayanagowda with party flags and slippers when he had come to the Tahsildar’s office to file his nomination papers. On Monday, K.R. Pet town witnessed huge rallies and the Police had a tough time in controlling the crowds.

Congress’ H.P. Manjunath, a two-time former MLA, had filed his nomination last week. The constituency is witnessing a tight three-cornered contest, as BJP, Congress and JD(S) have taken the constituency as a prestige issue and are making all-out efforts to woo the voters.

The scrutiny of nomination papers will take place today and the last date for withdrawal of nominations is Nov.21.The polls will be held on Dec.5 and the counting of votes will be on Dec.9.