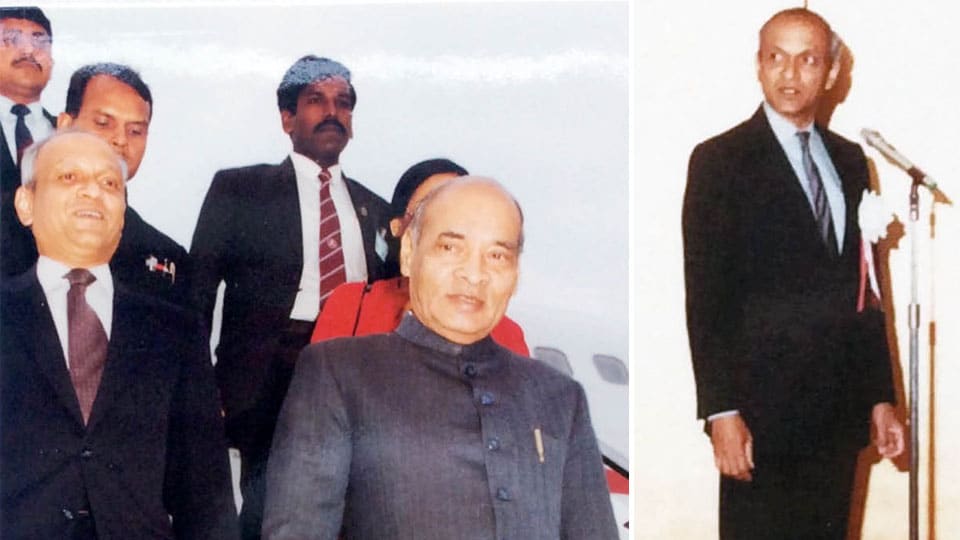 My abiding memories of Japan, apart from the friendships formed there, are of the art and aesthetics of the country. My husband, A. Madhavan, was posted as Indian Ambassador to Japan in 1985. Before we left Japan in 1988, a “Festival of India” was celebrated there featuring Indian classical and folk art, music, dance, films, textiles and crafts, the events being held in many Japanese cities. For me it was an exciting chance to meet great Indian artists.

The “Festival of India” was the creative concept of Pupul Jayakar [1915-1997], the Doyenne of Indian art and recipient of the Padma Bhushan. She wrote a biography of J. Krishnamurthi and one of Indira Gandhi. Her book, “The Earthen Drum”,  about the ritual arts of rural India, is an analysis of our folk art and the philosophy behind it. The Festival of India in 1988 was inaugurated by P.V. Narasimha Rao [then Foreign Minister] along with Pupul Jayakar, the Festival Committee as well as the artists who were participating in the cultural events.

It opened with an Odissi dance recital in the Imperial Palace by Guru Kelucharan Mohapatra.On the stage was a very large free-style flower arrangement created without pinholders; beautiful but so delicately balanced it could fall if touched. A moment of tension for the Japanese organisers was when Guru Kelucharan decided  to use it as a prop. With graceful movements he went behind it peeping out between the branches acting a shy maiden sighting her lover. A wilted bloom drifted from a spray of flowers. At that point, the artist moved to centrestage to render a classical recital and everybody relaxed.

Birju Maharaj at first found the Japanese unresponsive as they observe the western etiquette of quiet during any recital. He twirled about, highlighting the end of the sequence. After a particularly brilliant scene, Madhavan clapped; thereupon the audience took the cue to show their appreciation. Malavika Sarukkai too charmed the audience with her beauty and her consummate artistry.

The special stage sets featured antique hanging lamps, woven backdrops of textiles or bamboo; the spare decor appealing to the Japanese who like minimalistic effects. Manipuri dancers in glittering costumes and the fast twirling and acrobatic presentations of young men from the North-East like “Dhol Cholam” and “Pung Cholom” were very popular. Vidwan V. Doraiswamy Iyengar, accompanied by his son and four other Vainikas, presented an exquisite concert, with six ornate veenas and percussion instruments on-stage. A textile exhibition with choice items from textile museums in India was presented by Martand Singh. The Japanese who prize their ancient technique of Shibori [ordinarily called resist dyeing] were interested in the similar Indian Ikkat.

Actor Rajnikanth’s popularity in Japan started in 1998 when a film of his, dubbed in Japanese, was shown. He has a cult following there now, Japanese fans flying  to India to see his new releases. However, for the Festival art films, from India were selected, the first being “Panchavati” directed by Basu Bhattacharya, starring Deepti Naval and Suresh Oberoi, with the theme of domestic infidelity. We invited them home. Charmed by their informality, we had an evening of singing old film songs together and chatting.

“Govindan Aravindan” or G. Aravindan’s films were also shown. He too came home to dinner, a gentle, bearded  presence clad in jeans and T-shirt which gave no indication of his lyrical imagination that could transport one to other worlds. We met him in Tokyo in 1988 but by 1991 he had passed away, leaving a void in the world of art cinema. His films “Esthappan”, “Kummatty”, “Chidambaram” and “Kanchana Sita” had themes and visuals never to be forgotten.

Some of the exhibitions in the Festival of India lasted for a long time like the exhibition of tribal art  in the “Mithila Museum” of Niigata, Japan. The artist, J. Swaminathan [1928-1994] came from India to set up and curate it.  As he passed through Tokyo, we invited him home to meet some Japanese guests. On our sitting room wall was an oil painting on loan to us from the Ministry of External Affairs: a triptych of a tree with a bird soaring in the sky by Swaminathan himself. We thought he would be happy to see his painting but did not expect his ecstatic response to the picture.

Ignoring the bows of the Japanese guests, he went right up to the painting with upraised hands stretched towards it. “Oh! There you are,” he cried. “I gave you away. I thought I had lost you for ever and now I find you here!” At that moment, intense emotion suffused him. This was heightened when it was discovered that he was a distant relation of Madhavan’s, whose Aunt “Lahore-Papu” had given Swaminathan his first box of paints, a pointer to his artistic career in  later life.

Swaminathan’s ardent involvement in his own art, helped him to see the beauty of other genres and to help struggling artists. He recognised the talent of a young Gond tribal artist, Jangarh Singh Shyam from the village Patangarh, Madhya Pradesh. Shyam was a “Pardhan” or a bard singing of the Gond way of life. He also painted on walls for weddings and wakes using the symbolism of his tribal ethos. Swaminathan took him to Bharath Bhavan in Bhopal where he discovered synthetic colours. Thereafter his career saw a meteoric rise, his paintings an amalgam of glowing colours, tribal symbolism and the artist’s own  imaginative composition. He was invited to a residency at the Mithila Museum in 2001 in Niigata for a three-month stay. But the pressures of life in Japan, away from his own serene way of tribal life, proved too much for him to bear and he took his own life in an alien country. “Invisible Webs…”, a book by film-maker Amit Dutta is a moving account of Shyam’s life.

The Japanese Culture Ministry has been holding its own festival in Indian venues with events like “Cool Japan” which had a great success. India responds with “Namaste India” in Japan. Long may these cultural and artistic exchanges continue to nurture and enrich our lives.