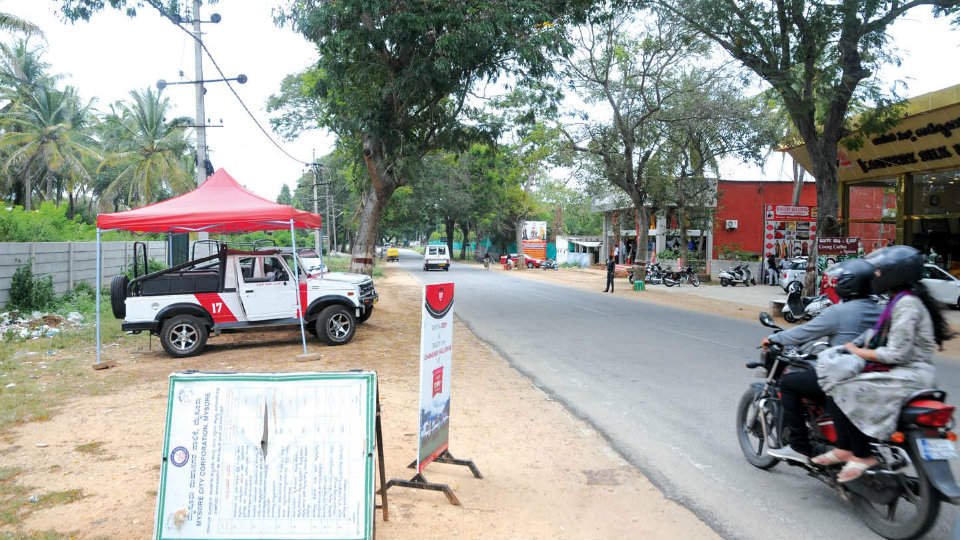 Mysuru: As Dasara is approaching, numerous hawkers from outside Mysuru descend upon city to sell their wares. Also, temporary businesses sprout beside roads frequented by tourists. One such road that is being occupied on either side by businesses and turning the beautiful and serene road into a marketplace is the Chamundi Hill Main Road.

As many businesses are popping up on this road, it has led to random and haphazard parking, causing obstruction  to the smooth movement of traffic. While there are many brick-and-mortar shops, new mobile businesses have also cropped up along the road. Many commuters on this particular road told Star of Mysore that the road, which was otherwise peaceful and a pleasure to drive, has turned into a noisy, chaotic business hub similar to other commercial streets of Mysuru.

All along the road from Kurubarahalli Circle (Sangolli Rayanna Circle) till the Tavarakatte Gate, there are many make-shift shops and tents competing with regular shops to sell products that include handicrafts, sarees and textiles, snacks and refreshments and also meat. And there is a ‘jeep tour’ set up along the road that takes tourists on a city tour. Tourists come here and park their vehicles on the road sides and then take the open jeep to go around.

Regular commuters on this road allege that vehicles block the road sides by random parking and it is tough to navigate when vehicles come from the opposite side. Raising their objections, commuters ask how the authorities could permit businesses to operate here.

When Star of Mysore spoke to Deputy Commissioner Abhiram G. Sankar in this regard, he said that he was not aware that businesses are operating on the Chamundi Hill Main Road but since the issue was brought to his notice, he would send the RTO West Prabhuswamy immediately to the place and check and if required, action would be taken.

He said that the road would be kept obstruction-free as he did not want traffic snarls during Dasara, which would inconvenience tourists. 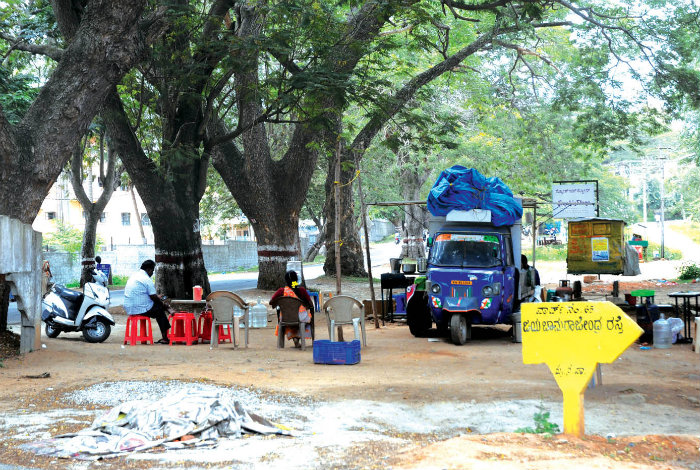 RTO West Prabhuswamy said that he had not visited the Chamundi Hill Road. However, he said that since the vehicle tours were operating with Yellow boards, they could not enforce any restrictions on them as they were tourist vehicles.

“The organisers have paid tourist tax to the government. In Mysuru, there are many buses and tour operators who take tourists on a city tour and we cannot restrict them,” he said. If the vehicles are causing traffic jams, the Traffic Police have to initiate action, he added.

MCC Commissioner K.H. Jagadeesha said that businesses are not allowed to operate on footpaths and it applies to both hawkers and businessmen. “The Abhaya teams are moving around the city clearing footpath vendors. Businesses cannot obstruct traffic in any way and the Police will have to take action against violators,” he said.

This then begs the question, can any tours and travels company use footpaths to run businesses on all the main roads leading to tourist centres? Then can all the roads leading to Krishna Raja Sagar Dam be lined up with taxi companies offering their tour packages? Why even have an office?

“Can anyone set up any business on Chamundi Hill Road? Already other travel companies, mutton stalls and hawkers have set up their business on this road that leads to a pilgrimage and a tourist centre. And as Dasara approaches, many more businesses will occupy their space here.

At this rate of official apathy, this important road is sure to turn into an eyesore soon like the messy M.G. Road near JSS Hospital. So much for clean Mysore initiative,” say commuters.

Reacting to SOM on the obstructions caused by businesses on Chamundi Hill Road, City Police Commissioner Dr. A. Subramanyeswara Rao said that he will instruct his officers to take immediate action if commuters are inconvenienced on the stretch.

“While footpaths come under the jurisdiction of the MCC, traffic comes under our purview. I will ask DCP (crime and traffic) Dr. Vikram V. Amathe and the jurisdictional Siddhartha Traffic Police to immediately look into the issue. If found flouting rules, businesses will be vacated today itself,” he said. If vehicles and businesses are found encroaching footpaths, the Police Department will write to the MCC to vacate the same, he added.