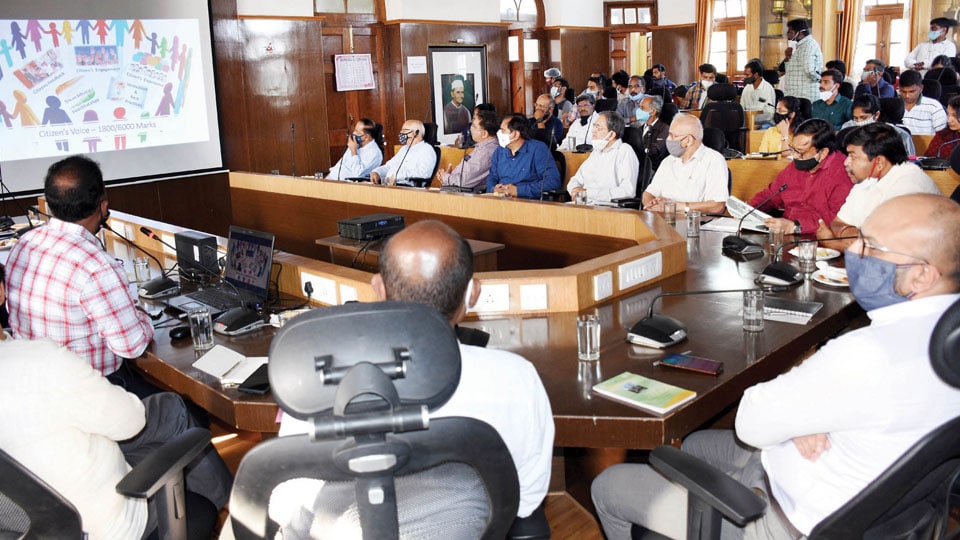 Mysore/Mysuru: A stakeholders meeting was held regarding the on-going Swachh Survekshan-2021 where the aspect of daily cleanliness and active public participation was stressed upon for Mysuru to regain the Numero Uno place in Swachh Bharat rankings.

The meeting was held at the Old Council Hall last evening where there were discussions on change in the mindset towards cleanliness. Public, stakeholders, Mysuru City Corporation (MCC) elected representatives and officials and voluntary organisations were part of the meeting and valuable suggestions were given to improve the rankings.

Chief among them was awareness about cleanliness. Though the onus of keeping the city clean primarily rests on the MCC, public participation too was stressed. Public participation and voluntarism have been the hallmarks of Swachh Bharat Abhiyan and the reason for its success.

Participation of people, hard work of sanitation workers, innovative steps taken for waste management and its processing and key financial measures helped cities like Indore in Madhya Pradesh get the top position in the Swachh Survekshan-2020 for the fourth time in a row, the meeting was told.

Swachh Survekshan has become a public movement. “It is imperative to understand that rankings are not solely based on solid waste management. It takes several other factors into consideration like sanitation, citizen feedback on cleanliness of public places, direct observation of a variety of indicators. Therefore, a city has to perform well on all fronts to secure a high rank. For this, public too must join hands with the MCC and the elected representatives must goad people towards keeping their surroundings clean every day,” said Prof. K.S. Nagapathi.

Public consultation remains the core of creating a robust waste management system. Only that can trigger critical behaviour change. Over time, the masses will change their behaviour and adopt new practices which are more sustainable and help in keeping a city clean – this is the core idea behind the survey exercise, another participant opined.

Participants also stressed the need to have a strong information, education and communication strategy aimed at inducing behaviour change among citizens. Creating targeted and engaging campaigns for relevant stakeholders is crucial and plays a key role in determining the outcome of any project, they opined.

Mysuru Choultry Owners’ Association President Sathyanarayana suggested repairs of many dilapidated bus shelters that are marring the beauty of those particular areas. Mike Prakash suggested that the residents must take a proactive role like reporting to the MCC about people who dump waste indiscriminately on roadsides.

Leela Venkatesh of Clean Mysore Foundation highlighted that tiles put on several pavements in the city have come out and this has been found on the roadsides even at the heart of the city. “Most people dump garbage below trees and street corners. This must be curbed at any cost. Also, awareness must be created among shopkeepers to use paper bags or cloth bags instead of plastic,” she added.

Several suggestions were put forth on constructing more toilets especially for women and improvements and beautification of parks, weed growth and garbage dumping on vacant sites and along the Outer Ring Road. “We have conducted month-long campaigns of picking up plastic waste around Mysore Palace. But unfortunately, people continue to dump plastic in this heritage location,” said Deepak of Namma Mysuru Foundation.